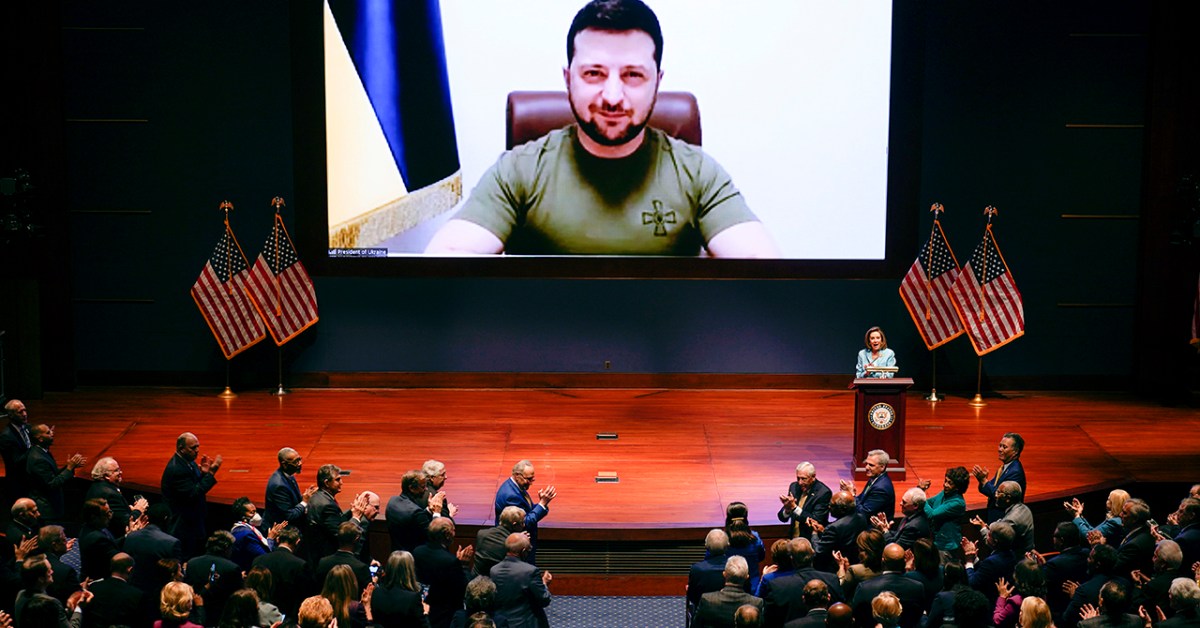 Weeks after Russia invaded his country, Ukrainian President Volodymyr Zelenskyy draws overwhelmingly positive ratings from the American public for his handling of international affairs. Around seven-in-ten Americans (72%) have a lot or some confidence in Zelenskyy, higher than any other international leader asked about in a new Pew Research Center survey.

Russian President Vladimir Putin receives dismal ratings, with only 6% of US adults expressing confidence in him following his decision to invade Ukraine – an all-time low in surveys going back nearly two decades. The vast majority of Americans (92%) have little or no confidence in Putin’s handling of world affairs, including 77% who have none at all.

More than half of Americans have confidence in two of Europe’s most prominent leaders, French President Emmanuel Macron (55% confidence) and new German Chancellor Olaf Scholz (53%), according to the survey of 3,581 US adults, conducted March 21-27. American confidence in Scholz’s international abilities is 10 percentage points lower than former German Chancellor Angela Merkel’s final year rating of 63%.

Pew Research Center conducted this study as part of a larger look at foreign policy attitudes among Americans. The questions shown here assess confidence in international leaders. For this analysis, we surveyed 3,581 US adults from March 21 to 27, 2022. Everyone who took part in this survey is a member of the Center’s American Trends Panel (ATP), an online survey panel that is recruited through national, random sampling of residential addresses. This way nearly all US adults have a chance of selection. The survey is weighted to be representative of the US adult population by gender, race, ethnicity, partisan affiliation, education and other categories. Read more about the ATP’s methodology.

Here are the questions used for the report, along with responses, and its methodology.

Chinese President Xi Jinping continues to receive poor ratings, with only 15% of Americans expressing confidence in him. Ratings for the Chinese leader have not changed over the past year.

Americans are closely divided over their own president’s handling of international affairs: 48% say they have confidence in President Joe Biden in this respect, while 52% say they have not too much or no confidence at all. As with Biden’s overall approval rating, attitudes about his handling of global affairs have turned more negative since the beginning of his term, when six-in-ten US adults expressed confidence in him. Democrats and Democratic-leaning independents express vastly more confidence in Biden’s international abilities (75%) than do Republicans and Republican leaners (16%).

The public has less confidence in Vice President Kamala Harris’ handling of international affairs than it does in Biden’s. Only 43% of Americans have confidence in Harris to do the right thing regarding world affairs, while a majority (56%) express little or no confidence in her. Harris has been dispatched to Europe multiple times during the Ukraine crisis, including to the Munich Security Conference in the days before Russia’s invasion.

In the month since the start of a bloody defensive war with Russia, Zelenskyy has mobilized Ukrainian forces to repel the invasion and urged Western powers – the United States in particular – to provide his country with more arms and aid. Americans appear to look favorably on the Ukrainian leader’s actions to date: Among the 72% who voice confidence in Zelenskyy to do the right thing regarding world affairs, a third express a lot of confidence in him. Only about a quarter of US adults (26%) have little or no confidence in the Ukrainian leader.

Older Americans are much more confident in Zelenskyy’s leadership abilities than younger generations. In fact, almost half of Americans ages 65 and older have a lot of confidence in Zelenskyy, compared with 28% of adults under 30. Americans with more education, especially those with postgraduate degrees, are also more inclined to have confidence in the Ukrainian president.

Partisan differences over Zelenskyy are relatively muted, in line with the public’s broader attitudes about the Russian-Ukrainian conflict. Still, Democrats and those who lean toward the Democratic Party are more likely than Republicans and Republican leaners to have confidence in Zelenskyy (80% vs. 67%).

Putin, for his part, draws the least confidence from US adults among the global leaders included in the survey. The share of Americans (92%) who say they do not have confidence in Putin is the highest recorded in Pew Research Center surveys.

During former President Donald Trump’s administration, partisan divides administration emerged over Putin, with Republicans more confident in his leadership than Democrats. But in the wake of Russia’s invasion of Ukraine, views of Putin have converged, with about equal shares of Democrats and Republicans saying they do not have confidence in the Russian president (94% and 92%).

Partisan divides are more evident when it comes to assessments of world leaders other than Putin. For instance, about two-thirds of Democrats voice confidence in Macron and Scholz, while only about four-in-ten Republicans say they have confidence in each European leader. Ideology is a major factor in partisans’ assessments of Macron and Scholz, with conservative Republicans reporting the least confidence and liberal Democrats reporting the most.

Note: Here are the questions used for the report, along with responses, and its methodology.