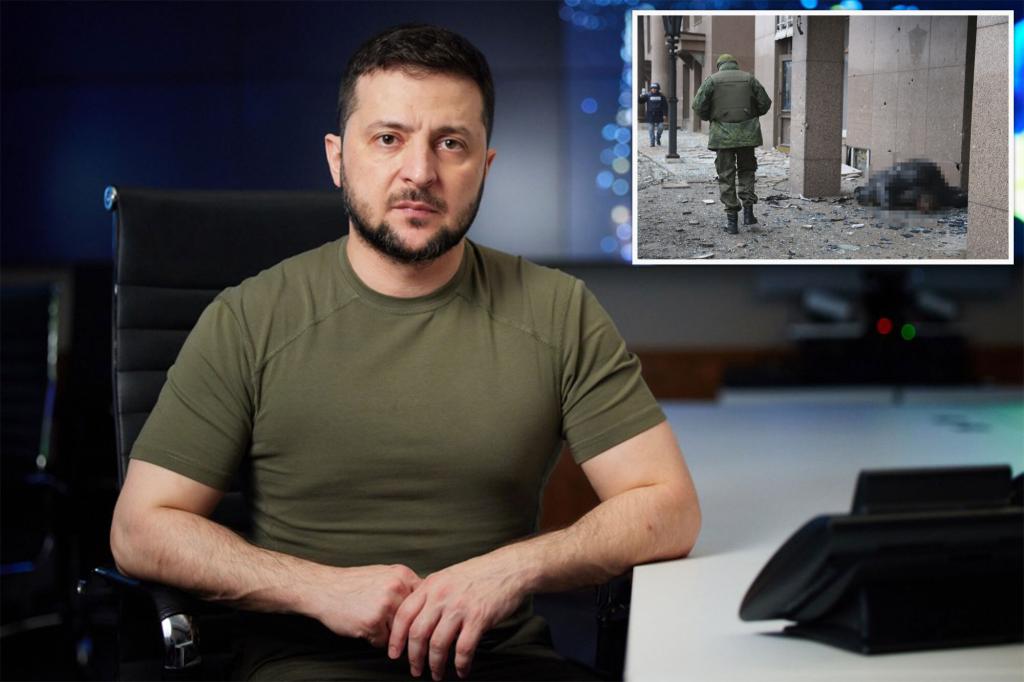 Ukraine President Volodymyr Zelensky touted “slow but noticeable” gains in some regions of his invaded country, but warned many dangers lay ahead as he accused Russian soldiers of booby-trapping abandoned houses and dead bodies.

The leader relayed the updates during a YouTube address posted on his office’s website early Saturday in Ukraine. He also used dark sarcasm to warn Ukrainians of “silly” April Fools’ Day jokes being perpetrated by Russia.

“This day, April 1, the occupiers decided to mark with two equally silly jokes. One such joke is about people in Russia,” he wrote on his office’s website early Saturday, explaining that the Russian army had started drafting young troops to replenish the ranks of its depleted military.

“This year’s conscripts can be sent to war against our state, against our people. So, this is a guaranteed death for many very young guys,” Zelensky said.

“We don’t need more dead people here. Save your children so that they do not become villains. Don’t send them to the army. Do whatever you can to keep them alive. At home.”

Zelensky also warned that Russia was trying to poach troops from the annexed Crimea region, which he called a “war crime.” The president urged the people of the disputed territory not to follow orders and surrender to Ukraine.

The second “joke” Russia allegedly played Friday was by appointing temporary leaders or “Gauleiters” in parts of southern Ukraine.

“Justice will be restored. Therefore, everyone who became a Gauleiter can already register somewhere in Rostov,” he said, referring to a massive Russian cemetery.

“This is the last warning.”

Zelensky went on to share some encouraging news in the lengthy blog post, saying more than 6,266 Ukrainians were rescued in humanitarian corridors in three regions, with nearly half of them freed from Mariupol, which had fallen under Russian control this week.

The president also noted that the situation was improving in some areas of the country, but remained “extremely difficult” in areas near the Russian border, where invaders were fortifying their position.

“The occupiers are withdrawing forces in the north of our country. The withdrawal is slow but noticeable,” Zelensky said.

Zelensky urged Ukrainians returning to their homes to be vigilant, warning that bombings may continue and accusing Russians of mining tripwire on “houses, equipment, even the bodies of killed people.”

“Hard battles lie ahead. Now we cannot think that we have already passed all the tests. We all strive for victory. But when it comes everyone will see it. Everyone will feel that peace is coming.”

In his message, Zelensky continued to plead with NATO countries to step in and help them fight Russia.

He renewed his plea for President Joe Biden to help provide his military with Soviet-era warplanes during a Friday interview with Fox News.