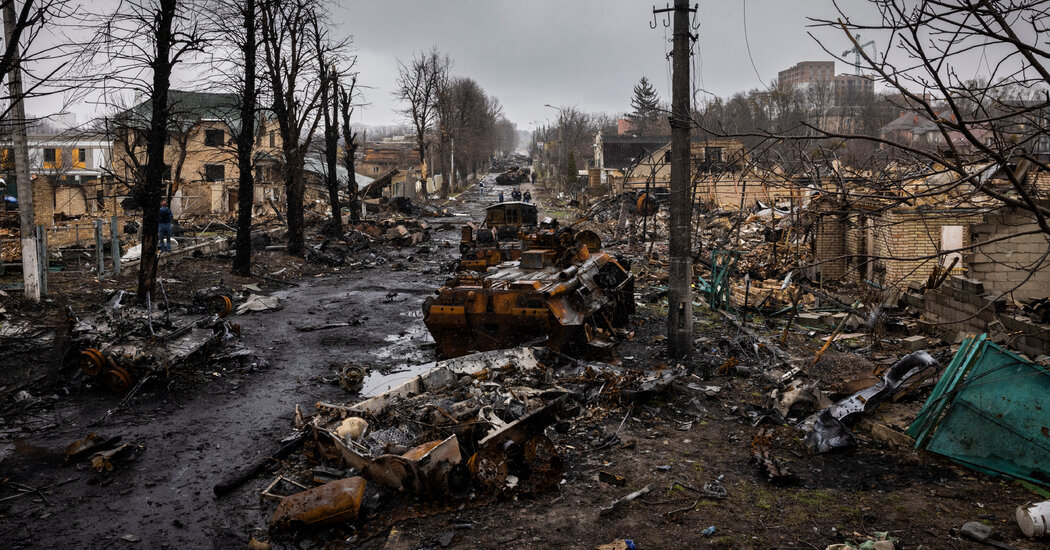 ‘They shot everyone they saw’

Growing evidence of Russian atrocities against civilians in Ukraine has brought home the horrific toll of the war, prompting world leaders to threaten even harsher sanctions, including a lockout of Russia’s vital gas industry, a step some had been loath to take. Follow the latest updates from the war and maps of the invasion.

Ukrainians in Bucha, a suburb of Kyiv, have found scores of bodies in yards and on roads as evidence of intentional and indiscriminate killings of civilians has mounted. One coroner said his team had collected more than 100 bodies. “They shot everyone they saw,” one resident said of the Russian forces.

Human Rights Watch said it had documented “apparent war crimes” by Russian forces against Ukrainian civilians in the occupied areas of Chernihiv, Kharkiv and Kyiv. In a new report, the organization describes cases of laws-of-war violations including rapes and killings as well as other episodes of unlawful violence and threats against civilians.

Quotable: “The Russian authorities will have to answer for these crimes,” said France’s president, Emmanuel Macron. Poland’s prime minister, Mateusz Morawiecki, called the actions of the Russian Army “acts of genocide.”

In other news from the war:

Imran Khan, the prime minister of Pakistan, dissolved Pakistan’s National Assembly and called for new elections yesterday, blocking a no-confidence vote that was widely expected to remove him from office.

The extraordinary move deepened the weekslong political crisis that has gripped Pakistan after Khan lost the backing of the country’s powerful military and a coalition of opposition parties.

The crisis threatens to destabilize the fragile democracy in Pakistan, a nuclear-armed nation that has long struggled with instability and military coups. Since Pakistan gained independence in 1947, not one of its prime ministers has completed a full term.

Opposition lawmakers lodged a petition challenging Khan’s move before the country’s Supreme Court, saying that it amounted to an “open coup against the country and the Constitution.” A hearing is scheduled for today, setting the stage for a showdown over the country’s leadership.

Profile: Khan, a former cricket star, was elected in 2018 on a nationalist promise to fight corruption and distance Pakistan from the US, with which it has had a troubled history. If Khan is ousted, many experts say that Pakistan may grow closer to the US and the West.

After older people and nursing home residents, perhaps no group in the US has been hit harder by the coronavirus pandemic than people with diabetes, a chronic disease that hobbles the body’s ability to regulate blood sugar and affects 34 million Americans, or 13 percent of all adults.

Recent studies suggest that 30 percent to 40 percent of all coronavirus deaths in the US have occurred among people with the disease. They are especially vulnerable to severe illness from Covid-19, partly because diabetes impairs the immune system, but also because it is often accompanied by high blood pressure, obesity and other medical conditions.

Diabetes patients hospitalized with Covid spend more time in the ICU, are more likely to be intubated and are less likely to survive compared with those without diabetes, according to several studies, one of which found that 20 percent of hospitalized coronavirus patients with diabetes died within a month of admission.

Quotable: “It’s not that diabetes itself makes Covid inherently worse, but rather uncontrolled diabetes, which is really a proxy for other markers of disadvantage,” said Nadia Islam, a medical sociologist at NYU Langone Health.

Here are the latest maps and updates from the pandemic.

A rising nationalist faction in France has grown its coalition by appealing to Catholic identity and anti-immigrant sentiment — and has reshaped the country’s race for president. During the primaries in the fall, nearly 40 percent of French voters expressed a preference for a candidate promoting far-right ideas.

Is geometry a language that only humans know?

Researchers are exploring whether shapes like squares and rectangles — and our ability to recognize them — are part of what makes our species special, Siobhan Roberts reports for The Times.

In 1996, Stanislas Dehaene, a cognitive neuroscientist with the Collège de France, released the book “The Number Sense: How the Mind Creates Mathematics,” on the evolutionary roots of our mathematical instinct. More recently, he has zeroed in on a related question: What sorts of thoughts, or computations, are unique to the human brain?

Our seemingly innate intuitions about geometry may be part of the answer, he says. For Dr. Dehaene, it is the inclination to imagine — a triangle, the laws of physics, even the foundations of religion — that captures the essence of being human.

A study that compared the ability of humans and baboons to perceive geometric shapes found that humans performed better when the quadrilaterals shown were regular, possessing properties such as parallel sides and right angles. When the baboons were presented with regular polygons, their performance collapsed.

Results such as these set a challenge for artificial intelligence. “I love the progress in AI,” Dr. Dehaene said. “It’s very impressive. But I believe that there is a deep aspect missing, which is symbol processing” — that is, the ability to manipulate symbols and abstract concepts, as the human brain does.

Read more about the limits of nonhuman geometry.