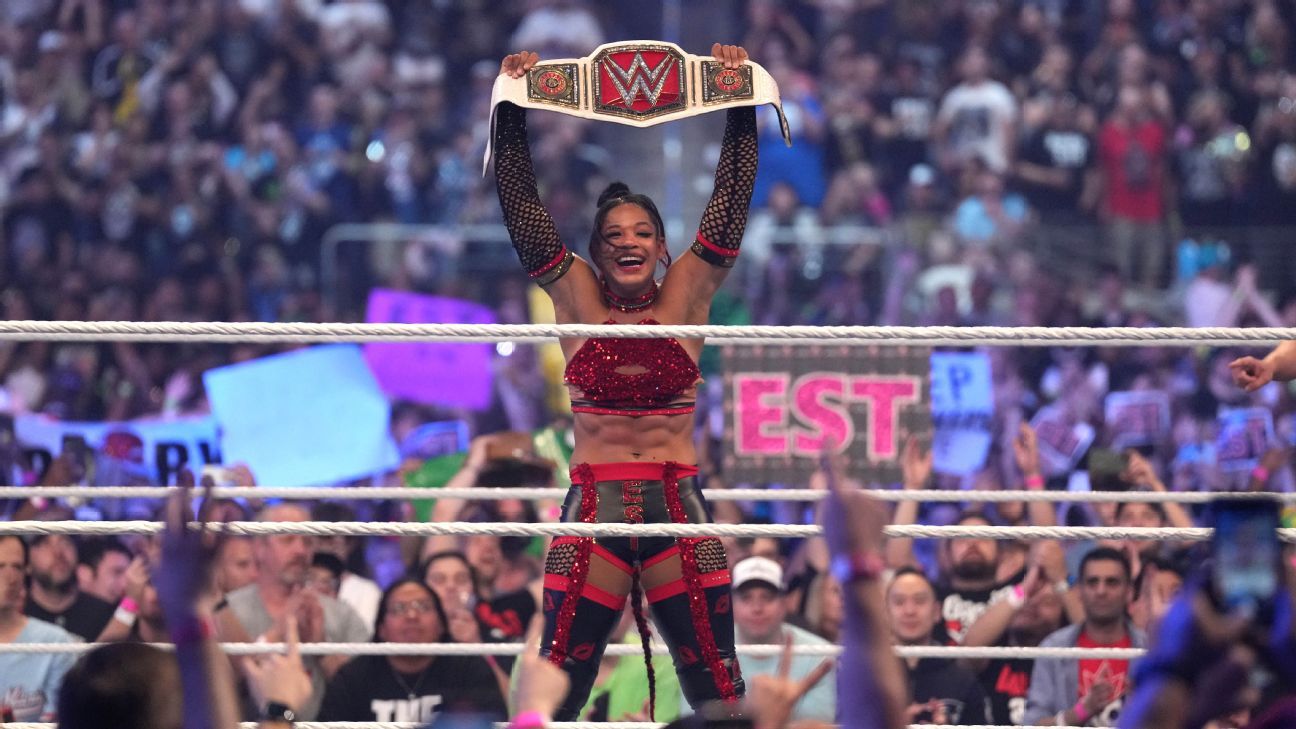 The biggest event in professional wrestling is ready to touch down at AT&T Stadium in Arlington, Texas. WrestleMania 38, a two-night affair at the home of the Dallas Cowboys, will spotlight the superstars of WWE with all of the promotion’s titles on the line. The Saturday festivities include three title matches, the return of an icon and the first match for a social media star.

WWE Raw Women’s champion Becky Lynch and Bianca Belair will face off in a rematch after Belair stunningly dropped her title to Lynch in just 26 seconds at SummerSlam last August. Other standout matches include The Miz teaming up with social media star Logan Paul to take on the father-son duo of Rey and Dominik Mysterio, Edge facing AJ Styles, and Seth Rollins facing an opponent that Mr. McMahon will introduce once Rollins is in the ring.

The other two title fights on the Saturday card: The Usos will look to retain their SmackDown tag team titles against Shinsuke Nakamura and Rick Boogs, and Ronda Rousey will aim for the SmackDown women’s championship, as she chose a match with Charlotte Flair after winning the women’s Royal Rumble in January.

Also, in what is expected to be the main event of Night 1, “Stone Cold” Steve Austin will walk down the ramp for an appearance on the “KO Show,” hosted by Kevin Owens. The assumption is that hands will be thrown, beer will be chugged and someone will be on the wrong end of a stunner.

Haven’t watched WWE in a while? Find out all you need to know about the card from our lapsed fan’s guide, then follow live as we break down every match on the card.

“The American Nightmare” helped give us the dream matchup we didn’t know we needed.

It had been six years since Cody Rhodes stepped into a WWE ring, and his match against Seth Rollins served as a reminder of what two dynamic personalities with technical in-ring excellence can do when paired together.

It felt like Rollins would be set up in a throwaway match, due to the unknown quantity of who he’d face Saturday night, but in being paired with Rhodes, the two put on a match that looked like something out of The Attitude Era of the late ’90s. Less aerial exploits, more counters and bear hugs. Compared with Belair-Lynch, the pacing of Rollins-Rhodes was slowed, but the drama remained high and tense.

To be fair, the pacing might’ve been the thing that gave us the true tension of the contest, as an ironman match broke out between two of the best performers in a generation of professional wrestling. Rollins broke out an inverted suplex from the top rope and linked it with a second slam, only for Rhodes to kick out. Then Rhodes landed a flying DDT from the top rope, only for Rollins to kick out.

The combination of the night went to Rhodes, who linked back-to-back Cross Rhodes on Rollins, and then decided to channel “The American Dream” Dusty Rhodes with multiple jabs and that iconic Bionic Elbow to make his dad proud. A third Cross Rhodes would end Rollins’ night, scoring a debut win for the former three-time AEW TNT champion.

What’s next: It feels like Rhodes is ready for a run with the big dogs, right? Maybe. But pairing a well-seasoned Rhodes with Finn Balor or Ricochet would help continue to raise the profile of all involved. For Rollins, there’s a story to tell with Reigns, depending on how this weekend’s festivities play out.

The drama started early, as the handshake of doom from Lynch that derailed Belair’s championship reign four months prior was offered by The EST to Big Game Becks. Lynch, stunned by the offering, countered with a punch to the face. The action didn’t stop from there.

Lynch stayed on the offensive for much of the match, being the aggressor and quickly stamping out any momentum Belair tried to build at various points. But Belair would not stay down, as his ability to power out of various holds helped keep the match nearly level.

That power always stands out, but her athletic feats hit another level as her 450-degree splash on Lynch left mouths agape. Lynch would not be outdone, as her rolling Thunderkick from the top rope on Belair was equally impressive.

Belair looked doomed late in the match, as Lynch hit her with a Manhandle Slam on the steel steps, leaving her outside the ring and nearly counted out. Belair scrambled back into the ring at the count of 9, with Lynch ready to finish off the challenger. However, Belair summoned the last of her strength, hoisted Lynch up on her shoulders and landed the KOD to dethrone the champion.

The standard has officially been set, as Belair and Lynch arguably put on the best match of 2022 thus far, leaving the rest of Wrestlemania cards of the weekend a high bar to clear.

What’s next: There’s still plenty of meat left on the bone between these two, and if they want to set up more between the two, then let them. Belair is a worthy heir to the throne, but could we see Rhea Ripley step up for a challenge in a display of strength for the belt? For Lynch, she’s earned a Nate Diaz-like status in WWE, where she can earn top billing with or without a belt on the line. She’s that good.

There was one big question coming into the tag-team match between The Mysterios versus The Miz and Logan Paul: We know Logan Paul can fight, but can he wrestle?

Paul represented himself well, flashing athleticism and strength, along with some underhanded tactics worthy of someone performing in front of a crowd not on his side. In fact, the duo from Cleveland displayed an immediate tag-team chemistry while controlling the match for a lengthy period of time.

However, the father-son duo would rally back as the senior Mysterio would eventually get in the ring to save a damaged Dominik and establish heavy offense on The Miz. Rey’s flying Hurricanrana along with an impressive 619 paired with a tornado DDT helped re-establish control for the Mysterios. And then, a game of one-upping each other broke out.

First, Rey’s failed attempt of hitting the Three Amigos was one-upped by Logan Paul hitting the combo move along with the Frog Splash and a shimmy. Then, Dominik countered with a Frog Splash of his own to setup up double 619’s by The Mysterios.

Through all of the madness, The Miz tagged himself in and landed a Skull Crushing Finale on Rey to cash in on the victory.

Then, to one-up himself, The Miz decided to remember the beef he had with Logan from last August and delivered a Skull Crushing Finale to his teammate.

WHAT DID WE JUST WITNESS?!?!?!?!?!?@mikethemiz just gave @LoganPaul a Skull Crushing Finale following their victory at #WrestleMania, pic.twitter.com/8Df7TIqcgJ

What’s next: For a brief moment, the thought of Miz and Paul being a legitimate tag team seemed like a real possibility. And then Miz sent his partner’s face to the canvas. A likely split and future solo success seems like the move here. Especially for Paul, who not only held his own for an extended period, but displayed the charisma needed for real success in WWE.

As for The Mysterios, their place amongst the top tag teams in the company is secure, and they should challenge for the straps again in the near future.

Drew McIntyre has been out for vengeance ever since he was attacked by Happy Corbin and Madcap Moss at WWE Day 1. On Saturday night McIntyre finally got his revenge, although it took a Swanton dive over the top rope and kicking out of an End of Days to get it done.

It’s a bit of a shame that McIntyre and Corbin got pitted against each other this early in the card, along with the stakes being nothing more than their personal feud, because both men were agile and clinical in the ring while putting on a show. Moss, usually interjecting with witty jokes, instead interfered with his teammate, causing him to take heavy damage due to the distraction.

McIntyre, who just recently returned to action after recovering from a neck injury, finally connected with the Claymore on Corbin to earn the victory. During his celebration, Moss tried to butt in, but was thwarted by McIntyre who wielded his massive sword “Angela” and chopped two of the ring ropes in half while missing Moss in the process.

What’s next: McIntyre’s feud with Corbin and Moss should be over now, and he could be in line for a title shot depending on how things shake out between Reigns and Lesnar on Sunday night. For Corbin and Moss, how about a legitimate run at a tag-team title? They’re big, they can move and each can hold their own on the mic. Maybe they’re up next for The Usos?

Fewer tandems could’ve been better choices to serve as the opener of WrestleMania 38 than the rock-and-rolling duo of Shinsuke Nakamura and Rick Boogs, along with high-flying, swaggering seven-time tag-team champions The Usos.

Boogs displayed his versatility both inside and outside the ring with his impressive guitar skills and display of strength by deadlifting Jey Uso to a vertical suplex position. Unfortunately, Boogs succumbed to injury as his right knee buckled — the same knee he feigned injury with a few weeks prior — while attempting to shoulder the load of both Uso brothers in the middle of the ring.

The Usos eventually finished off a now-solo Nakamura with a 1D and earned the pinfall victory.

For Jimmy and Jey, retaining the titles early in the weekend means they can keep their focus toward all things related to The Bloodline and assisting their cousin Roman Reigns in the Sunday main event against Brock Lesnar. For Boogs, a rising star who momentarily shined brightest to start the show, hopefully has a speedy recovery ahead of him.

What’s next: The Usos’ win helps reset the bar for the SmackDown tag team roster post-WrestleMania. Depending on how well The New Day performs Saturday night with Xavier Woods and Kofi Kingston holding it down without Big E, another battle between the two future Hall of Fame tag teams seems like a real possibility. For Nakamura and Boogs, a split and a singles run for both seems likely in their future.

Best Bollywood Actresses Of 2021: From Kriti Sanon To Kiara Advani, Ladies Who Won Our Hearts