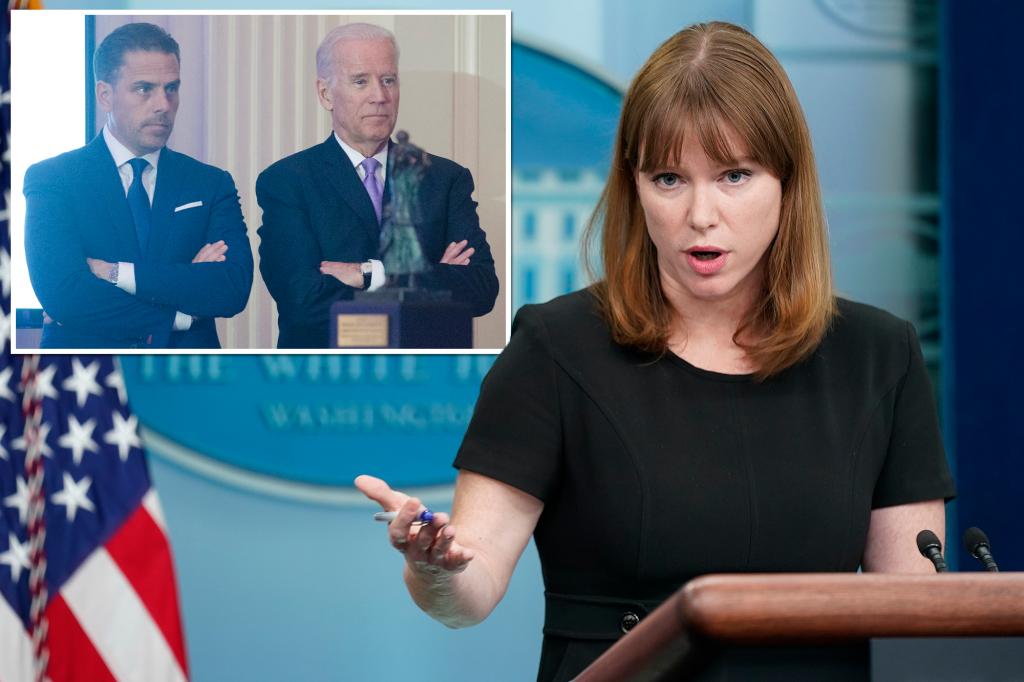 Bedingfield stood by the claims even after they were demonstrated to be untrue as major US newspapers increasingly focus on the first son’s dealings amid reports he may soon face criminal charges — with the Washington Post and New York Times belatedly confirming the authenticity of Hunter Biden emails first reported by The Post in October 2020 ahead of the final presidential debate.

NBC News journalist Kristen Welker, who moderated the final debate, pressed Bedingfield Thursday about the accuracy of Biden’s claims that “nothing was unethical” about his son’s business dealings in China and Ukraine and that he “has not made money” in China.

“During the last presidential debate, [Joe] Biden was asked if there’s anything inappropriate or unethical about his son’s relationships, business dealings in China and/or Ukraine. The president said ‘nothing was unethical.’ He went on to say, ‘My son has not made money in terms of this thing about, talking about China.’ Does the White House stand by that comment?” Welker asked Bedingfield at the daily White House briefing.

“We absolutely stand by the president’s comment,” Bedingfield said. “And I would point you to the reporting on this, which referenced statements that we made at the time, that we gave to the Washington Post, who worked on this story. But as you know, I don’t speak for Hunter Biden so there’s not more I can say on that.”

White House spokespeople did not immediately respond to The Post’s request for comment on the particular 2020 statement referenced by Bedingfield, but she may have been referring to an article this week in which the Washington Post reported that the first son and his uncle Jim Biden received $4.8 million from CEFC China Energy Co, debunking the president’s debate-stage claims.

That article reported: “The White House declined to respond on the record but pointed to previous statements that Joe Biden ‘has never even considered being involved in business with his family, nor in any overseas business whatsoever.'”

One of the emails reported by The Post ahead of the final 2020 debate showed that Hunter Biden and Jim Biden were brokering a deal with CEFC and appeared to cut in Joe Biden.

The email described “10 [percent] held by H for the big guy.” Former Hunter Biden business partner Tony Bobulinski accused Joe Biden of being the “big guy” at a press conference ahead of the last presidential debate.

Portnoy, who is president of the White House Correspondents’ Association, asked if Joe Biden was preparing to pardon family members. Bedingfield said “that’s not a hypothetical I’m going to entertain.” She declined to answer O’Keefe’s query about whether Biden is reading recent reports on his son’s possible indictment for tax fraud, money laundering and foreign lobbying crimes.

In another Chinese entanglement, Hunter Biden held until at least November a stake in the investment firm BHR Partners, which was registered 12 days after Hunter joined then-Vice President Biden aboard Air Force Two for a 2013 trip to Beijing. The firm is controlled by Chinese state-owned entities and facilitated the 2016 sale of a Congolese cobalt mine from a US company to China Molybdenum for $3.8 billion. Cobalt is a component in electric car batteries.

Hunter Biden’s attorney Chris Clark said in November — less than a week after President Biden’s 3 1/2 hour virtual summit with Chinese President Xi Jinping — that his client had finally divested his 10 percent stake in BHR Partners, but offered no further details.

White House press secretary Jen Psaki refused to say at a briefing this month if Hunter Biden actually divested his stake in that firm — after previously declining to commit to basic transparency about the supposed buyer’s identity, the amount of money involved and the timing of the transaction .

Joe Biden said in 2020 that members of his family would not hold any business role that conflicts with “or appears to be in conflict” with his job as president.

Hunter Biden was paid a reported $1 million per year to serve on the board of Ukrainian gas company Burisma, founded by corrupt pro-Russia oligarch Mykola Zlochevsky.

Joe Biden claimed in 2019 that he’d “never spoken” with his son about “his overseas business dealings,” but that statement was contradicted when The Post reported in October 2020 that Burisma executive Vadym Pozharskyi emailed Hunter in 2015 to thank him for the opportunity to meet his father .

The Biden campaign at the time vaguely denied that the meeting occurred, saying, “[W]e have reviewed Joe Biden’s official schedules from the time and no meeting, as alleged by the New York Post, ever took place.” Twitter banned sharing of The Post’s reporting and locked The Post out of its accounts, and Facebook squelched circulation of the story, amid false claims that it could be based on Russian disinformation.

Photos and emails later reported by The Post indicate Joe Biden attended a 2015 DC dinner at the ritzy Cafe Milano with a group of his son’s associates — including Pozharskyi, a trio of Kazakhs and Russian billionaire Yelena Baturina and her husband, ex-Moscow mayor Yury Luzhkov.

Psaki told The Post this month that she had “no confirmation” that a firm linked to first son got $3.5 million from Baturina, as alleged in a 2020 Senate report. She refused to say how Biden is navigating conflicts of interest in imposing sanctions on Russian oligarchs. Baturina is the richest woman in Russia, but unlike many other Russian billionaires, she has not faced US sanctions as NATO seeks to penalize Russia’s invasion of Ukraine.