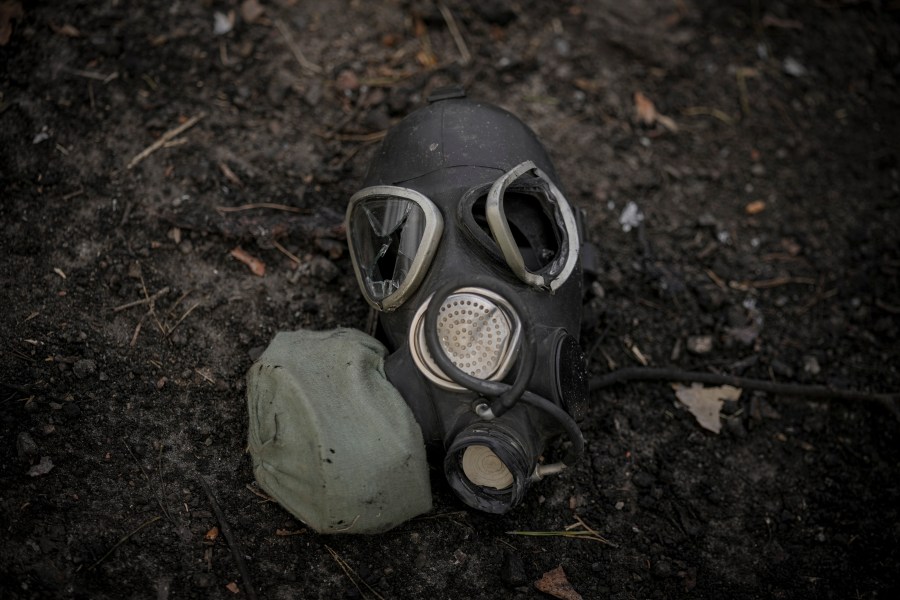 WASHINGTON (AP) — Russia’s assault on Ukraine and its veiled threats of using nuclear arms have policymakers, past and present, thinking the unthinkable: How should the West respond to a Russian battlefield explosion of a nuclear bomb?

The default US policy answer, say some architects of the post-Cold War nuclear order, is with discipline and restraint. That could entail stepping up sanctions and isolation for Russian President Vladimir Putin, said Rose Gottemoeller, deputy secretary-general of NATO from 2016 to 2019.

But no one can count on calm minds to prevail in such a moment, and real life seldom goes to plan. World leaders would be angry, affronted, fearful. Miscommunication and confusion could be rife. Hackers could add to the chaos. Demands would be great for tough retaliation — the kind that can be done with nuclear-loaded missiles capable of moving faster than the speed of sound.

When military and civilian officials and experts have war-gamed Russian-US nuclear tensions in the past, the tabletop exercises sometimes end with nuclear missiles arcing across continents and oceans, striking the capitals of Europe and North America, killing millions within hours, said Olga Oliker, program director for Europe and Central Asia at the International Crisis Group.

It’s a scenario officials hope to avoid, even if Russia targets Ukraine with a nuclear bomb.

Gottemoeller, a chief US nuclear negotiator with Russia for the Obama administration, said that the outlines that President Joe Biden has provided so far of his nuclear policy stick with those of past administrations in using atomic weapons only in “extreme circumstances.”

“And a single Russian nuclear use demonstration strike, or — as horrific as it would be — a nuclear use in Ukraine, I do not think would rise to that level” of demanding a US nuclear response, said Gottemoeller, now a lecturer at Stanford University.

For former Sen. Sam Nunn, a Georgia Democrat who over nearly a quarter-century in Congress helped shape global nuclear policy, the option of Western nuclear use has to remain on the table.

“That’s what the doctrine of mutual assured destruction has been about for a long, long time,” said Nunn, now strategic adviser to the Nuclear Threat Initiative security organization, which he co-founded.

For US officials and world leaders, discussions of how to respond to a limited nuclear attack are no longer theoretical. In the first hours and days of Russia’s invasion, Putin referenced Russia’s nuclear arsenal. He warned Western countries to stay out of the conflict, saying he was putting his nuclear forces on heightened alert.

Any country that interfered with Russia’s invasion would face consequences “such as you have never seen, in your entire history,” Putin declared.

How to respond to any use by Russia of chemical, biological or nuclear weapons was among the issues discussed by Biden and other Western leaders when they met in Europe in late March. Three NATO members — the United States, Britain and France — have nuclear weapons.

One overarching concern is that by casting some nuclear weapons as tactical weapons to be used in battle, Russia could break the nearly eight-decade global taboo against using a nuclear weapon against another country. Even comparatively small tactical nuclear weapons approach the strength of the atomic bomb the United States dropped on Hiroshima, Japan, in World War II.

Gottemoeller and Nunn praise Biden’s restraint in the face of Putin’s implicit nuclear warnings at the outset of the war. Biden made no known move to raise the US nuclear alert status. The US also postponed a routine Minuteman III test launch last month to avoid escalating tensions.

But in the short term and long, the world appears more at risk of a nuclear conflict as a result of Putin’s bungled invasion and nuclear threats, according to arms control experts and negotiators.

The weaknesses that Russia’s invasion exposed in its conventional military forces may leave Putin feeling even more compelled in the future to threaten nuclear use as his best weapon against the far-stronger United States and NATO.

While Gottemoeller argued that Ukraine’s surrendering of its Soviet nuclear arsenal in 1994 opened the door for three decades of international integration and growth, she said some governments may take a different lesson from nuclear Russia’s invasion of non-nuclear Ukraine — that they need nuclear bombs as a matter of survival.

Jeffrey Lewis, an arms control expert and professor at the Middlebury Institute, said the nuclear danger is going up.

“And we can tell which pathways would cause that risk to go up further. And certainly direct conflict with Russia from forces based in NATO countries is one pathway to a nuclear war,” Lewis said.

Gottemoeller took heart in Putin grumbling publicly late last month about “cancel culture.” That suggested he was vulnerable to world condemnation over his Ukraine invasion, and worse to come if he broke the post-World War II taboo on nuclear attack, she said.

Detonating a nuclear bomb in a country Putin sought dominion over, one next to his own, wouldn’t be rational, Nunn said. But he said neither was Putin’s announcement of heightened nuclear alert,.

But the risk of intentional nuclear escalation now is high enough to make a cease-fire in Ukraine crucial, Nunn said. The modern threat of cyberattacks adds to the risk of a mistaken launch. And it’s not clear how vulnerable US and, especially, Russian systems are to such hacking attempts, he said.

Putin “has been very reckless in his saber rattling with nuclear weapons,” Nunn said. “And that I think has made everything more dangerous, including a blunder.”