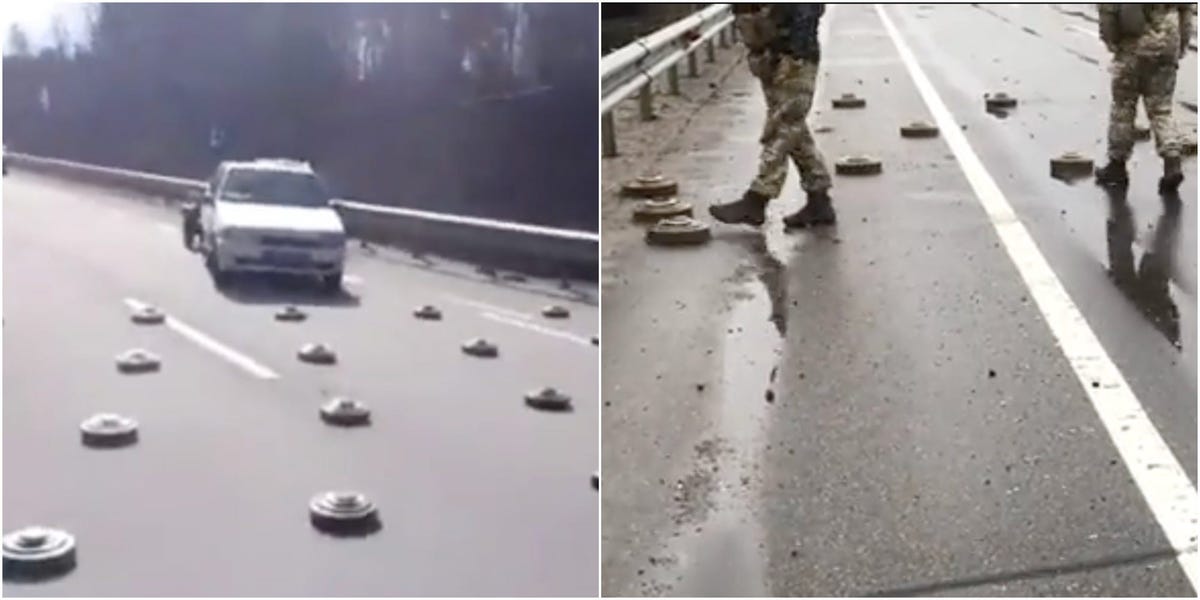 A video that has gone viral on social media appears to show Ukrainian drivers maneuvering their cars through a trap of mines laid out on a highway near Kyiv by Russian forces.

Three cars safely negotiate the potential death trap in the video, and one particularly fearless driver gets across towing a trailer.

This video has been verified to Insider by Human Rights Watch, which stated that anti-vehicle mines are shown in the video.

A second video showed Ukrainian soldiers later casually sweeping the mines to the side of the road with their boots.

Illia Ponomarenko, the defense reporter with The Kyiv Independent, joked on Twitter, “Yes, the Ukrainian military are just kicking anti-tank landmines. It’s called the Ukrainian curling on the Warsaw Highway close to Kyiv.”

Designed to blow up vehicles, the International Committee of the Red Cross state that the “anti-tank mines fusing mechanism requires a pressure of about 100-300 kg (220 – 661 pounds) to activate it.”

According to the EPA, the average weight for a regular car is 4,156 pounds.

The UN states that anti-vehicle mines “restrict the movement of people and humanitarian aid, make land unsuitable for cultivation, and deny citizens access to water, food, care, and trade” and cause “many casualties, often civilian around the world. ”

Russia used landmines to line an evacuation route out of the devastated Ukrainian city of Mariupol.

In his nightly video address, President Zelenskyy warned that Russia is “mining homes, mining equipment, even the bodies of people who were killed,” AP reports, and warned of the dangers of tripwires as Saturday sees another attempt to evacuate citizens of Mariupol.

While many mines are banned due to the 1997 UN Mine Ban Treaty — which “prohibits the use, stockpiling, production, and transfer of anti-personnel mines” — he said anti-vehicle mines were excluded.

Russia and the US — did not agree to the 1997 international Mine Ban Treaty, but Ukraine signed the treaty in 1999.

Ukraine has “not been using anti-personnel mines because they are part of this ban treaty,” he said.

Russia has been using anti-personnel mines in Ukraine.

“We’re not shocked. I mean, we’ve been waiting since day one for Russia to potentially use these weapons based on what they’ve done in their other conflicts in recent years,” Goose told Insider.