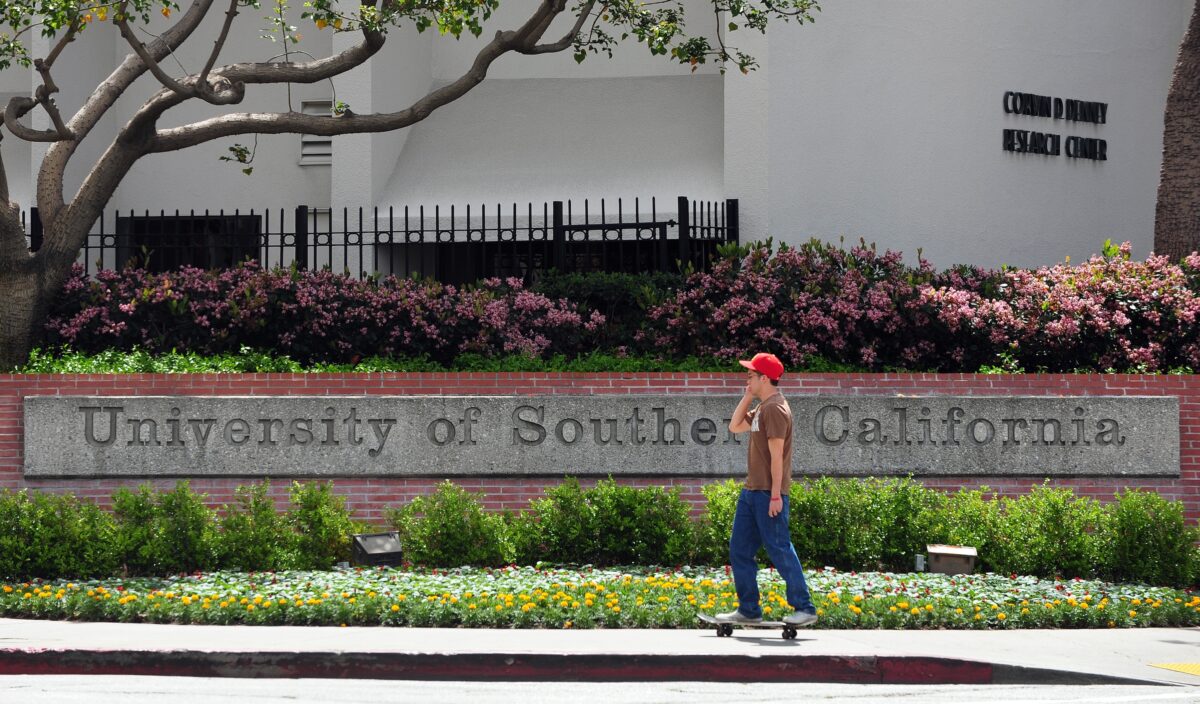 LOS ANGELES — University of Southern California (USC) obtained on April 8 a court order banning two men from campus as they have allegedly barged into classrooms during live lectures and created disturbances they record for YouTube videos.

Los Angeles Superior Court Judge James C. Chalfant issued a temporary restraining order against Ernest Kanevsky and Yuguo Bai, barring them from campus as well as any other university-owned properties in Los Angeles County. Kanevsky and Bai did not appear in court on April 8 and neither could be immediately reached for comment.

The judge also scheduled a hearing on April 28 on whether a preliminary injunction should be issued against the pair.

USC attorneys stated their reason for seeking the order in their court papers filed on April 7.

“Simply put, there is no public benefit to terrorizing students to the point where they are running out of lecture halls for fear of their lives through the perpetration of prank classroom takeovers in order to garner a handful of likes on YouTube,” USC lawyers state in their court papers urging a Los Angeles Superior Court judge to issue a temporary restraining order against the pair during a hearing scheduled on April 8.

USC will continue to experience a loss in goodwill and confidence within its community and among its students and faculty if the men are allowed to continue their “unauthorized assault on [USC’s] classrooms through the continued perpetration of classroom takeover videos, ”the USC court papers state.

The university’s lawsuit was filed on April 6 and alleges both private and public nuisance. The university also seeks unspecified damages and attorneys’ fees.

“This action arises due to dangerous and reckless conduct by [Kanevsky and Bai] targeting [USC’s] campus, students and faculty through the perpetration of panic-inducing classroom takeovers inside [USC’s] lecture halls, ”the suit states.

The stunts are suggested to YouTube followers of the pair as a dare with the intent of generating disruption and chaos leading to an increased social media presence for themselves, the suit alleges.

Beginning in 2021, Kanevsky and Bai, who do not attend USC, have at least three times barged into live lectures inside Mark Taper Hall and recorded the audio and video of “scared and disturbed faculty and students,” the suit states.

Each incident has caused terror and disruption among USC’s students and faculty, the suit alleges.

The actions of Kanevsky and Bai have disrupted the learning environment by provoking extreme fear and anxiety just as USC and other universities are trying to safely return students and faculty to an in-person learning environment, according to the suit.

After a takeover of a lecture involving the Holocaust, USC “observed a drastic drop in student attendance the next time the class was scheduled to meet in person as [USC’s] students were simply too scared to return to the classroom, ”the new USC court papers state.

Patrick Prince, USC’s chief threat assessment officer, submitted a sworn declaration in support of the issuance of a temporary restraining order against Kanevsky and Bai.

“Given the tragic recurrence of campus violence throughout the country, we are a nation on guard against the very type of mayhem that is an objectively reasonable response to the defendants’ outrageous, selfish, reckless and dangerous actions,” Prince said.