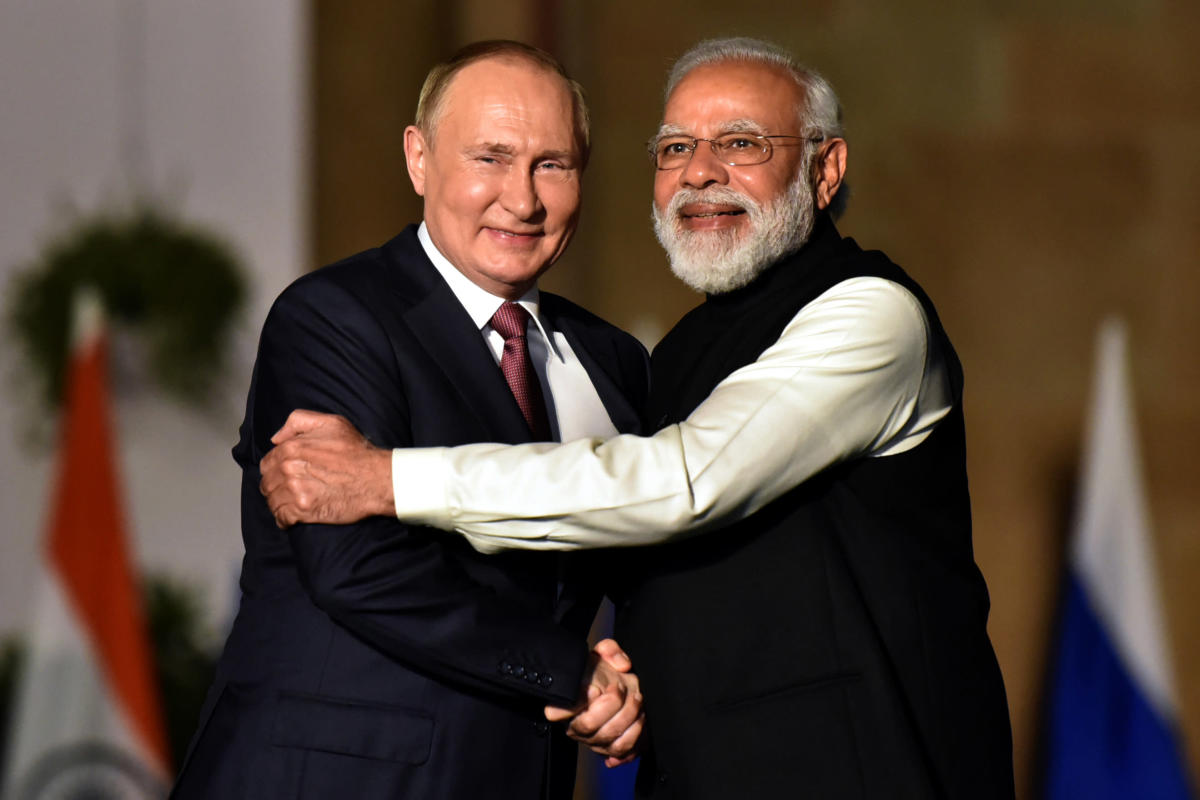 A flurry of visits by Russian and Western diplomats is unlikely to change India’s neutral stance on the war in Ukraine, experts say, particularly since the war has the support of a public being bombarded by media coverage that blames the US for the conflict.

While US and British officials in New Delhi this week pressured India to condemn Russia’s actions in Ukraine, Russian Foreign Minister Sergey Lavrov praised the government for not taking a “one-sided view.”

“We appreciate that India is taking this situation in the entirety of facts,” Lavrov said Friday after meeting with his counterpart, Subrahmanyam Jaishankar, in the Indian capital.

Lavrod also said India and Russia would use a rupee-ruble mechanism so they could continue their trade in oil and other goods despite Western sanctions against US-dollar transactions with Moscow.

“We will be ready to supply India with any goods which India wants to buy,” he said.

A day earlier, a US official said that while Washington is not opposed to India buying Russian oil, which is being steeply discounted after the US, Britain and other countries declared embargoes, it does not want to see a “rapid acceleration” in such imports .

“There are consequences to countries that actively attempt to circumvent or backfill these sanctions,” the official, deputy national security adviser Dalip Singh, told reporters in New Delhi.

British Foreign Secretary Liz Truss, who was also in New Delhi on Thursday, said that Britain would not dictate to India, the world’s largest democracy, on its actions but stressed the need for “like-minded nations to work together.”

Jaishankar, sitting next to Truss at a policy forum in New Delhi, argued that the European Union was still buying Russian oil and that with prices soaring, it was “natural” for countries to seek out the best possible deals.

Since the invasion on Feb. 24, India has bought at least 13 million barrels of Russian oil, according to Reuters, almost as much as it bought in all of 2021.

“India will buy that because it needs that oil for India’s progress,” said Arun Sahgal, senior fellow for strategic and regional security at the Delhi Policy Group, an independent think tank.

In a country where every increase in gas prices sets off protests, Russia’s cheaper oil has been met with relief and greater public support for Moscow in return.

“Russia is the oldest ally with India for so long, and it has been pushed to the corner by the Western world,” Renuka Jain, an accountant based in Delhi, said through a messaging app.

She called the oil purchases a “brilliant decision.”

“The US is more concerned about what happens if the oil is bought in another currency and the dollar loses its sheen,” she said.

Though India has grown closer to the US in recent years, it has long related on Russia for defense equipment, fighter jets and support at international forums as it clashes with neighbors like China, Pakistan and Bangladesh.

“We have been saved only by the Russians — whether it is the Kashmir issue, the Bangladesh war, national security issues, industry, economy — while the United States was on the other side of the camp,” Phunchok Stobdan, a foreign policy expert and former Indian ambassador to Kyrgyzstan, told NBC News by phone from the northern Indian city of Leh.

That pro-Russian sentiment is reflected in the streets, on Twitter and on television sets across the country. While much of the world rallies in support of Ukraine and against Russian President Vladimir Putin, right-wing groups in India are marching with banners bearing slogans like “Long Live India-Russia Friendship.”

“The sad part of the whole story is that they watch Netflix at night, and Apple TV, and curse the United States the next day,” said Sahgal.

India’s mainstream media, which caters to a right-wing Hindu majority, has accused the US of hypocrisy in the Ukraine conflict and said the West played a major role in instigating it by supporting the eastward expansion of NATO, the US-led military alliance established during the Cold War to counter the Soviet Union.

“I don’t believe in the concept of Americans declaring themselves innocent, because the Americans are the ones who have a profound history of using the worst chemical weapons on the most innocent people,” top-rated news anchor Arnab Goswami said in a monologue on March 11, citing the US atomic bombing of Hiroshima at the end of World War II among other examples.

Another star news anchor, Rahul Shivshankar, has hosted debates with titles like “Is the War Planned or Provoked?” He said India has the right to take positions different from those in the West, calling its neutral stance on Ukraine “judicious.”

Like China, India has called for a peaceful resolution to the conflict but abstained from voting on UN resolutions critical of Russia’s actions. That gives confidence to smaller countries in Asia and elsewhere that are also trying to balance their relations with world powers, Stobdan said.

“Putin is not going to stop his work just because India votes against or in favor of Russia. He will do whatever he wants to do,” he said. “India won’t matter. But what India does makes a difference in the international landscape.”