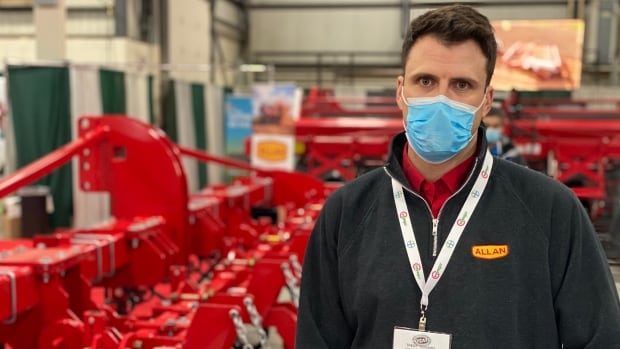 “Ominous” is the word that Trent Cousins ​​uses to describe the mood in the potato industry these days on Prince Edward Island.

He’s co-owner of Allan Equipment Manufacturing in Covehead, PEI, and his company has large, expensive equipment on display at this year’s International Potato Technology Expo in Charlottetown.

The event has been held every two years for the last two decades, and usually there would be sales made at the event.

This year, the uncertainty caused by the closure of the US border last fall, and millions of dollars of lost sales that followed, are weighing on the minds of many.

“There is a bit of an ominous feel in the industry,” Cousins ​​said.

“Not only with the border closure, and all of the science and politics around that, but also the volatility in the world markets.”

“Just ordering something that used to be simple, that was a week or two away, we’ve got to order components that are, some of them, 18 months away,” Cousins ​​said.

“If we don’t already have them, then we’re not going to have them before this harvest.”

Cousins ​​said the company had orders canceled, or scaled back, last fall when the US border closure was announced.

“The farmers looked like they were going to have a really good year, and were going to be able to reinvest, and there was definitely quite a shift when the border closed,” Cousins ​​said.

“We’re going to see a lot of people just fixing up what they have, and making it last another year. And we can’t blame them, they’ve got to look after themselves.”

“The damage for this year is done, and our concern is in the years to come, that the generation that was kind of just coming up, this was quite a kick in the teeth for them.

“What they thought was a certainty for however many years, that they could get a good return, and make a good living, all of a sudden it’s very uncertain.”

Cousins ​​said the company has tried to diversify to manufacture equipment for other crops, including blueberries, and, so far, has not had to lay off any staff.

The PEI Bag Company, based in Central Bedeque is a regular exhibitor at the potato expo, and general manager Thane Smallwood said it has also been a challenging last four months for them.

“For our business, it’s been a significant impact. Back when it started, most of the potatoes that would go across the US border would be packed in poly bags that we would manufacture, and also in paper master bags and in totes,” Smallwood said.

“Certainly the US ban impacted us absolutely immediately, and continues to this day, until we see that first load of potatoes going across the US border.”

Smallwood said that other business, in smaller paper bags, allowed them to keep staff busy.

“That sort of picked up a little bit, offset some of the other workforce issues. And at the end of the day, we’re actually continuing to hire people over the last number of months,” Smallwood said.

It’s really difficult for a business that is a support to the potato industry to plan for the next six months, 12 months​​.— Thane Smallwood, PEI Bag Company

Smallwood said one of the biggest hurdles is the ability to plan for the season ahead.

“It’s really difficult for a business that is a support to the potato industry to plan for the next six months, 12 months. And that’s the challenge,” Smallwood said.

“All of the supplier costs — doesn’t matter whether it’s paper, glue, ink — all of those things are rising, and I’m hoping that that’s going to settle out in the next six months as well.”

Show manager Shawn Murphy said the number of exhibitors was down slightly, but that was mainly international businesses who couldn’t make it because of travel rules related to the pandemic.

Murphy said one of the biggest challenges was getting equipment to have on display at this year’s expo.

“As soon as they get equipment, it’s usually sold right away,” Murphy said. “Some exhibitors had to go back to their clients and say, ‘Can we borrow the equipment we just sold to you?'”

Murphy said his company will be watching to see what happens in the industry on PEI, between now and when the show happens again, in two years time.

“Certainly with the great crop they had last year, we were hoping that they would have a great 2022,” Murphy said.

“There’s certainly some challenges right now, but you know what? Every industry rebounds. They’re going to work through the challenges that they have. And I think technology might be one of the solutions that will help them out.”