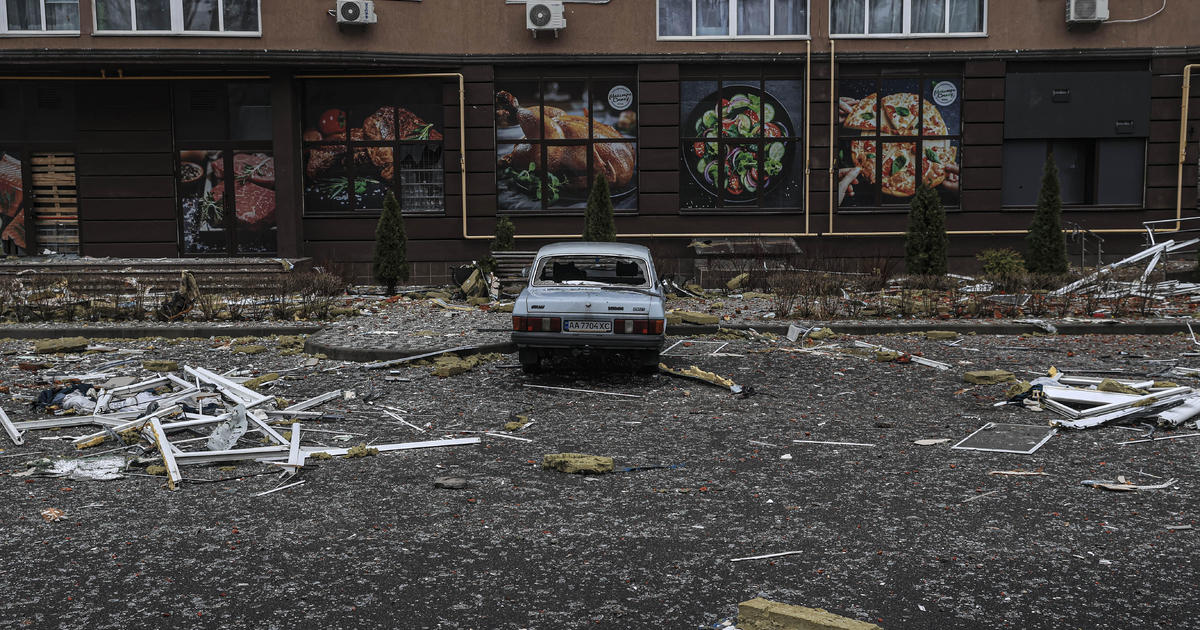 Ukrainian President Volodymyr Zelenskyy warned his people early Saturday that retreating Russian forces were creating “a complete disaster” outside the capital, Kyiv, as they leave mines across “the whole territory,” even around homes and corpses.

“They are mining homes, mining equipment, even the bodies of people who were killed,” Zelenskyy said in his nightly video address to the nation. “There are a lot of trip wires, a lot of other dangers.”

He urged residents to wait to resume their normal lives until they are assured that the mines have been cleared and the danger of shelling has passed.

Zelenskyy issued the warning as the humanitarian crisis in the encircled port city of Mariupol deepened, with Russian forces blocking evacuation operations for the second day in a row, and the Kremlin accused the Ukrainians of launching a helicopter attack on a fuel depot on Russian soil.

Ukraine denied responsibility for the fiery blast, but if Moscow’s claim is confirmed, it would be the war’s first known attack in which Ukrainian aircraft penetrated Russian airspace.

“Certainly, this is not something that can be perceived as creating comfortable conditions for the continuation of the talks,” Kremlin Dmitry Peskov said, five weeks after Moscow began sending upwards of 150,000 of its own troops across Ukraine’s border.

Russia continued withdrawing some of its ground forces from areas around Kyiv after saying earlier this week it would reduce military activity near the Ukrainian capital and the northern city of Chernihiv.

The mayor of a town just outside of Kyiv called Bucha told AFP reporters on Saturday that the Ukrainian army retook control of the commuter town from the Russians. Mayor Anatoly Fedoruk said corpses fill the streets of the heavily destroyed town, and the dead are being buried in mass graves.

“In Bucha, we have already buried 280 people in mass graves,” Fedoruk told AFP by phone.

In Kyiv, there is relief that Ukraine has managed to halt Russia’s advance on the capital for now – but they are not letting down their guard. Many there are convinced it could be short-lived, CBS News’ Debora Patta reports.

From soldiers like Sergei defending Kyiv, there’s only contempt for Russia’s claim it dramatically reduced operations near the capital. Sergei said he doesn’t believe Russia and that maybe it’s just a retreat in preparation for a stronger attack.

Sergei last picked up a gun 25 years ago during his description. In a few weeks, his son turns 18 and will join him in the fight — Russian brutality serving only to strengthen their resolve.

Ukraine and its allies warned that the Kremlin is not de-escalating to promote trust at the bargaining table, as it claimed, but instead resupplying and shifting its troops to the country’s east. Those movements appear to be preparation for an intensified assault on the mostly Russian-speaking Donbas region in the country’s east, which includes the city of Mariupol.

There are still more than 150,000 residents left inside that city — unable or unwilling to leave as Russian tanks continue to pound what’s left of it. On Saturday, another Red Cross convoy will attempt to evacuate more residents from the city, which has been under siege for five weeks.