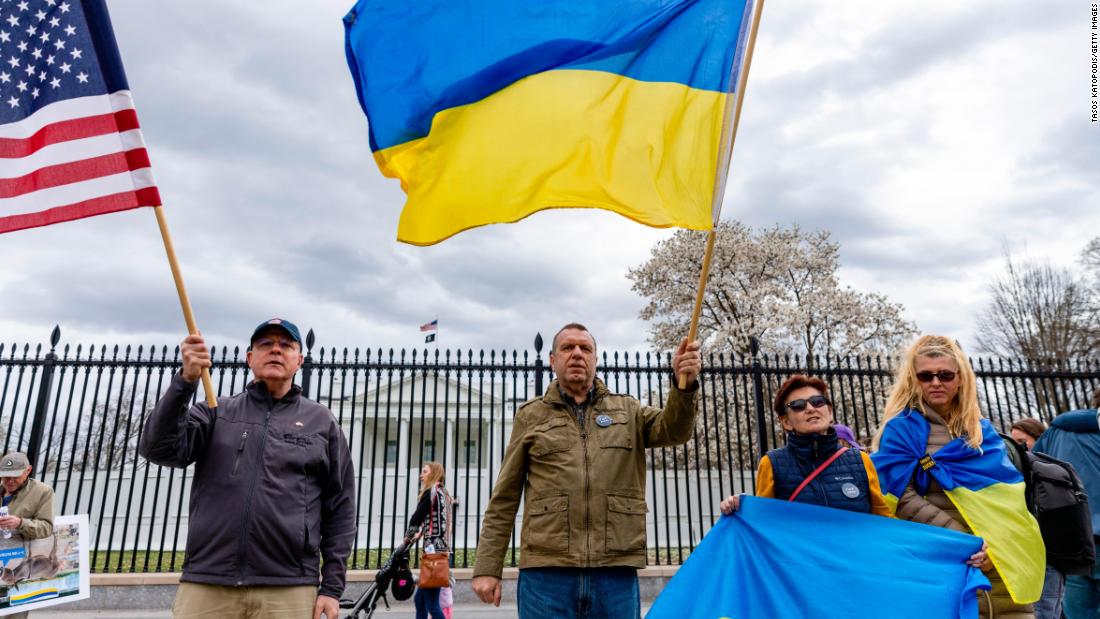 “At this particular moment, these peace negotiations are far from real negotiations,” Ivanna Klympush-Tsintsadze, who chairs Ukraine’s Parliamentary Committee on Integration of Ukraine to the European Union, told a small group of reporters at a roundtable hosted by the German Marshall Fund think tank.

“Definitely, I think that Putin is using this as a smokescreen, buying time to regroup … and sending false, lying messages to the whole world,” she said.

“We feel these are not real peace talks at this point,” said MP Anastasia Radina, who heads the parliament’s Committee on Anti-Corruption Policy. “We feel that what Russia is doing is trying to save face. They say they are withdrawing troops from Kiev region. That’s not true for one simple reason. They’re not withdrawing. … They were kicked (out).”

Radina said there is only “one way out of the war, and that is for Ukraine to win.”

Their remarks came one day after the Russian Ministry of Defense said that it had decided to “drastically reduce hostilities” around Kyiv and Chernihiv. US officials, including President Joe Biden, remain skeptical of the announcement.

“We’ll see,” Biden said on Tuesday when asked about Russia’s claims. “I don’t read anything into it until I see what their actions are. We’ll see if they follow through on what they’re suggesting.”

The all-female Ukrainian delegation — men between the ages of 18-60 are not allowed to leave Ukraine amid the war — traveled to Washington this week primarily, they say, to ask American lawmakers and administration officials for more military support, which they said is still falling far short of Ukraine’s needs.

Radina reiterated that Ukraine needs fighter jets, “because this is how we can actually stop bombings. … And as of now this is the issue on the table, and while it is on the table, people will continue suffering.”

“Our ‘humanitarian aid’ is weapons,” said MP Maria Ionova. “Because to minimize these victims and casualties, we have to defend our air. Freedom has to be armed. And that is why our main message here is please, help us to defend our future and the future of the democratic world.”

‘Neutrality is not an option for Ukraine’

Ukrainian President Volodymyr Zelensky has signaled that Ukraine might be willing to forgo NATO membership and commit to neutrality if the West provides Ukraine with solid security guarantees. But such a move would have to be put to a referendum — and Klympush-Tsintsadze indicated that anything short of NATO membership should be rejected.

“Neutrality is not an option for Ukraine,” she said. “I want everybody to understand we were non-aligned. We were a non-bloc country back in 2014. It did not preclude Putin from attacking us at that point. And it did not preclude him from grabbing part of our territory. So it will not stop him. Even if we write on all the papers, all over, that we are neutral. He just is not interested in us existing as such.”

Radina echoed those comments, saying that “absolute neutrality is not an option for Ukraine,” because Russia will always border the country and aim to “obliterate” Ukraine from the map.

“So yes, we are looking for workable security guarantees and not just another Budapest Memorandum,” she said.

The UK, US, and Russia signed that memorandum — which was supposed to prohibit those countries from using military force against Ukraine, Belarus and Kazakhstan — in exchange for them giving up their nuclear weapons.

Zelensky told the Munich Security Conference last month that Ukraine “has tried three times” since 2014, when Russia annexed Crimea, “to convene consultations with the guarantor states of the Budapest Memorandum. Three times without success.”