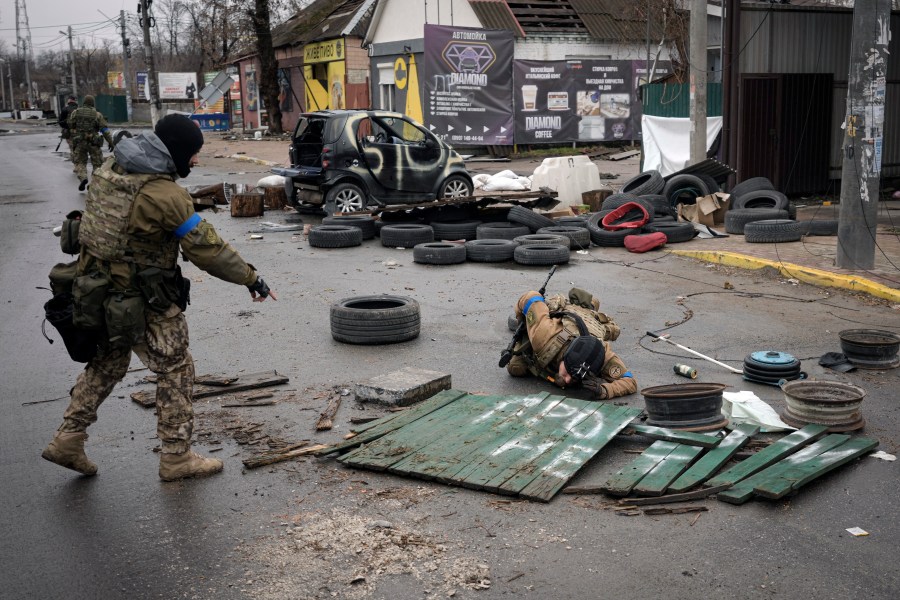 With Mariupol squarely in Russia’s crosshairs, Ukraine insists it has gained a leg up elsewhere in the country, leading to troops retaking territory north of the capital of Kyiv as Russian forces departed.

“Ukraine has gained invaluable time, time that is allowing us to foil the enemy’s tactics and weaken its capabilities,” President Volodymyr Zelenskyy said late Saturday.

Inside Mariupol, though, surrounded by Russian forces for more than a month and brutalized by some of the war’s worst attacks, conditions remain dire and prospects for escape uncertain.

About 100,000 people are believed to remain in the Sea of ​​Azov city, less than a quarter of its prewar population of 430,000, and dire shortages of water, food, fuel and medicine persist.

Many still in Mariupol await fulfillment of promises to help them reach safety. Among those trying to get residents out was the International Committee of the Red Cross, which still hadn’t reached the city on Saturday, a day after local authorities said it had been blocked by Russian forces.

Some residents escaped on their own, including Tamila Mazurenko, who reached Zaporizhzhia, a city still under Ukrainian control that has served as a hub for other evacuations.

“I have only one question: Why?” she said of her city’s order. “Our normal life was destroyed. And we lost everything. I don’t have any job, I can’t find my son.”

Mariupol is in the mostly Russian-speaking Donbas region, where Moscow-backed separatists have fought Ukrainian troops for eight years. Its capture would create an unbroken land corridor from Russia to Crimea, which Moscow seized from Ukraine in 2014.

As Ukrainian troops moved cautiously to retake territory north of Kyiv, the country and its Western allies said Russia is building strength in eastern Ukraine. Where Russian troops recede, Ukraine said it would continue its attacks, shelling and targeting them as they pull out.

“Peace will not be the result of any decisions the enemy makes somewhere in Moscow. There is no need to entertain empty hopes that they will simply leave our land. We can only have peace by fighting,” Zelenskyy said.

Though the geography of the battlefield morphed, little changed for many Ukrainians more than five weeks into a war that has sent more than 4 million people fleeing the country as refugees.

Zelenskyy alleged that as Russian troops have shifted, they’ve left mines around homes, abandoned equipment and even the bodies of the dead. Those claims could not be independently verified, but Ukrainian troops were seen heading the warning.

In Bucha, northwest of Kyiv, Associated Press journalists watched as Ukrainian soldiers, backed by a column of tanks and other armored vehicles, used cables to drag bodies off of a street from a distance for fear they may have been booby-trapped. Locals said the dead — AP counted at least six — were civilians killed without provocation by departing Russian soldiers.

In towns and cities surrounding Kyiv, signs of fierce fighting were everywhere in the wake of the Russian redeployment. Destroyed armored vehicles from both armies lay in streets and fields along with scattered military gear.

Ukrainian troops were stationed at the entrance to Antonov Airport in the suburb of Hostomel, demonstrating control of the runway that Russia tried to storm in the first days of the war.

Inside the compound, the Mriya, one of the biggest planes ever built, lay wrecked underneath a hangar pockmarked with holes from the February attack.

“The Russians couldn’t make one like it so they destroyed it,” said Oleksandr Merkushev, mayor of nearby Irpin.

The head of Ukraine’s delegation in talks with Russia said Moscow’s negotiators informally agreed to most of a draft proposal discussed during face-to-face talks in Istanbul this week, but no written confirmation has been provided. However, Davyd Arakhamia said on Ukrainian TV that he hopes that draft is developed enough so that the two countries’ presidents can meet to discuss it.

Even as flickers of hope emerged for Ukraine in some places, Zelenskyy said he expects towns where Russian forces depart to endure missile and rocket strikes from afar and for the battle in the east to be intense. In his evening address Saturday, he called for his people to do whatever they can to ensure the country’s survival, even acts as simple as showing each other kindness.

“When a nation is defending itself in a war of annihilation, when it is a question of life or death of millions, there are no unimportant things. … And everyone can contribute to a victory for all,” the president said. “Some with weapons in their hands. Some by working. And some with a warm word and help at the right moment. Do everything you can so we stand together in this war for our freedom, for our independence.”

Karmanau reported from Lviv, Ukraine. Andrea Rosa in Irpin, Ukraine, and Associated Press journalists around the world contributed to this report.