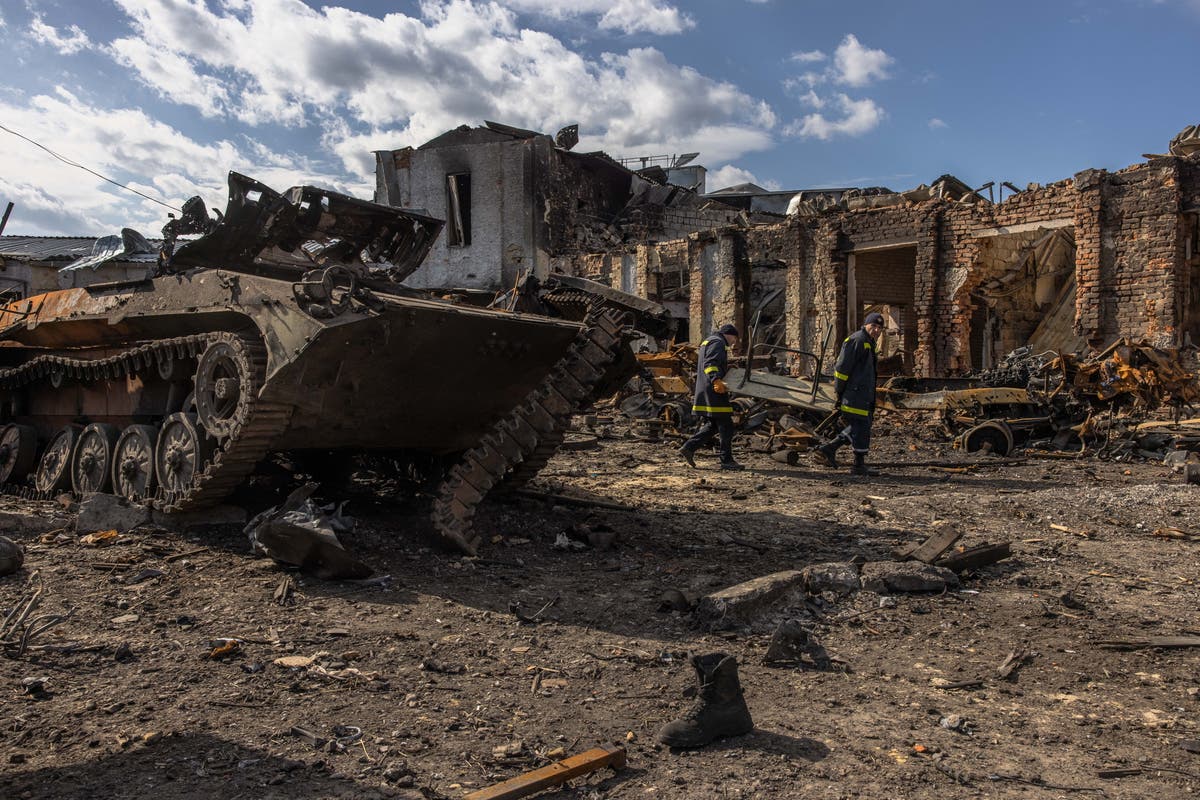 ‘We’ll fight for every meter of our land, for every citizen’: President Zelensky

Britain has sanctioned 14 more individuals linked to Russia’s war in Ukraine, including the colonel-general who has been dubbed the “butcher of Mariupol”.

Mikhail Mizintsev, the chief of the national defense command and control centre, is “responsible for planning and executing the siege and bombardment of Mariupol”, according to the British government.

Prominent Russian state media journalists such as Anton Anisimov, the editor of Sputnik, were also included in the sanctions. Announcing the latest raft of measures, British foreign secretary Liz Truss said “nothing and no one is off the table”.

Meanwhile, Russian forces are not withdrawing but regrouping, Nato Secretary-General Jens Stoltenberg has said, commenting on Moscow’s claim it would be scaling down military operations around Kyiv.

A former commander of the British army suggested that Nato had been “defeated” by Vladimir Putin’s war in Ukraine. General Sir Nick Parker said the western alliance’s “bluff was called”, as it had been “unable to stop the Russians trampling all over Ukraine”.

Norway’s president has urged Vladimir Putin to end his war in Ukraine.

Jonas Gahr Stoere spoke to the Russian president for an hour. In comments made after their discussion, he said it was best to leave nothing “untried”.

“I asked the president urgently to end the war in Ukraine, pull out Russian troops and secure humanitarian access,” Jonas Gahr Stoere said.

“We have very limited expectations of what could be achieved, but nothing should be left untried in the situation we are now in.”

Twenty people were killed in an air strike on the southern Ukrainian city of Mykolaiv on Tuesday, its emergency services have said.

One person died in hospital and 19 bodies were pulled from the rubble, it said in a statement on Thursday.

Originally, 12 people were thought to have lost their lives.

As we mentioned earlier, the Ukrainian government is sending transport to Mariupol in an attempt to rescue civilians trapped there.

“We will do everything possible to ensure that buses arrive in Mariupol today,” says Ukraine government

‘Cut off his ear’: the ruthless Butcher of Mariupol

Colonel-General Mikhail Mizintsev, sanctioned by the UK, is accused of ordering the destruction of a maternity hospital and theater where more than 1,000 civilians were sheltering. Tom Batchelor looks at his background:

Roman Abramovich, who is sanctioned by European nations over Russia’s invasion of Ukraine, was part of the Russian delegation at peace talks in Istanbul this week and is “sincerely” working to end the war, Turkey says.

Abramovich made a surprise appearance at Tuesday’s talks in Istanbul, but video footage showed him seated among observers rather than with the negotiating teams.

“Abramovich participated in the negotiations as part of the Russian delegation. Rather than looking at who was at the table, we should look at on whose behalf they were there,” he said.

Turkish Foreign Minister Mevlut Cavusoglu said Abramovich had been liaising between Kyiv and Moscow and working “sincerely” to end the fighting.

“Of course, official talks are important, negotiations are important, but public opinion is sensitive, everyone wants to maintain their position, and there are channels that should be kept open between leaders and countries. Here, Abramovich plays a useful role,” he said.

Kremlin Dmitry Peskov had said Abramovich was not an official member of the Russian delegation, but acknowledged his presence to “enable certain contacts”.

A member of Nato, Turkey shares a maritime border with Ukraine and Russia in the Black Sea, has good ties with both and has offered to mediate. It has supported Kyiv, but also opposes sanctions on Moscow, including measures against Abramovich and other Russian billionaires.

Russian soldiers surrendering in Ukraine have been advised to use the codeword “million” in an apparent reference to the financial reward on offer for laying down their weapons.

A guide produced by the Ukrainian Bar Association lays out the financial compensation surrendering troops can expect, and says valuable items will be confiscated and returned when the individual is released at the end of the war. Tom Bachelor reports:

Russian forces in Ukraine are not withdrawing but regrouping, Nato Secretary-General Jens Stoltenberg has said, commenting on Moscow’s announcements about scaling down military operations around Kyiv.

“According to our intelligence, Russian units are not withdrawing but repositioning. Russia is trying to regroup, resupply and reinforce its offensive in the Donbas region,” Mr Stoltenberg told reporters in Brussels.

“At the same time, Russia maintains pressure on Kyiv and other cities. So we can expect additional offensive actions, bringing even more suffering.”

New sanctions will raise pressure on Putin, says No 10

Downing Street said the latest sanctions were a sign that the government wanted to continue to “further ratchet up the pressure” on Vladimir Putin’s regime.

The Prime Minister’s official countries said: “We know that can adapt to sanctions over time so it’s right that we keep moving forwards on this.

“It’s equally right to place sanctions on those who are seeking to misinform people at a mass scale and that’s who the sanctions are targeted at today – famous TV anchors on state-owned TV who push forward the falsehoods that are misleading some of the Russian people into not understanding the situation in Ukraine and some of the wanton destruction and killing of civilians that we’re seeing.”

Asked whether the UK believed Colonel-General Mikhail Mizintsev – “the butcher of Mariupol” – was guilty of war crimes, the said: “I think no one can doubt in looking at what’s happening in Mariupol there, on the face of it, appears to be evidence of war crimes.

“Formally, that is not a distinction that we can rule on. But clearly, no one can be in any doubt by looking at the situation that it is a horrific thing.”

Ukraine working with ICRC for return of ‘abducted’ citizens

Ukraine is working with the International Committee of the Red Cross (ICRC) to return citizens who have been “abducted or forcibly relocated” to Russia, the country’s prime minister has said.

Kyiv has accused Moscow of forcibly deporting thousands of Ukrainians in the first five weeks of the war.

Britain has sanctioned a further 14 individuals and companies linked to Russia’s war in Ukraine.

Those affected include Sputnik’s editor Anton Anisimov and Mikhail Mizinitsev, the chief of the national defense command and control centre.

The latter is “responsible for planning and executing the siege and bombardment of Mariupol”, according to the British government.

Since yesterday, the UK has the legal powers to prevent maintenance on jets and yachts belonging to sanctioned individuals.