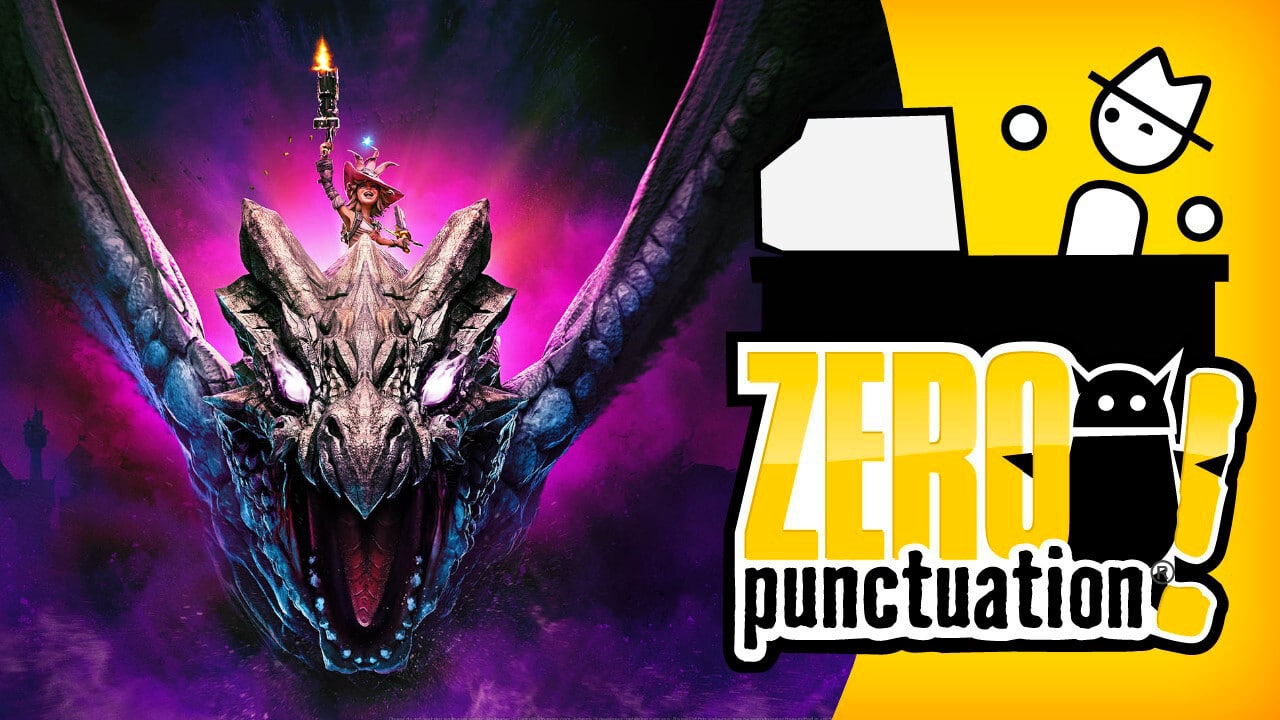 Hey, kids! Are you trying to write a comedy game but are worried you don’t have the chops? Well, worry no more! You don’t. But you can fake it ’til you make it with the patented Borderlands method! A simple three-step process that will turn any dry functional dialogue line into gut-busting hilarity. Step one: say the thing. Step two: keep talking like you’re a socially inept partygoer who’s just had his first line of coke. Step three: transition into some kind of embarrassed tangent to reflect a level of self-awareness otherwise largely absent from the work. Let’s see it in action! “Go through that door” becomes “Go through that door because there’s probably treasure on the other side and by treasure I mean more hideous violence against strangers which is treasure to me. My doctor says I should get out more.” Now was that funny or what? No, it wasn’t. Not in the least. But it does have a sort of comedy vibe about it and maybe that’s all you need. You know, it’s comedy in the sense that Owen Wilson is an actor. Obviously I’m being facetious here, there’s a lot more to Borderlands’ specific brand of humor than just characters who talk too much. Sometimes they do it in a silly voice as well. And some of them shout a lot.

Little wonder then that the breakout character of the Borderlands series has been Tiny Tina, a character who BOTH shouts a lot AND puts on a silly voice. Which apparently set her enough apart from all the other neon-tinted oversharing questgivers that she gets her own game now. I’ve directed a fair amount of bile at Borderlands and the occasional bout of huffy unimpressed silence when I hadn’t hydrated properly that day but that just meant that its spinoff Tiny Tina’s Wonderlands had nowhere to go but up, especially right after playing Babylon’s Fall which could inhale all the bile in the world and still not stop sucking ’til it’s spitting up your ankle bones. And after all that, I hated Tiny Tina’s Wonderlands a lot less than I thought I would. I mean, obviously I hated every single moment a character opened their fucking mouth to deliver another stream of useless overwritten lolrandom flavor text but on the other hand the game didn’t seem to be trying to be cool on top of trying to be funny, and that just about lowered the cringe to a tolerable background level. Dialogue aside the overhanging premise isn’t unfun.

The whole game is a visualization of Tiny Tina’s D&D campaign so its fundamentally cliched fantasy world is constantly riding the fourth wall like a self-analytical exercise bike, and unfolds in accordance with its creator’s silly, silly voiced whims. There’s even a whole one gag that I laughed at. Without spoilering, it was the method by which the protagonist crosses the ocean around the end of the second act. And I laughed because of the visuals, not because of anything anybody said. Fucking write that down, Gearbox. Anyway, the plot is, Tiny Tina plays D&D with the three individuals she hasn’t quite finished alienating yet: stock Borderlands egotistical handsome person who talks too much and stock Borderlands violence-liking robot who talks too much, and the protagonist, who is silent until they go through their character customization and chooses their voice pack, after which they talk too much. We set out upon a quest to travel across the land and defeat the evil dragonlord, who let’s just say couldn’t be described as the taciturn sort. Still, the fact that the characters all talk too much one could possibly appreciate as an overhanging metajoke as it undermines the general tone of the epic fantasy story, even if all the individual gags make me want to break wind into the mouths of the writers and not stop ’til their corpses function as dirigibles.

All in all, and take this for the extremely qualified statement that it is, Tiny Tina’s Wonderlands is probably the Borderlands game I’ve most enjoyed playing. Or least disliked. And it is a Borderlands game, you might be initially fooled when the first thing it tutorializes is attacking with a melee weapon. But then you notice the default control for that is an exotic faraway key that your finger needs a sherpa and a week’s provisions to get to, and then shortly the game hands you some kind of hand crossbow thing that I guess still fits the theme, but then the facade finally drops and it’s back to the classic Borderlands experience, shoot enemies, fill your invisible wheelbarrow with all the shotguns that the corpses fart out, make sure you’ve equipped the shotgun with the highest numbers then wheelbarrow the rest to the nearest pawn shop. There are RPG elements and multiple player classes with different special attacks but it’s all just the rattley playing cards on the spokes of the ever-spinning wheel that is shooting dudes and analyzing shotgun numbers, a heady mixture of high impact violence and data validation. Not that you’re obliged to put much work into the shotgun analysis, you can just blindly equip whatever gives you the highest equipment score.

But if you do that every now and again you get fucked by the random gun generation and get saddled with a sniper rifle that only shoots pieces of corrugated cardboard that leave the barrel at a forty-five degree angle which does theoretically have the highest damage potential but only if it fires inside the enemy’s rectum. Where Teeny Wonder’s Tittybar differs from Borderlands is that it uses a representative map screen rather than a great big connected overworld, but I welcome that. I’ve got huge overworlds blocking every sink drain and bodily orifice in my house, I appreciate having less of a commute. The map is dotted with little mini dungeons and random encounters that teleport you to one of a small handful of copy pasted environments for yet more gun battles, but let’s face it, most Borderlands games are endless sequences of gun battles that might as well have been copy pasted, so I appreciate the mask coming off, there. The random encounters that appear if you walk through long grass feel especially unnecessary, but they can be canceled by smacking them in the chops as if to say “No! Bad random encounter!” so that’s like, doubly useless as a game mechanic but I do wish more RPGs with random encounters had the option to just bitchslap them away.

Oh shit I’ve just had a horrible thought that someone might summarize this video as broadly positive. Better nip that in the bud. It is my favorite Borderlands game in the sense that the rinse out and spit is my favorite part of the dental appointment. I’d still rather be doing something else. After a while when the game starts obliging you to do a minimum number of sidequests to be sufficiently leveled for the next plot mission and most of the sidequests only entail grinding through yet another copy pasted gun battle but with a different silly voiced person shouting over it , the soul-crushing slog of the inevitable grind only becomes more apparent. I leave it to personal taste whether the self-aware comedic tone ameliorates the dullness of the grind or only worsens it somehow, like a spree killer who apologises first. I felt I needed to clarify my position because people have been telling me I’ve been going too easy on games lately. Maybe as I’ve aged I’ve come to realise there are better things to waste your energy on than getting angry at things that never change. Like cleaning out the shower drains. Or harvesting transplantable retinas from the eyeballs of unwanted shelter animals. Or knitting.