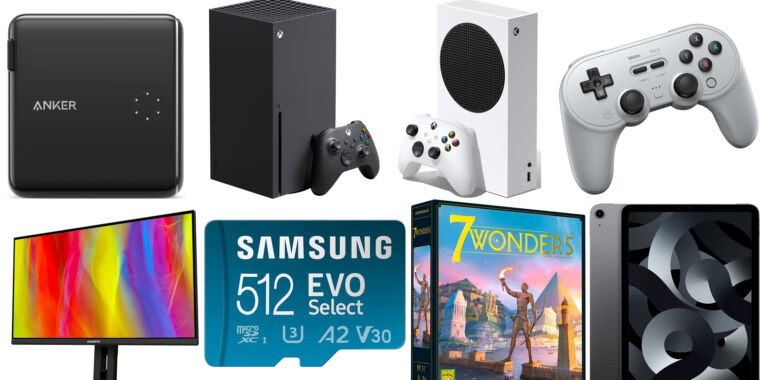 It’s the weekend, which means the time has come for another Dealmaster. Our latest roundup of the best tech deals from around the web is headlined by more of a PSA than an outright discount: if you’ve been interested in buying one of Microsoft’s latest game consoles, the Xbox Series X or Series S, it looks like you may finally be able to do so without having to rush to beat scalpers or keep a constant eye on stock trackers.

The more powerful Series X, for one, has been in stock at Walmart for most of the past couple of weeks. There’s no discount from Microsoft’s $499 MSRP and you’ll need to log into a free Walmart account to checkout, but the process of actually obtaining the Series X now appears to be far more stable than it has been for the past year and a half, during which time the console has typically either sold out within minutes or not been available at all.

If Walmart’s supply runs out, Microsoft itself has the Series X in stock as well, albeit in bundle form. This package includes the console, a second controller (one comes in the box), and one of a handful of games. The cheapest game option is the Ars-recommended Assassin’s Creed Valhalla for $24, though the selection also includes the newly acclaimed RPG Elden Ring at full price. If you planned on picking up an extra gamepad and one of the available games anyway, this isn’t the most egregious bundle we’ve seen in recent months.

The Series S has been slightly easier to find as of late, but now we’re starting to see genuine deals for the device at certain retailers. As of this writing, for instance, Newegg will let you take $30 off the normally $300 console when you use the code “APRBRA338” at checkout.

We’ve broken down the differences between the Series X and Series S before, but in short, the Series X is the more futureproof of the two, offering a more powerful GPU, more memory, and more storage space (1TB, versus the 512GB) in the Series S). If you have or plan on buying a 4K TV and care about achieving the highest graphical settings in your games, it should be worth the extra $200. The Series X also has a disc drive, so you’ll be able to pick up used games, whereas the Series S can only play digital downloads.

That said, the Series S can play all the same games as the Series X, and while it isn’t built for higher-end 4K gaming like the Series X (instead aiming for a 1440p resolution), it still brings a marked step up in performance compared to the older Xbox One. It’s a decidedly more compact piece of hardware, too, and its lack of a disc drive doesn’t stop it from pairing well with an Xbox Game Pass subscription, if you already pay for that. If you’re looking for a secondary console or just a way to play Halo, Forzaand other Xbox games on a smaller screen, it’s a good value.

There’s still a distinct possibility that these consoles sell out by the time you read this, and unfortunately, supply for Sony’s PlayStation 5 still appears to be hamstrung by the component shortages and intense, pandemic-fueled demand. Many gaming devices have faced over the past two. years. But if you’re sold on Xbox’s game library and prefer to use a console over a gaming PC, accessing the latest generation of hardware seems to be getting easier.

If you don’t need a new console, though, our roundup also includes a new low price on the 512GB version of Samsung’s Evo Select microSD card, plus discounts on recommended USB-C chargers from Anker, board games, 8BitDo gamepads, LG OLED TVs, gaming monitors, and more. You can have a look at our full curated list below.

Ars Technica may earn compensation for sales from links on this post through affiliate programs.

Featured deals of the day