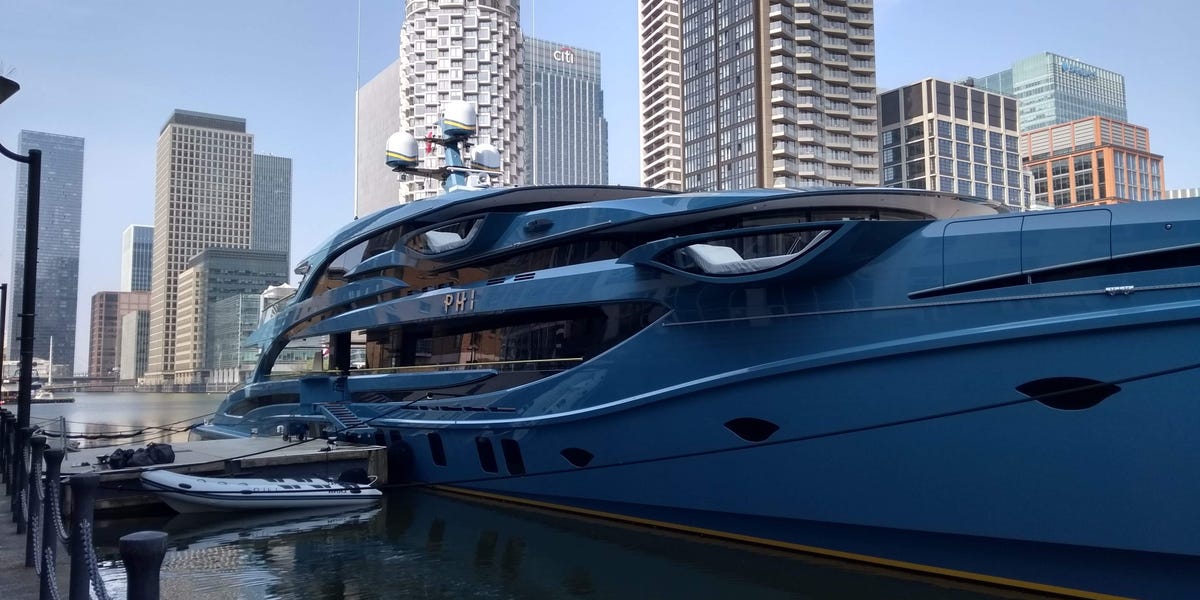 The captain of a $50 million yacht owned by a Russian businessman said its detention by British authorities was “government overreach and nothing more than a publicity stunt.”

The yacht, Phi, was detained by the UK on Tuesday in Canary Wharf, London’s financial hub. The Financial Times reported that the 192-foot vessel is owned by Vitaly Vasilievich Kochetkov, who founded Motiv Telecom.

The UK transport secretary, Grant Shapps, said that by seizing the vessel, authorities had “turned an icon of Russia’s power and wealth into a clear and stark warning to Putin and his cronies.”

The West has been sanctioning Russian elites and oligarchs and seizing their assets to put pressure on the country to stop its invasion of Ukraine. But Shapps didn’t say whether the yacht was owned by a sanctioned oligarch, and the National Crime Agency (NCA) told Insider it was “not providing detail in relation to the owner.”

Kochetkov, who is alleged to be the owner, has not been sanctioned by the UK. But on March 1, the UK banned all Russian-owned or -operated ships from its ports, and gave authorities the power to detain Russian vessels. Shapps said in mid-March that the UK was “investigating a small number of yachts moored in this country” with suspected links to Russian oligarchs.”

“The vessel isn’t seized, merely detained,” an NCA spokesperson told Insider, speaking about Phi. “It remains the property and responsibility of the owner but is effectively prevented from leaving.”

Discussing Phi’s detention, its captain Guy Booth said on LinkedIn: “This is a government overreach and nothing more than a publicity stunt.”

He said claimed that collectively punishing all Russians for the actions of one person “is illegal under international law,” citing clauses from both the Hague and Geneva Conventions.

“The way Grant Shapps has thrown the vessel and her crew in the media spotlight today has shown a blatant disregard to the security and safety of British crew working on board the yacht,” Booth told Boat International.

Phi has been moored in Canary Wharf since December after it made its maiden voyage from the Netherlands.

“The ownership of the yacht was deliberately well hidden,” the NCA said in a statement, adding that the ship was registered to a company based in the islands of St Kitts and Nevis and carried Maltese flags “to hide its origins.”

Insider visited the dock before Phi’s detention was announced and has returned multiple times since. For the first roughly 24 hours after the detention notice was served to the vessel, the boat didn’t look any different. The only physical barriers to the boat were two thin chains separating the dock from the footpath, which were in place along the whole footpath and looked easy to step over.

But on Wednesday afternoon, staff from the Canal and River Trust erected a metal fence around the dock, images from Getty Images photographer Richard Baker show.

Last week, Insider saw staff on the deck cleaning the vessel. Since the detention was announced, Insider has seen some staff in Phi-branded clothes on the yacht but they have largely stayed hidden from view.

Insider had also spotted a small inflatable Phi-branded dinghy, which had been docked next to the vessel before it was detained. It remained there until late Wednesday morning, when it was removed.

Insider saw multiple passersby taking photos of the vessel since the detention was announced.

“I was expecting it to be bigger than it actually is,” one local resident, who has watched dozens of boats and yachts dock in Canary Wharf, told Insider.

The yacht also has two small signs referring to the UK travel company P&O Ferries, which laid off 800 seafarers earlier this month. “P&O? Justice for the 800,” Phi’s signs read.