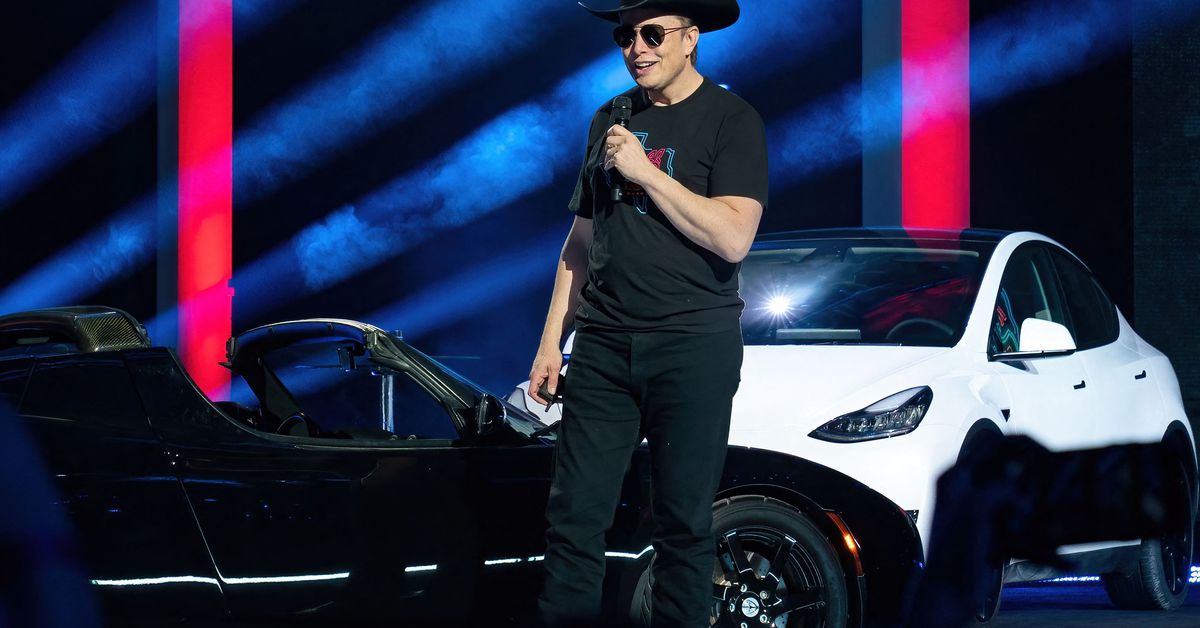 Tesla opened its Austin, Texas-based Gigafactory on Thursday, a crucial step in the company’s delayed plans to begin production of its electric Cybertruck. To celebrate the opening, Tesla held an event, billed as a “Cyber ​​Rodeo,” to which it invited 15,000 people to listen to live music, eat food, and pay homage to Elon Musk and his company.

“We are really entering a new phase of Tesla’s future,” Musk told the audience. Clad in a black cowboy hat and aviator sunglasses, Musk said he was excited to begin working on Cybertruck production at last. “I can’t wait to see this baby in production, it’s going to be epic.”

Along with a new version of the Cybertruck, Musk also showed off a new Roadster vehicle, which is slated to begin production next year. He also teased a robotaxi he said would look “quite futuristic” but didn’t elaborate or provide any details.

It is the company’s fourth factory in the US, following the vehicle factory in Fremont, California, battery factory in Sparks, Nevada, and solar factory in Buffalo, New York. Tesla also has a vehicle factory outside Shanghai, China, and recently opened its first European factory near Berlin, Germany. Tesla spent an estimated $5 million purchasing the land outside Austin, plus another $1.1 billion to build the plant.

“We need a place where we can be really big, and there’s no place like Texas,” Musk said. “We are going to move to a truly massive scale.”

The milestone was achieved less than two years after Musk declared that Austin would be the site of the company’s next Gigafactory and less than one year after Tesla officially moved its headquarters to Texas from California. In addition to the new Gigafactory, Musk also operates a SpaceX facility in Brownsville, Texas, and he reportedly has been living at the multimillion-dollar home of a friend along a lake in Austin. (Musk denied that report, claiming he currently resides in a “tiny home” in Boca Chica.)

The addition of the new Gigafactory is expected to boost Tesla’s capacity in the US, which has been long constrained by space limitations. In 2018, the company famously erected a tent outside its factory in Fremont, California, to help meet production goals of the Model 3. At the time, Musk said the company’s California factory was “bursting at the seams.” Tesla has said it expects to make 1.5 million vehicles in 2022, after producing slightly less than 1 million vehicles last year — a 50 percent increase.

The Texas factory is expected to be the site where, starting in 2023, Tesla will make its long-delayed Cybertruck. Indications that the Cybertruck would be delayed first emerged last year, when the online reservation page was changed and then later withdrawn from the site. Musk had said that he expected a few trucks to be delivered to customers by the end of 2021, but no deliveries were ever made. The Cybertruck has already gone through some changes since its initial reveal in 2019 — including the addition of a comically oversized single windshield wiper, traditional folding mirrors, and invisible door handles.

In addition to the Cybertruck, Tesla also plans to build Model Ys and Model 3s destined for the East Coast, as well as the long-delayed Tesla Semi. The company has already started to build Model Y crossovers at the unfinished Texas Gigafactory in the fourth quarter of 2021, according to the company’s latest earnings report.

The Texas Gigafactory is located on about 2,100 acres of land east of the Austin-Bergstrom International Airport, with about two miles of exposure to Texas’ Colorado River. The company has said it will hire up to 5,000 workers at an average salary of $47,147, with entry-level positions starting at $35,000. Today, Tesla employs about 10,000 people at its only US car plant in Fremont.

In exchange, Texas’ local government has lavished tax breaks and incentives on the company worth millions of dollars. In 2020, the local school district voted to approve $50 million in tax breaks for Tesla, while Travis County commissioners approved a deal worth at least $14.7 million, according to Reuters,

More broadly, Tesla has faced criticism over its labor practices and workplace safety concerns, mostly focused on its factory in Fremont. The company was sued by California’s civil rights agency for operating what it describes as a “racially segregated workplace.” And last year, a judge awarded a Black former Tesla employee $137 million in damages after he reported a hostile work environment where he heard “daily racist epithets” including the n-word and was told to “go back to Africa” ​​by colleagues.

Tesla began scouting the US for a spot to build a new factory back in early 2020. “Scouting locations for Cybertruck Gigafactory. Will be central USA,” Musk tweeted on March 10th, Nashville, Tennessee, was reportedly an early candidate, before Austin and Tulsa ultimately emerged as the finalists. Officials in (and residents of) Tulsa put on a lot of flashy moves, like painting a 70-foot-tall statue of an oil driller to look like Musk.

The new facility opens as the company continues to struggle with shutdowns of its Shanghai factory as the city deals with strict lockdown measures brought by an uptick in COVID-19 cases. Despite this, the company is reporting vigorous sales in the first quarter of 2022, with 310,048 vehicles reaching customers.