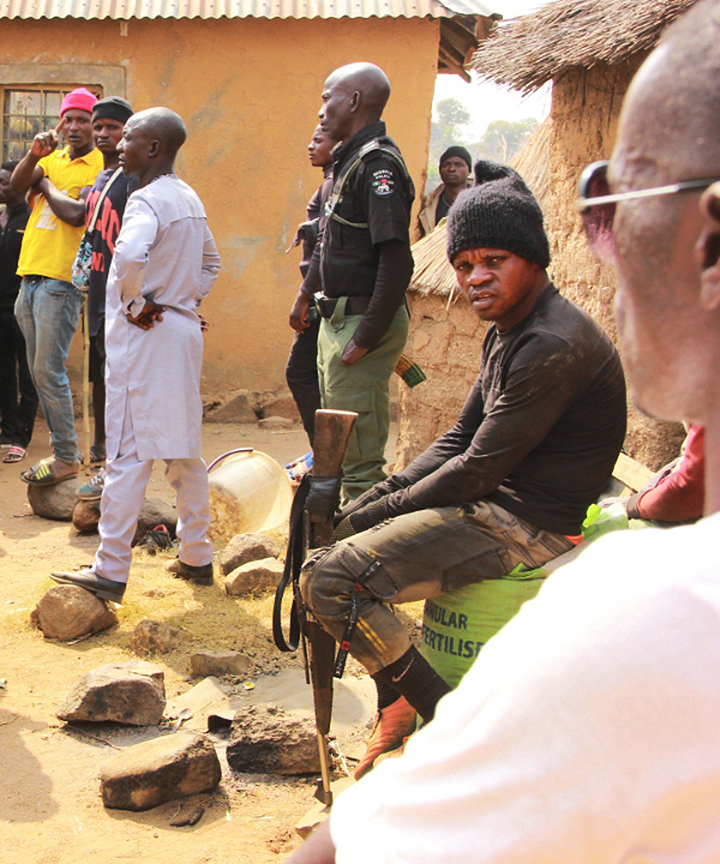 The air was a chilly 55 degrees Fahrenheit at midnight on Jan. 12, about as cold as it gets on the forested savannah of Nigeria’s Plateau state. But John Rivi could not think about the cold.

Despite the darkness, he could see the flashlights of 500 terrorists with assault rifles heading for his village of Ancha, Nigeria, and Rivi, 38, knew that he and 21 young men carrying single-shot rifles were the village’s first and only line of defense . As the terrorists approached, the volunteer guards fired their muskets and shotguns at the flashlights, which were moving to encircle the village of approximately 400 people.

The response was “a rain of fire,” Rivi told The Epoch Times.

The goal of the guards was to halt the attack long enough for the families with children and senior citizens to find paths out of the village before the terrorists could go from house to house, shooting anyone remaining and burning their homes and food barns.

A family of 10 that decided to stay behind to comfort lame, elderly parents was found shot to death a few hours later.

When police arrived after sunup, the bodies of two volunteer guards from a neighboring town were found on paths leading away from Ancha. They were men who had joined Rivi’s guard team. The two guardsmen and 18 Ancha victims were buried that afternoon.

The armed volunteers are known across Nigeria as “vigilantes,” and their losses in recent months have sparked speculation that the bandit-terrorists that are burning entire villages are deliberately taking them out.

Close to 200 neighborhood watchmen have been killed while defending communities in recent years, according to leaders of volunteer watch units. Many have been forced to use slingshots and single-shot guns, while the military stands by — as it did that night in Ancha.

More than 50 vigilantes were killed in January by terrorist attacks in the northern Nigerian states of Taraba, Niger, and Plateau.

According to reports, large terrorist gangs in Zamfara state have scattered to neighboring states to the east to escape airstrikes by the Nigerian Air Force.

Lawmakers from the region have accused the military of failing to protect local communities. Military authorities have denied the allegation.

More than 60 vigilantes were ambushed in northeastern Taraba state, which borders Plateau, Benue, and Nasarawa states, on Jan. 8 as they rode motorbikes on their way to attack a terrorist headquarters, according to TVC News. At least 40 members of the vigilante group were killed.

The team had previously raided several terrorist camps in the county while the military stood by, according to local tribal leader Mafindi Danburam.

“This [the vigilantes] is the only machinery we have on ground for fighting [the terrorists] in Taraba state, ”Damburam told TVC news.

Local reporters in Jalingo, the capital of Taraba state, told The Epoch times the Nigerian military hadn’t raided terrorist camps in the area.

“Maybe the military are being discreet about their operations, but I am not aware of any raid of terrorist camps by them,” one reporter said by phone.

Another strike against vigilantes was recorded in Shiroro County in Niger state, where four of them were killed in an apparent revenge mission.

Nigerian media outlets reported that 100 terrorists armed with assault rifles attacked a vigilante base on Jan. 30 at noon in the small town of Galadima Kogo. Seven paid civil militia, four vigilantes, and several local residents were killed in the attack.

The attack on one of the few surviving towns in the terrorist-infested county was a reprisal for previous raids by vigilantes on terrorist camps, local youth leader Abubakar Yusuf Kokki told The Epoch Times in a text message.

“I believe the vigilantes were the target since they first attacked.”

The Jan. 12 attack on Ancha was followed by two targeted attacks on vigilantes that claimed the lives of six members of the group in surrounding towns.

On Jan. 24, terrorists killed three vigilantes in Dong, in Jos North County, according to Solomon Achus Gwott, the north-central assistant commandant-general in charge of crime at the Hunters Council of Nigeria.

The vigilantes were attacked at a mining site located two miles from a prominent military checkpoint, Gwott told The Epoch Times. A civilian woman was also killed in the attack, according to a member of the Nigerian House of Representatives, Dachung Musa Bagos.

“The three [vigilantes] were members of the same family and my constituents, ”said Bagos, who represents Jos.

The terrorist ambush took place on a bumpy dirt road on the outskirts of Adu as the vigilantes were on a routine patrol, according to Samson James, a guardsman who narrowly escaped the attack.

In recent years, close to 200 vigilantes have been killed while defending communities in the Middle Belt of Nigeria, according to Ola Azeez, coordinator of a neighborhood watch group in Plateau state. Azeez said 148 members of the group had been killed since the beginning of 2020.

“Those are the ones we have documented. Our members face daily attacks that mostly go unreported, ”he told The Epoch Times by phone.

Gwott said 15 of his group’s members had been killed in clashes with terrorists since 2020.

“They are attacking vigilantes because we are the ones giving them headaches. We know the terrain, and we are able to beat their strategies and counter them in the bush, even with their heavy artilleries, ”he told The Epoch Times.

A Nigerian military spokesman insisted that it is in full control of security in the central region and that it does not need vigilante assistance.

Maj. Ishaku Takwa of Operation Safe Haven told The Epoch Times that the vigilantes were inconsequential in fighting terrorists.

“How can vigilantes confront bandits? Bandits that are operating with RPGs [rocket propelled grenade launchers]? ” Takwa said. “Even yesterday [Feb. 1] with our armored tanks when we went for a raid in Kaduna, these [terrorists] planted land mines on our track, and they exploded. If it was vigilantes, how would they survive? Vigilantes that have Dane guns [single-shot rifles]. ”

Yet the vigilante groups have their defenders among them, including David Otto, a London-based military consultant.

“The targeting of vigilante networks by terrorists is to break the defenses of communities for easy takeover,” Otto told The Epoch Times in a text message. “The aim of insurgents is to occupy local territories and win hearts and minds — vigilantes are tasked to prevent such [forceful] occupation. ”

If the vigilantes are forced to stand down, half of Nigeria’s central region could be lost to terrorists in a few years, according to Bagos.

“If these attacks continue and [security troops] are forced to withdraw, we are in serious danger, ”he said.

Chris Kwaja, an adviser to the US Institute for Peace, said attacks on vigilantes could force communities to give up on self-defense and surrender to the terrorists.

“The targeting and killing of vigilantes in Plateau, in Zamfara, in Taraba, or Borno make it difficult for individuals to volunteer themselves to defend against terrorists,” Kwaja said.

The terrorists themselves acknowledge the efficacy of the vigilantes.

In a recent letter to Nigerian officials, Bello Turji, a feared terrorist gang warlord — offered to disarm, but only if the vigilantes would surrender their weapons as well.