Flights with Southwest Airlines were subject to nearly 2,000 delays or cancellations throughout Saturday, with the company blaming it on a failure of its IT systems.

As of 9 pm, FlightAware.com showed there had been 470 cancellations over the course of Saturday with 1,438 delays – about 40 percent of all flights flown.

‘We are experiencing flight disruptions across our network today due to briefly pausing our service earlier this morning as we worked to resolve an intermittent technology issue, as well as ongoing weather challenges impacting multiple areas within our system,’ the airline wrote on Twitter.

‘We offer our heartfelt apologies for any inconvenience, and we will continue to work with Customers who experience a disruption in their travel plans.’ 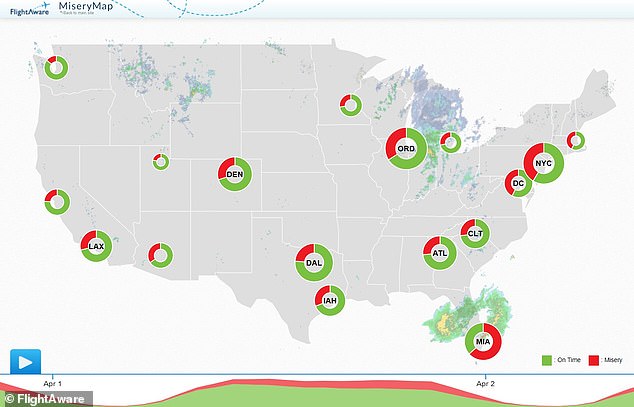 Although not specifically Southwest Airlines, a ‘misery map’ depicted a number of delays across the country on Saturday including Miami, Chicago, New York and Washington DC

There were dozens of frustrated travelers who posted on social media about how their weekend travel plans had been ruined.

One traveler who experienced a five-hour delay with the airline expressed their disappointment on Twitter.

‘So @SouthwestAir just going to continue to delay the flight and not offer any explanation of what’s going on or why?? Like people do not have plans? This is so ridiculous I am now going to miss my entire event due to this. I need some type of compensation for this.’

Initially, the source of delays was a ‘planned system outage,’ according to KPRC, where Southwest’s IT was down for two hours starting at 4 am

The airline blamed ‘intermittent performance issues following routine overnight maintenance of some of its backend technology,’ but the outage appeared to last at least an hour longer with delays affecting Southwest flights across the nation including Raleigh-Durham International Airport in North Carolina and Ronald Reagan Washington National Airport in Washington, DC 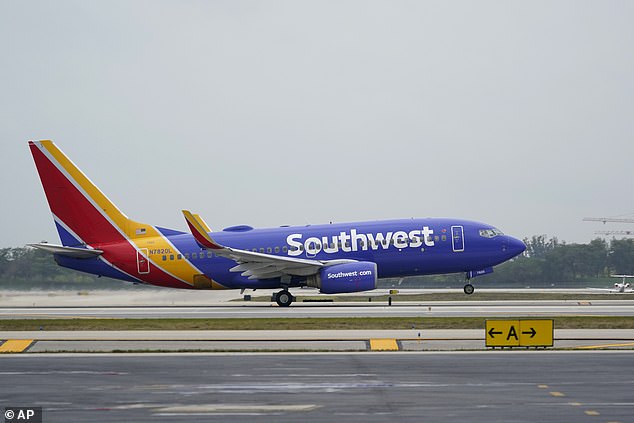 Southwest Airlines flights were delayed and canceled throughout Saturday

On April Fool’s Day, Southwest put up this cocky tweet. It didn’t seem so funny on Saturday to those traveling with the airline

On Friday, the airline made a joke in appreciation of April Fool’s Day.

‘You want a joke? Bag fees,’ the @SouthwestAir account wrote, but the tweet didn’t sit well one day later.

‘Kind of bad taste to make a Twitter joke when seemingly every flight today is delayed,’ wrote Ryan Breton in response.

‘Nice April Fools Day – You have hundreds and hundreds of passengers in Chicago that you can’t get on planes, and you have a hundreds more in Saint Louis, and that’s just what I saw – how about less jokes and more results,’ tweeted Christopher Dabek.

‘A joke is you canceling my families flight out of Orlando for no reason. THEN canceling our rebooked flight within 8 hours before take off. Unacceptable. Now we are stranded with no hotel and no way of getting home. Never flying Southwest again,’ added B. Hope.

‘This is almost as funny as receiving a text at 11:30 pm saying your am flight is canceled. The punchline is sitting on hold for 2-1/2 hours waiting to speak to a representative to re-schedule a flight. You guys dig deep on April fools,’ wrote another Twitter user. 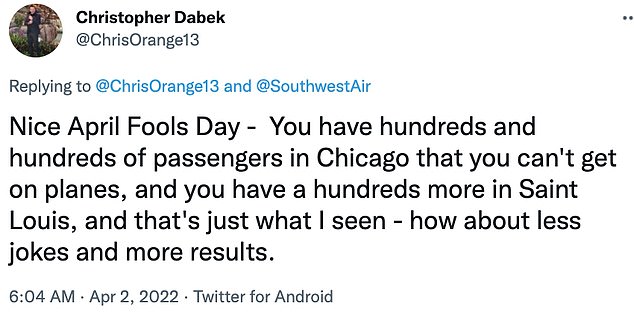 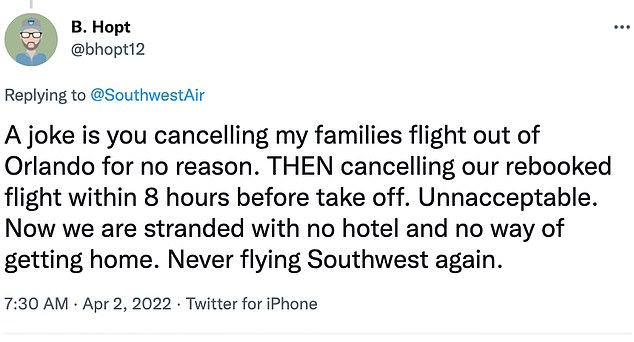 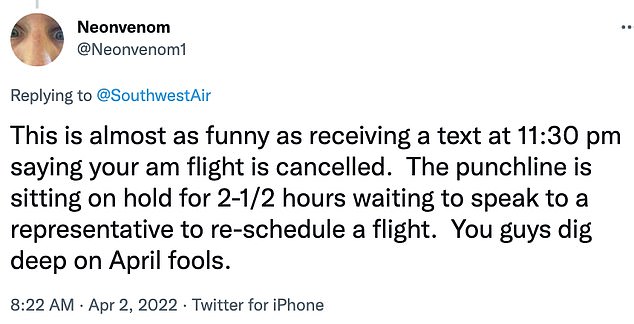 On Friday, Alaska Airlines had canceled more than 100 flights, affecting more than 15,000 passengers along the West Coast, as off-duty pilots picketed during an impasse in contract negotiations that have lasted nearly three years

About 9 percent of the airline’s flights were canceled, including 66 in Seattle, 20 in Portland, Oregon, 10 in Los Angeles and seven in San Francisco, according to the flight tracking website flightaware.com.

Pilots held a nationwide rally and picket line in all those cities, according to the Alaska Airlines Pilots union, who levied the blame on the airline for failing to staff up now that more Americans are traveling in a post-pandemic world.

‘Alaska Airlines failed to properly plan for increased travel demand and take the steps necessary to ensure it attracted and retained pilot,’ the union said in a statement, adding that those picketing were off-duty and would not have contributed to the cancellations.

The airline said in a statement that it admitted to falling short of serving thousands of customers, but also tried to put the blame on the pilots for continuing delays that could go into the weekend.

‘It takes everyone at Alaska to run a successful and reliable operation,’ the company said ‘We’re grateful for all employees who are working hard to get our guests to where they need to go.’

The cancellations and picketing come as air travel rebounds to pre-pandemic levels and demand is surging as many Americans head off on Spring Break for long-delayed vacations.

On Saturday, Alaska had far fewer issues with 79 flights canceled and 81 delayed. 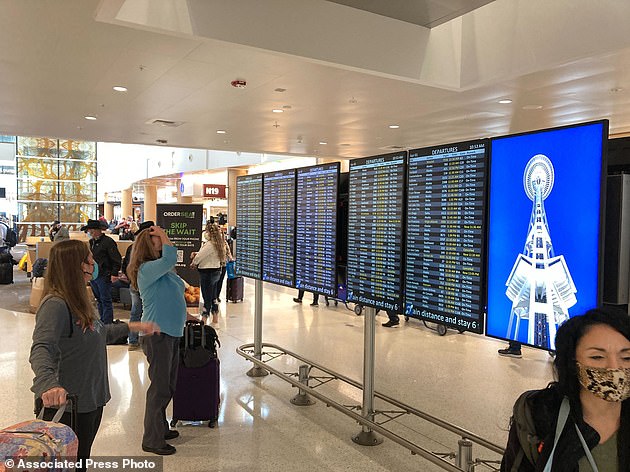 Travelers at Seattle-Tacoma International Airport check the status of flights as more than 15,000 are stranded on the West Coast following more than 100 flight cancellations by Alaska Airlines while pilots picket during a negotiation impasse 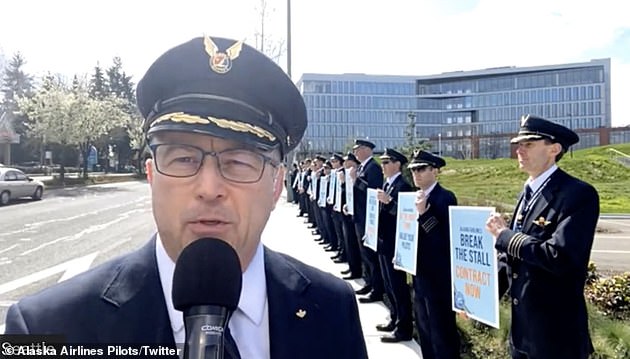 The pilots lined up outside the airport and held a conference at all their picketing sites on Friday to discuss the strains the pilots have faced in the last three years. Pictured, Captain David Campbell(left) outside the airline’s hub in Seattle, Washington