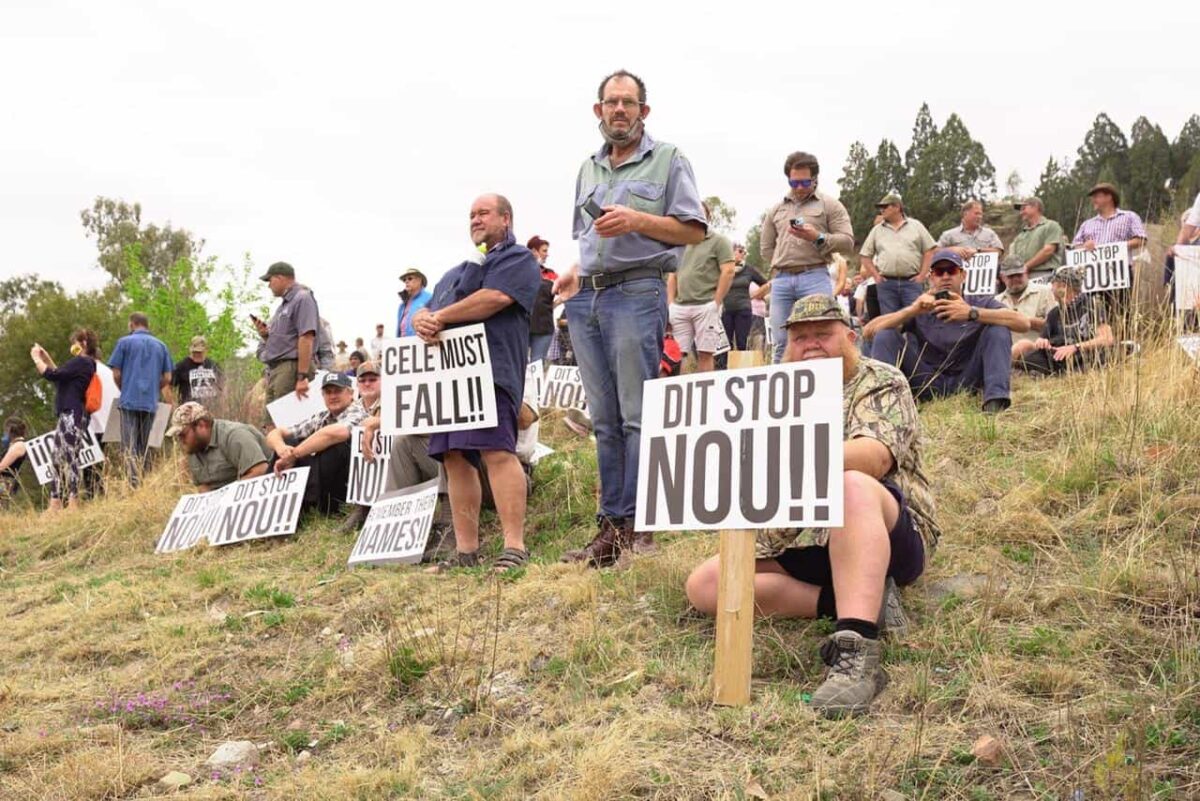 The following story contains descriptions of violence that may be disturbing to some readers.

Above the slightly built woman, on the wall of the farmhouse near a small town in South Africa’s North West province, is a framed photograph. It shows her wearing a stylish sunshine-yellow dress, black hair cascading onto her shoulders. The man alongside her is wearing a smart navy suit and tie, giving a thumbs-up to the camera.

“I do not know why Johan’s smiling,” she says softly, with a smile of her own. “He hated wearing a suit. He always called himself a ‘man of the dirt.’ This dirt, ”she adds, pointing toward an open doorway, to dry fields dotted with beef cattle.

On a summer night in 2019, Karlien and Johan van Wyk, along with their 6-year-old daughter, fell asleep on a couch in their living room while watching television.

Their two other daughters, 2 and 4, were asleep in a downstairs bedroom.

Karlien, 7-months pregnant at the time with their first son, was awakened by a “loud click,” the sound of a firearm being cocked next to her ear.

“There were three of them. They screamed at us, ‘Where is the money?’ Johan said, ‘We do not keep money in the house, but you can take anything else you want.’ They just shot him four times. He fell off the couch.

“Two grabbed me, and one said, ‘We are taking you downstairs.’ I fought back because I knew what they were going to do to me downstairs. Then my daughter said to them, ‘Please do not hurt my mommy. I’ve got money. You can have it. It’s in my piggybank. ‘”

That’s when Johan somehow got to his feet, says Karlien, and stumbled toward the attackers.

“All he said was, ‘Please…’ One of them said, ‘Finish him.’ A bullet hit him in the eye, and he fell in front of us, flat on his face. I hear that sound every day, or his body hitting the floor. He gurgled. I knew it was the sound of him dying. “

Karlien says the assailants then “strolled out of the house very casually.”

All they had stolen was the couple’s cellphones.

In August 2021, 30 men and women in bright red workers’ overalls and matching berets meandered through the Johannesburg commercial district singing and chanting.

“Shoot the boer [white farmer]! Kill the man! ” they sang.

Leading them was Julius Malema, a 40-year-old self-described “revolutionary” who says he’ll be president “sometime soon,” because his party, the Economic Freedom Fighters (EFF), is gradually winning the support of an ever -expanding legion of unemployed and poor.

Statistics South Africa (STATS SA) says out of a population of around 60 million, almost 11 million people who should have jobs, do not. Millions more are employed in the country’s informal sector, living hand to mouth.

President Cyril Ramaphosa’s African National Congress (ANC) government puts the official unemployment rate at 35 percent — the highest in the world, ahead of Djibouti and Equatorial Guinea, according to the 2021 World Population Review.

When “discouraged jobseekers” are included, say the state statisticians, the figure jumps to almost 47 percent.

At least 28 million citizens survive only because the government gives them monthly social grants of between 460 and 1890 rand ($ 30 and $ 126), according to STATS SA.

The EFF “commander-in-chief” calls white South Africans “land thieves,” who stole the land and its wealth from indigenous black Africans when Dutch explorer Jan van Riebeeck shipped into the Cape in 1652.

Since then, the descendants of both Afrikaner and English settlers have become globally recognized as some of the best farmers in the world, often overcoming harsh conditions to grow produce to feed the country, and for export.

Malema says black farmers could do this just as well, if not better.

These days though, when he’s not stamping his feet in protest on city streets, or visiting restaurants to check how many “illegal foreigners” are “stealing jobs from black South Africans,” Malema’s in court.

In 2011, when he led the ANC Youth League, he was convicted of hate speech for singing an anti-apartheid song first heard in the 1980s, called “Kill the farmer, kill the farmer.”

The ANC, which largely agrees that the song “belongs in the past,” simultaneously insists it’s “symbolic,” and was originally intended to “inspire rebellion against white supremacy,” not to encourage the murders of white farmers and their families.

Since his conviction and nominal fine 11 years ago, Malema has changed the lyrics from “Kill the farmer” to “Kiss the farmer.” But he and his supporters still follow those words with the refrain, “Shoot the farmer” and “shoot to kill.”

Malema declined to be interviewed at length by The Epoch Times, commenting briefly: “Just go and do your research, and you will come across all I have said about this song in the past; my feelings have not changed.

“I have said in my affidavit that the order is against the EFF singing, ‘Kill the farmer.’ There is no order against any song called ‘Shoot the farmer.’ ”

But AfriForum, the civil rights group that laid fresh charges of hate speech against Malema and the EFF late last year, says the song “advocates hatred on the grounds of race and ethnicity” and is an “incitement to cause harm.”

Ernst Roets, the group’s policy head, told the Equality Court that racial hatred, partly inspired by EFF incitement, is evident in the torture involved in a lot of attacks on white-owned farms.

“The most common forms of physical torture that occur include beatings, stabbings, burning victims with boiling water and molten plastic, and hot clothes irons. Some farmers are even slaughtered like animals or dragged behind their own vehicles. They’re tied to the vehicle with a rope and then dragged for vast distances, ”Roets said.

According to former police colonel Johan Burger, now a crime expert at the Institute for Security Studies in Pretoria, 1,242 white farmers were murdered between 1990 and 2020.

AfriForum disagrees with this statistic, saying its research shows approximately 4,000 have been killed since South Africa became a democracy in 1994, with many more thousands, including their wives and children, brutalized.

The government maintains that farm attacks are part of a “broader crime crisis” and are not racially motivated.

Roets has testified in court that this is contradicted by many perpetrators who’ve been found guilty of killings on farms.

“When Paulus Mandlazi, for example, was charged with committing five farm murders, he responded in court that he murdered these people because he wanted their money. He added, and I quote, ‘My hate for white people made me do it.’ And he said that he regarded murder white people as merely ‘going to work.’ ”