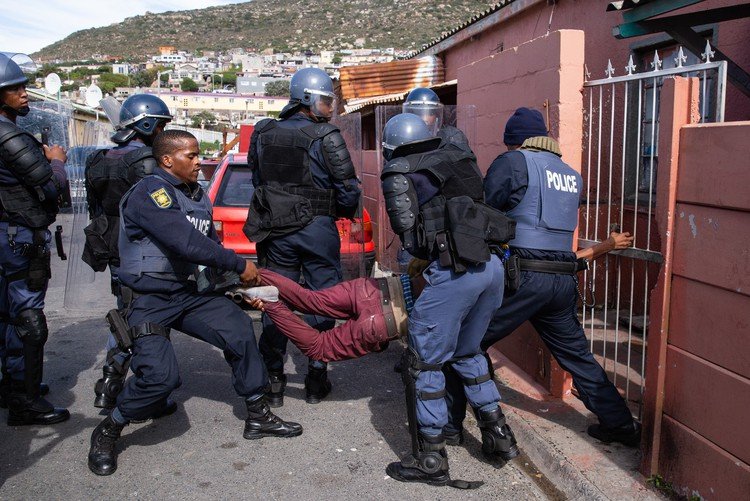 During the same time period, 11,300 women and girls were raped, according to police.

The latest crime statistics for South Africa — a nation populated by 60 million people — show dramatic increases in all violent crimes, including homicide, carjacking, and armed robbery.

Opposition parties say the “horrific” statistics show that South Africa is effectively a “war zone” no longer controlled by the ruling African National Congress, but by criminals.

“With 75 murders a day now, I think it’s time to accept that our rainbow is now soaked in blood,” Bantu Holomisa, leader of the United Democratic Movement Party, told The Epoch Times, referring to what was once the symbol of hope in post-apartheid South Africa.

Professor Guy Lamb, a criminologist at the University of Stellenbosch, said murder is always the best indicator of a country’s crime problem, not only because it’s such a serious offense, but because it’s a crime that’s almost always reported, unlike rape or robbery.

“What’s really worrying is that there’s been a 21 percent increase in murder from 2017/18. That’s massive. We’ve seen a similar trend of attempted murder of a 17 percent rise over that 5-year period, ”Lamb said. “Car hijacking is up more than 30 percent; cash-in-transit heists up by a jaw-dropping 40 percent. ”

A survey by Statistics South Africa shows that nearly 80 percent of South Africans do not feel safe in their own homes. Many feel “besieged” by criminals.

Emigration agencies report that there’s currently “unprecedented interest” from South Africans wanting to leave the country. At the same time, property consultants say there’s been a 40 percent jump in the past year of citizens wanting to buy property in other countries.

This “flight syndrome,” as the consultants put it, is driven by fear of crime, as well as an official unemployment rate of 35 percent, the highest in the world.

Economists say that if people who have given up looking for jobs are considered, the rate jumps to 46 percent.

“Sixty-five percent of young people who should be working do not have jobs,” Holomisa said. “It’s a time bomb. It’s not old people who are hijacking cars and blowing up money trucks: It’s young, angry, frustrated, strong men. This government’s economic policies have failed; any fool can see that. ”

International crime monitoring groups classify South Africa as one of the most dangerous places in the world.

The security group Armormax, for example, rates it as the third most dangerous place in the world, behind only Venezuela and Papua New Guinea. Five South African cities are among the group’s 20 “deadliest and most violent” urban areas.

The World Population Review ranks South Africa as having the fourth-highest rate of rape in the world at 72.10 incidents per 100,000 people, with its neighbor Botswana having the highest, at 92.93. The third is the tiny kingdom of Lesotho, which is surrounded by South Africa.

Lamb said citizens do not trust the police to protect them. In fact, people now take the law into their own hands.

“Violence is breeding violence. The traumatized are themselves inflicting trauma on others, ”he said. “They’re becoming criminals themselves. This is the vicious circle that we’re now trapped in. ”

In many townships, residents no longer bother calling the police when they’ve fallen victim to a crime. Instead, they call “neighborhood watch” groups or taxi associations, whose drivers sometimes moonlight as vigilantes.

“Residents will pay these non-state actors to recover stolen goods or to mete out street justice to suspected killers and rapists,” Lamb said. “The suspects are stoned to death and burned, often in sight of children, who begin to accept brutal violence as normal and the way to solve problems.

“Not to mention that some of the suspects are innocent of the crimes they’re accused of.”

In South Africa’s wealthier suburbs, citizens pay an estimated $ 6 billion per year to private security firms to protect them. Security officers now outnumber police members by more than two to one, according to government statistics. The state has responded by introducing tougher regulation of the private security industry while simultaneously cutting policing budgets by billions of rands.

Mental health professionals say South Africans are increasingly numbed to the violence around them, no longer wondering if, but when, they’ll be the next statistic.

Criminal gangs are now so brazen that they’re attacking heavily fortified security complexes and gated communities. These posh fortresses once were considered to be the safest places in the country, with their high, electrified walls and armed guards. That’s no longer the case.

The gangs carjack trucks and use them to smash their way into gated communities to steal, relying on the police’s usual slow response time to make their getaway.

Sometimes the criminals use fake IDs and QR codes to gain access to complexes, often in cooperation with security guards.

Veteran security consultant Rory Steyn, who ran security for President Nelson Mandela in the 1990s, said that “incredible levels of desperation” are one of the key drivers of crime.

“I was talking to a colleague in the private security industry recently, somebody who’s been around as long as I have, and he was saying he’s never seen it as bad as this,” he said.

Steyn also said it makes sense for criminals to attack gated communities where the wealthy live because they are “high-risk, high-reward” targets.

“If people have got guards and gates and electric fences and alarms, normally it’s because there’s something worth protecting, and criminals will now go to extremes in order to get a big payday,” he said.

Chris de Kock, a former police intelligence officer, said serious crime in South Africa has increased every year since 2011. He said the country is headed backward, toward the mid-1990s, when the country was regularly in the top three nations with the highest rates of crime.

“Violent crime dropped in South Africa in those years because there was visible policing, and there was intelligence-led policing,” de Kock said. “And then suddenly, these good strategies were cast aside.”

He replaced them with political allies who had little to no policing experience. This gave him license to allegedly plunder state-owned enterprises, knowing that law enforcement would not investigate him.

Zuma eroded the police to such a degree that the service lost the ability to combat criminals effectively, according to de Kock.

“The police no longer have the skills necessary in order to do a proper analysis of crime trends,” he said. “With no proper analysis, they can not send resources to where they are most needed.