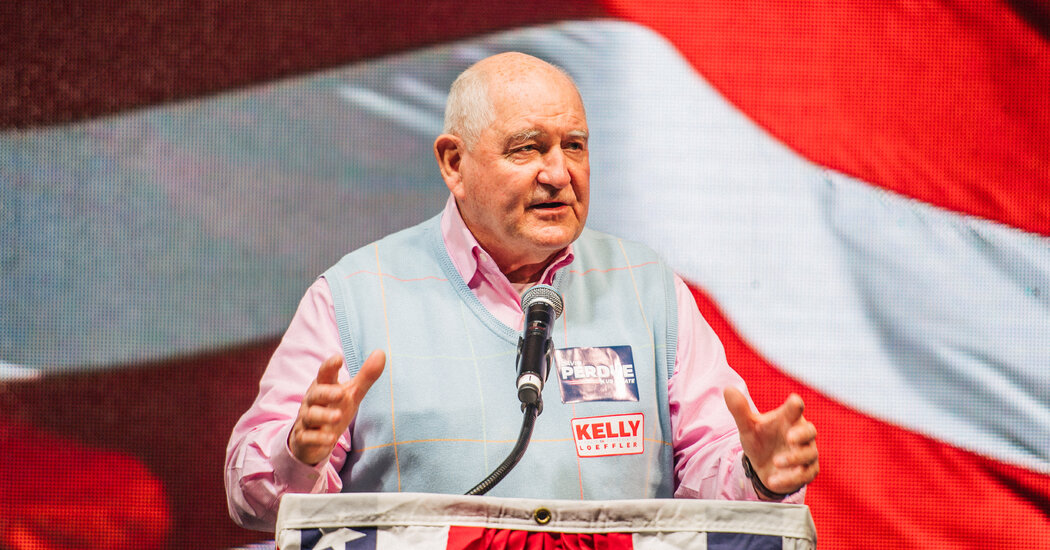 Georgia’s public university system said on Tuesday that former Gov. Sonny Perdue was its sole finalist to become chancellor, a choice that has outraged some professors and led a regional agency to threaten the accreditation of the 26-school system.

The likely appointment of Mr. Perdue, a Republican, comes during a volatile time in Georgia politics, with the State Legislature considering several bills that would ban, or limit, how race and activism are taught in the classroom.

“A chancellor’s job is to defend the system against such bills,” said Matthew Boedy, a rhetoric and composition professor at the University of North Georgia and president of the Georgia conference of the American Association of University Professors. “I can not imagine Sonny Perdue doing that.”

The association has publicly condemned how the university system selected Mr. Perdue, a process that largely occurred in meetings without faculty input and closed to the public.

Mr. Perdue served two terms as governor from 2003 to 2011, and later became Secretary of Agriculture under President Donald J. Trump. He would not be the first governor to move into academia: Former Gov. Janet Napolitano of Arizona, a Democrat, later ran the University of California system, and former Gov. Mitch Daniels of Indiana has led Purdue University since 2012.

“Governor Perdue stood out for his impressive experience and leadership in public service as well as a vast understanding not only of Georgia and its communities but of the issues facing the university system as we move forward,” Harold Reynolds, chair of the Board of Regents, said in a statement on Monday.

Mr. Perdue, a graduate of the University of Georgia, said he considered the opportunity to lead the university system, which has more than 340,000 students, as the capstone to a career of public service.

“Higher education is where I wanted to have a real impact as governor, only to be stymied by twin recessions,” he said in the board-issued statement.

In April, before the Board of Regents selected Mr. Perdue, the Southern Association of Colleges and Schools Commission on Colleges sent it a warning letter stating that the appointment of a former governor could “place the accreditation of the institution (s) they govern in jeopardy.”

If a college loses accreditation, warned the agency’s president, Belle S. Wheelan, it could cause enrollment declines, lead to bad publicity and revoke the school’s access to federal money.

Revoking accreditation to schools including the University of Georgia, Fort Valley State and Georgia Southern would be a monumental step. But the threat is part of the latest controversy for the Board of Regents, which in October approved a new policy where universities can fire tenured professors with little to no faculty input.

The policy, according to the American Association of University Professors, is the only one of its kind in the country.

That decision and the selection of Mr. Perdue are both intrusions on academic freedom, Mr. Boedy, the University of North Georgia professor, said. It’s “another death, wound, stab in the heart for anybody that works in the university system to have someone like this,” he said.

Mr. Perdue’s appointment as chancellor would also limit his contributions to the campaign of David Perdue, his cousin and a former senator who is running against Gov. Brian Kemp in May’s Republican primary.

Sonny Perdue had campaigned on his cousin’s behalf during David Perdue’s 2020 re-election campaign, which he narrowly lost to Senator Jon Ossoff.