‘SNL’ Spends a Night at the Oscars With Will Smith 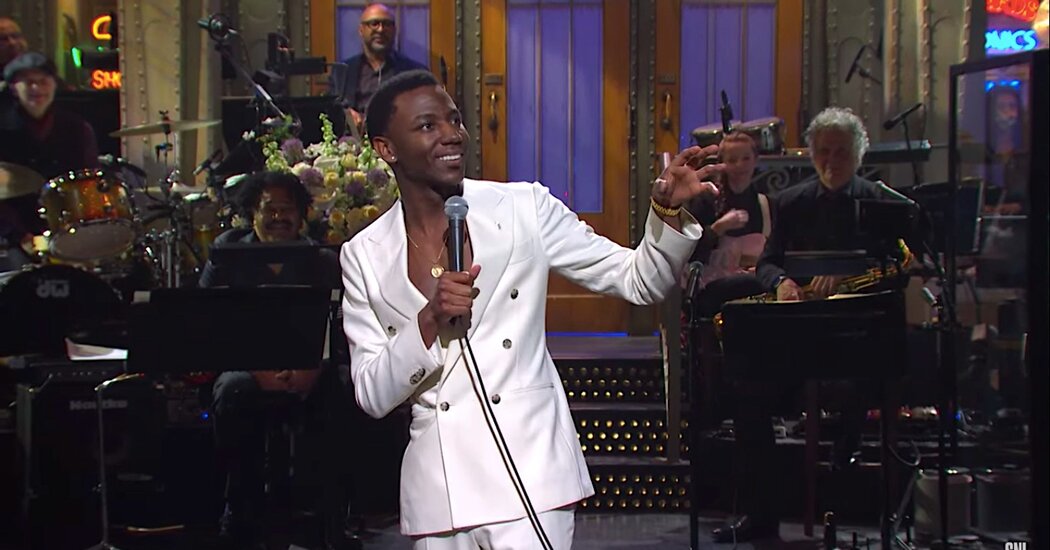 In his opening monologue on “Saturday Night Live,” the host and comedian Jerrod Carmichael swore he wouldn’t do it. “I’m not gonna talk about it,” he said. He didn’t even have to say what it was.

But sure enough, “SNL” found several ways to take on the widely discussed incident from last weekend’s Academy Awards, in which Will Smith slapped Chris Rock (a former “SNL” cast member) after he made a joke about Jada Pinkett Smith.

The Slap was addressed most directly in a sketch that aired about halfway through the program, which cast Chris Redd as Smith and Carmichael as a seat filler at the Oscars show who found himself next to Smith in the moments before Rock made his remarks.

Carmichael at first professed to be a fan of Smith’s, saying that he admired his film “The Pursuit of Happyness” and still used his song “Gettin’ Jiggy Wit It” as his ringtone. He asked if he could take a selfie just as they noticed Rock had come onstage.

Next, we heard the sound of Rock’s voice uttering his now notorious joke: “Jada, I love you. ‘GI Jane 2,’ can’t wait to see it.”

Redd said to Carmichael, “Hey, I’ll be right back, man,” and strode out of the shot.

Then we heard the slap and watched as the expression on Carmichael’s face changed from delight to bafflement.

As Redd nonchalantly returned to his seat, he asked Carmichael, “Hey, so where you from, man?”

A shaken Carmichael stammered out his response: “Uh, nowhere, man,” he said.

Redd continued to maintain a conversation with Carmichael while occasionally shouting expletive-laden remarks at the stage.

Soon, the two were joined by Kyle Mooney, playing another seat filler who was oblivious to Carmichael’s nonverbal warnings to stay away.

“Oh my God, we’re right next to Will Smith?” Mooney exclaimed. “I gotta tweet this.” He glanced at his phone: “And he’s trending,” he said as he suddenly became unnerved.

Redd, still buoyant, introduced himself to Mooney and asked, “What’s your name?”

“I don’t — they didn’t give me one,” he replied uncomfortably.

Redd said the past two years had been complicated because Covid, Zoom meetings and — his voice trembling here — “Red Table Talk.”

When Carmichael’s phone rang, he tried to stop it from playing “Gettin’ Jiggy Wit It,” but Redd told him not to switch it off. “Don’t answer that, man!” he said. “Let it ring! Everything is beautiful, y’all!”

Opening Monologue of the Week

At the outset of his monologue, Carmichael made his claim that he wouldn’t discuss the Slap — “Aren’t you sick of talking about it?” he asked the audience — while continuing to reflect on it, without actually describing it or naming its participants.

Though he was excited about the topic at the start of the week, Carmichael said, “By Friday, I made a vow to myself — I promised myself I would never, ever talk about it again.” That changed after Lorne Michaels, the “SNL” creator and executive producer, made a visit to his dressing room, Carmichael said.

“He was like, I think you need to talk about it,” he said. “He said the nation needs to heal.”

Carmichael also talked about his new HBO special, “Rothaniel,” in which he comes out as gay. Reacting to applause from the audience, Carmichael said it was “nice but an expected response in New York.”

In the closing moments of his monologue, Carmichael took the opportunity to address former President Obama. “And unfortunately, I have some news for you, Barack,” he said. “You’re not going to like this. We need you back because I think you’re going to have to talk about it. The nation needs to heal.”

Cold Open of the Week

The leadoff sketch this weekend was a parody of “Fox & Friends” that featured Alex Moffat, Heidi Gardner and Mikey Day as the hosts Steve Doocy, Ainsley Earhardt and Brian Kilmeade; Kenan Thompson and Kate McKinnon as Justice Clarence Thomas and Ginni Thomas; and Cecily Strong as Judge Jeanine Pirro.

The sketch concluded with James Austin Johnson, in his recurring role as former President Trump, who couldn’t resist offering his thoughts on the Slap.

“I did see slap,” Johnson said as Trump. “I enjoyed the slap. I was very impressed by Hitch. Quite an arm on Hitch. I always knew Hitch had an arm.” Still, he said the Oscars had been a sad night: “That kind of behavior is not going to help Kevin James get a date with Allegra Cole, I’ll tell you that,” he explained.

Weekend Update Jokes of the Week

Over at the Weekend Update desk, the anchors Colin Jost and Michael Che continued to riff on — what else? — the Slap.

Intelligence officials are saying that Vladimir Putin is being misinformed by advisers about how badly the Russian military is performing in Ukraine. Which is kind of like Will Smith’s agent telling him, “You crushed it at the Oscars.” Will Smith — for those of you that don’t know — walked onstage during the Academy Awards and slapped Chris Rock after he made a joke about Jada Pinkett Smith. Which I think was a disgraceful act that sets a terrible precedent for having to defend your wife at awards shows.

During his acceptance speech, Will Smith said, “Love will make you do crazy things.” You know what else makes you do crazy things? Crazy. But I understand where Will’s coming from. You can’t expect him to sit there and watch another man jump all over his wife without signing an NDA

Yesterday, Will Smith resigned from the Academy of Motion Picture Arts and Sciences. He wasn’t going to, but then Jada gave him that look. If Will Smith had been, he would have joined a small group of people kicked out of the Academy including Bill Cosby, Roman Polanski and Harvey Weinstein. Or, as they’re also known, “Bad Boys for Life.”

Weekend Update Guest of the Week

Just when it seemed that every celebrity you could think of had commented on the Slap, “SNL” found one with a few more thoughts to share: OJ Simpson, who was played by Thompson in a visit to the Weekend Update desk.

Asked by Che whether he sided with Smith or Rock, Thompson affably responded, “You know me — I hate conflict.” He also claimed not to understand Rock’s reference to “GI Jane.” When it was explained to him that it was a movie from the 1990s, Thompson replied, “The ’90s? Oh, I don’t remember nothing from the ’90s.”