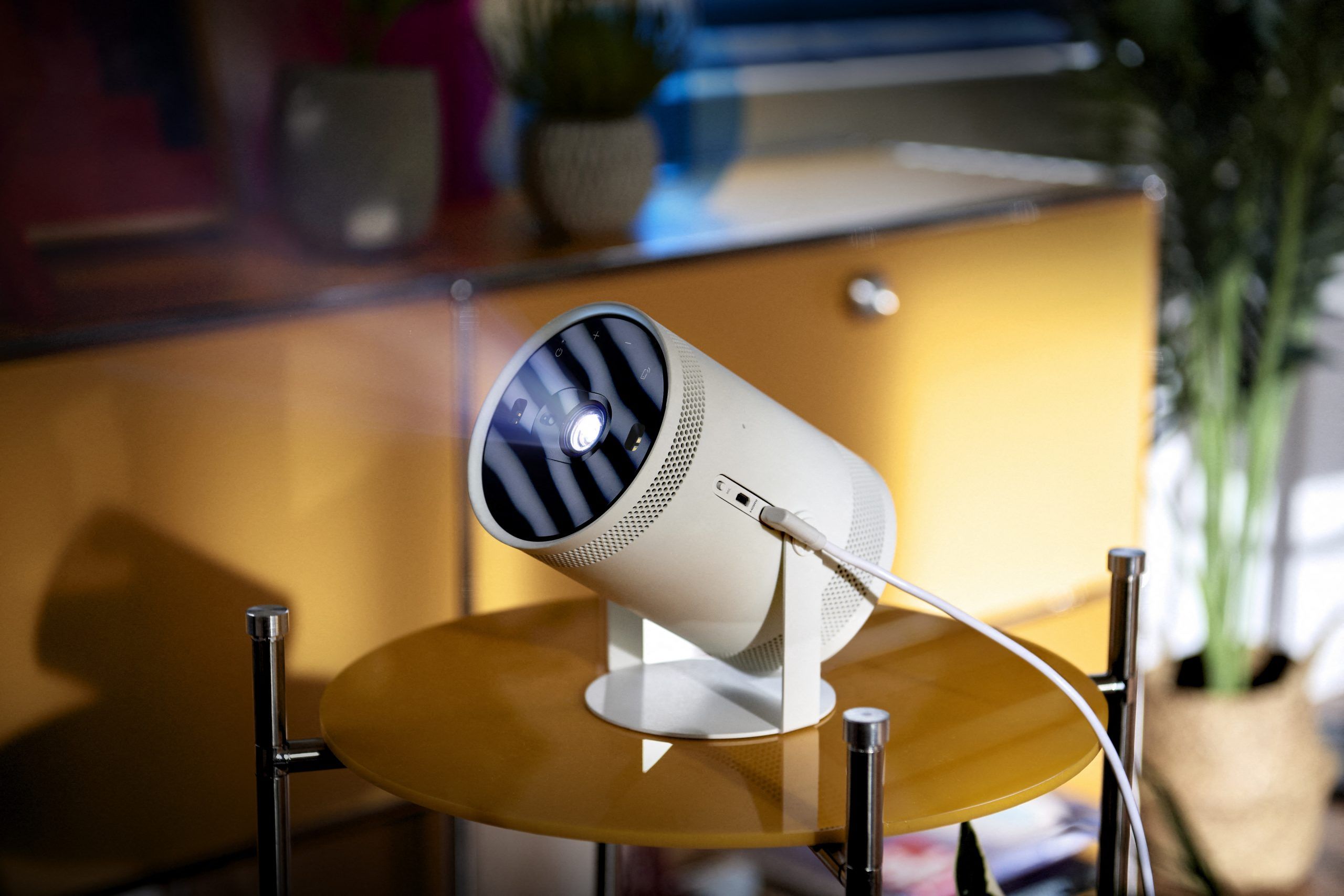 Samsung’s having a pretty big year in mobile tech, with the Galaxy S22 Ultra resurrecting the Note line (in spirit, at least) and the massive Tab S8 Ultra doing its best to redefine our expectations for Android on big screens. But Samsung’s having an equally big year outside of mobile tech — in particular, it’s got a few really interesting new displays available now or coming soon: a desktop monitor, a couple of really cool TVs, and a smart projector. Haven’t seen them? Here’s your chance to catch up.

Samsung’s Freestyle projector might not be an especially practical way for most people to watch movies and TV, but it’s definitely a cool one. The Freestyle is a unique-looking cylindrical projector on a swiveling base that means positioning its image is considerably simpler than it is on a lot of projectors, and it’s got Samsung’s Smart TV UI built in for easy access to content from providers like Netflix and Disney+ . It’s also got a mini-HDMI port on the side, so you can plug just about any source into it. Several enticing accessories are planned for the future, including a battery base and an adapter that lets you screw the thing into a light socket for power.

User reviews haven’t been especially kind — the hardware quality is seemingly not up to snuff for the extravagant $900 Samsung is asking. All the same, I hope we see a second generation that addresses the shortcomings of the first. There’s surely a place in a lot of our lives for a slick, premium smart projector — maybe just not this one in particular.

Samsung is famed for the high-quality OLED panels it uses in its premium phones and tablets, so it may surprise you to learn that, until very recently, the company didn’t offer any OLED TVs to speak of. That changed in March with the reveal of the new S95B, available for pre-order now. And that’s not all: not only is it Samsung’s first OLED TV, it’s actually a QD-OLED TV.

If that outrageous acronym made you roll your eyes, I’m with you. But QD-OLED is a fairly new display type that combines an OLED panel with a layer of quantum dots (yes, that’s a real thing, and no, the term wasn’t coined by Samsung) to improve color and brightness. The result, theoretically, should be some of the best-looking screens on the planet. They’re definitely priced that way: Samsung’s S95B TVs start at $2,200 for the 55-inch model.

Even if you’re not into spending that much on a TV (again, same page there), more manufacturers competing in the OLED TV space means prices should start coming down as companies compete for our dollars.

Samsung’s Frame TVs are designed to look like framed art when you’re not using them. Its new models for 2022 feature a matte finish on their screens, which minimizes glare and reflections to improve the experience both when the TV is playing video content and when it’s idle and displaying art. These aren’t OLED panels, mind you, so the effect won’t be perfect — in dark rooms especially, you’ll be able to tell it’s a TV and not a real painting. But it should look more natural than the glossy models Samsung’s offered in the past.

The matte texture is featured on 2022 Frame TVs and will also be available on upcoming versions of Samsung’s Serif and Sero TVs. The company says the finish was “engineered to maximize light scattering surface irregularities” and “creates the appearance of texture in the art.” That sounds like a bit of a stretch, but I’m still excited at the idea of ​​more matte TVs coming to market. The new Frame TV starts at $1,000 for the 43-inch model.

Samsung announced the M8 smart monitor late last month. There’s really no way around it: built like it is and offered in a handful of pastel colors, the thing looks like an Apple product — somewhere between the newest iMac and the Studio Display. But that’s hardly a bad thing.

The 32-inch M8 has Samsung’s Smart TV interface built in and comes with a USB-C-rechargeable remote, so it can double as a smart 4K TV when you’re not using it with your computer. It’s even got a web browser, so you could do some light work with just the monitor, no computer at all. It also comes bundled with a 1080p webcam with face-tracking that magnetically attaches to the back of the screen.

At $730, it’s definitely a luxury — you can get a 4K screen this size for hundreds less. I also worry that its very-on-trend-in-2022 look will feel dated well before the monitor is obsolete. But if you find you work best in a conspicuously stylish office, this could be one to keep an eye on.

Taylor was a phone nerd long before joining Android Police in 2018. He currently carries a Pixel 6 Pro, which he uses mostly to take pictures of his dogs.