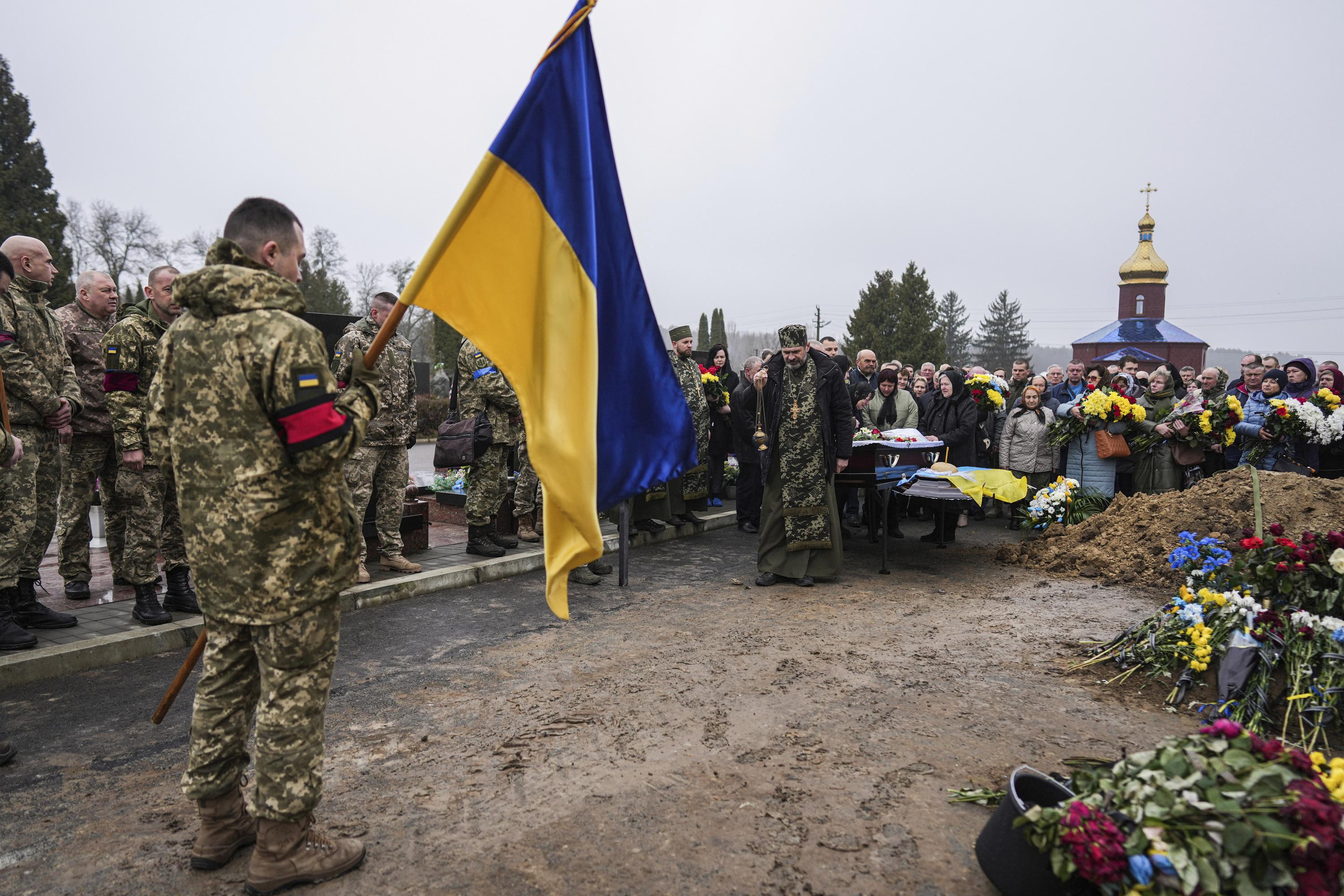 Ukraine’s state power company, Energoatom, said the pullout at Chernobyl came after soldiers received “significant doses” of radiation from digging trenches in the forest in the exclusion zone around the closed plant. The International Atomic Energy Agency said it could not independently confirm the exposure claim.

In what would be the first attack of its kind, if confirmed, the governor of Russia’s Belgorod region accused Ukraine of flying helicopter gunships across the border on Friday morning and striking an oil depot.

The depot run by Russian energy giant Rosneft is located about 35 kilometers (21 miles) north of the Ukraine-Russia border, The helicopter attack set the facility ablaze, and two people were injured, according to a Telegram post by Belgorod governor Vyacheslav Gladkov.

“The fire at the oil depot occurred as a result of an airstrike from two helicopters of the armed forces of Ukraine, which entered the territory of Russia at a low altitude,” the governor wrote on the messaging app.

It was not immediately possible to verify the claim or images that were circulating on social media of the alleged attack. Russia has reported shelling from Ukraine before, including an incident last week that killed a military chaplain, but not an incursion of its airspace.

Elsewhere, Ukrainian forces have retaken the villages of Sloboda and Lukashivka, which are south of the besieged northern city of Chernihiv and located along one of the main supply routes between the city and Ukraine’s capital, Kyiv, according to Britain’s Defense Ministry.

Ukraine has also continued to make successful but limited counterattacks to the east and northeast of Kyiv, the ministry said.

Russian forces have subjected both Chernihiv and Kyiv to continued air and ground-launched missile strikes despite Moscow officials saying Tuesday they planned to reduce military activity in those areas.

western officials said there were growing signs Russia was using its talk of de-escalation in Ukraine as cover to regroup, resupply its forces and redeploy them for a stepped-up offensive in the eastern part of the country.

Ukrainian President Volodymyr Zelenskyy warned that Russian withdrawals from the north and center of the country were just a military tactic to build up strength for new attacks in the southeast.

“We know their intentions,” Zelenskyy said in his nightly video address to the nation. “We know that they are moving away from those areas where we hit them in order to focus on other, very important ones where it may be difficult for us.”

“There will be battles ahead,” he added.

Ukrainian and Russian negotiators planned to resume talks via video on Friday, five weeks into a conflict that has left thousands dead and driven more than 4 million refugees from Ukraine. There seemed little faith that the two sides would find agreement on their respective demands any time soon.

Russian President Vladimir Putin said conditions weren’t yet “ripe” for a cease-fire and he wasn’t ready for a meeting with Zelenskyy until the negotiators do more work, Italian Premier Mario Draghi said after a Thursday telephone conversation with the Russian leader .

Following a plea from Zelenskyy when he addressed Australian Parliament on Thursday, Prime Minister Scott Morrison said that his country would send mine-resistant armored personnel carriers to Ukraine.

He said Friday the four-wheel drive Bushmaster vehicles, specifically requested by Zelenskyy, would be flown to Europe but did not say how many would be delivered or when.

In the encircled strategic port city of Mariupol, Russian forces on Thursday blocked a convoy of 45 buses attempting to evacuate people after the Russian military agreed to a limited cease-fire in the area. Only 631 people were able to get out of the city in private cars, according to the Ukrainian government.

Russian forces also seized 14 tons of food and medical supplies in a dozen buses that were trying to make it to Mariupol, Deputy Prime Minister Iryna Vereshchuk said.

The city has been the scene of some of the worst suffering of the war. Tens of thousands of residents managed to get out in the past few weeks by way of humanitarian corridors, reducing the population from a prewar 430,000 to an estimated 100,000 by last week. But continued Russian attacks have repeatedly thwarted aid and evacuation convoys.

The International Atomic Energy Agency said it had been informed by Ukraine that the Russians forces at Chernobyl had transferred control of the site of the world’s worst nuclear disaster to the Ukrainians in writing. The last Russian troops left Chernobyl early Friday, the Ukrainian government agency responsible for the exclusion zone said.

Energoatom gave no details on the condition of the soldiers it said were exposed to radiation and did not say how many were affected. There was no immediate comment from the Kremlin, and the IAEA said it was seeking more information.

Russian forces seized the Chernobyl site in the opening stages of the Feb. 24 invasion, raising fears that they would cause damage or disruption that could spread radiation. The workforce at the site oversees the safe storage of spent fuel rods and the concrete-entombed ruins of the reactor that exploded in 1986.

Edwin Lyman, a nuclear expert with the US-based Union of Concerned Scientists, said it “seems unlikely” a large number of troops would develop severe radiation illness, but it was impossible to know for sure without more details.

IAEA Director-General Rafael Grossi was in the Russian enclave of Kaliningrad on Friday for talks with senior officials there about nuclear issues in Ukraine.

In addition to concerns about Chernobyl, nine of Ukraine’s 15 operational reactors are currently in use, including two at the Russian-controlled Zaporizhzhya facility, the IAEA said.

Early this week, the Russians said they would significantly scale back military operations in areas around Kyiv and the northern city of Chernihiv to increase trust between the two sides and help negotiations along.

But in the Kyiv suburbs, regional governor Oleksandr Palviuk said on social media Thursday that Russian forces shelled Irpin and Makariv and that there were battles around Hostomel. Pavliuk said there were Ukrainian counterattacks and some Russian withdrawals around the suburb of Brovary to the east.

At a Ukrainian military checkpoint outside Kyiv, soldiers and officers said they don’t believe Russian forces have given up on the capital.

“What does it mean, significantly scaling down combat actions in the Kyiv and Chernihiv areas?” asked Brig. Gen. Valeriy Embakov. “Does it mean there will be 100 missiles instead of 200 missiles launched on Kyiv or something else?”

NATO Secretary-General Jens Stoltenberg said intelligence indicates Russia is not scaling back its military operations in Ukraine but is instead trying to regroup, resupply its forces and reinforce its offensive in the Donbas.

“Russia has repeatedly lied about its intentions,” Stoltenberg said. At the same time, he said, pressure is being kept up on Kyiv and other cities, and “we can expect additional offensive actions bringing even more suffering.”

The Donbas is the predominantly Russian-speaking industrial region where Moscow-backed separatists have been battling Ukrainian forces since 2014. In the past few days, the Kremlin, in a seeming shift in its war aims, said that its “main goal” now is gaining control of the Donbas, which consists of the Donetsk and Luhansk regions, including Mariupol.

Karmanau reported from Lviv, Ukraine. Associated Press journalists around the world contributed to this report.