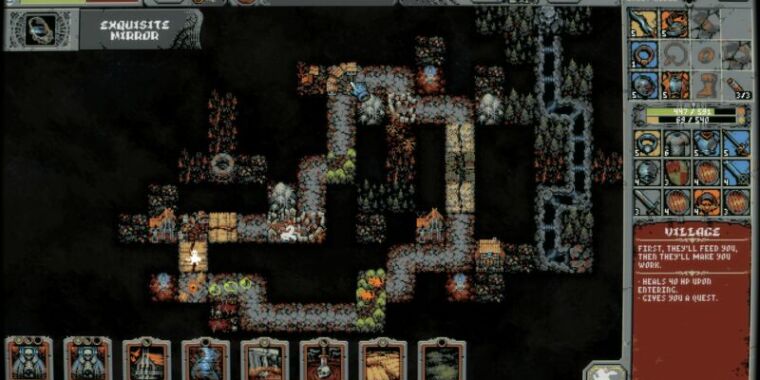 With Russian gamers effectively cut off from purchases on most major gaming platforms due to corporate sanctions against the country, the Russian game developer behind indie darling Loop Hero is encouraging Russian customers to pirate the game.

In a Sunday post on Russian social network VK (Google translated), Loop Hero developer Four Quarters said, “In such difficult times, we can only help everyone to raise the pirate flag (together with vpn)” to get the game. The developer then included a link to a copy of Loop Hero on a popular Russian torrent tracker to aid in that process directly.

In a follow-up post the next day (Google translated version), Four Quarters insisted that “we didn’t do anything special, there’s nothing wrong with torrents.” The company also notes that players wanting to offer the developer donations in lieu of buying the game should refrain. “The truth is that everything is fine with us, send this support to your family and friends at this difficult time,” they wrote.

The Russian government has reportedly mulled legalizing software piracy to get around wide-ranging international corporate sanctions. The Office of the US Trade Representative has called out Russia as the international leader in video game piracy, and local surveys show that pirating cracked versions of games is common in the country.

Near the beginning of Russia’s invasion of Ukraine, Four Quarters posted an anti-war message on its Twitter accounta public stance that comes with some risk, given government statements classifying anti-war protesters as “traitors.”

While players outside of Russia should still be able to purchase Loop Hero on Steam, Valve said earlier this month that banking issues prevented it from sending payments to developers in Russia, Belarus, and Ukraine (ironically enough). Valve recently told PC Gamer that developers in these countries will have to provide “intermediary banking information” in a foreign country to receive the payments they’re due.

“It’s a very frustrating situation, and we hope to find the resolution soon,” Valve wrote in a note to affected developers.