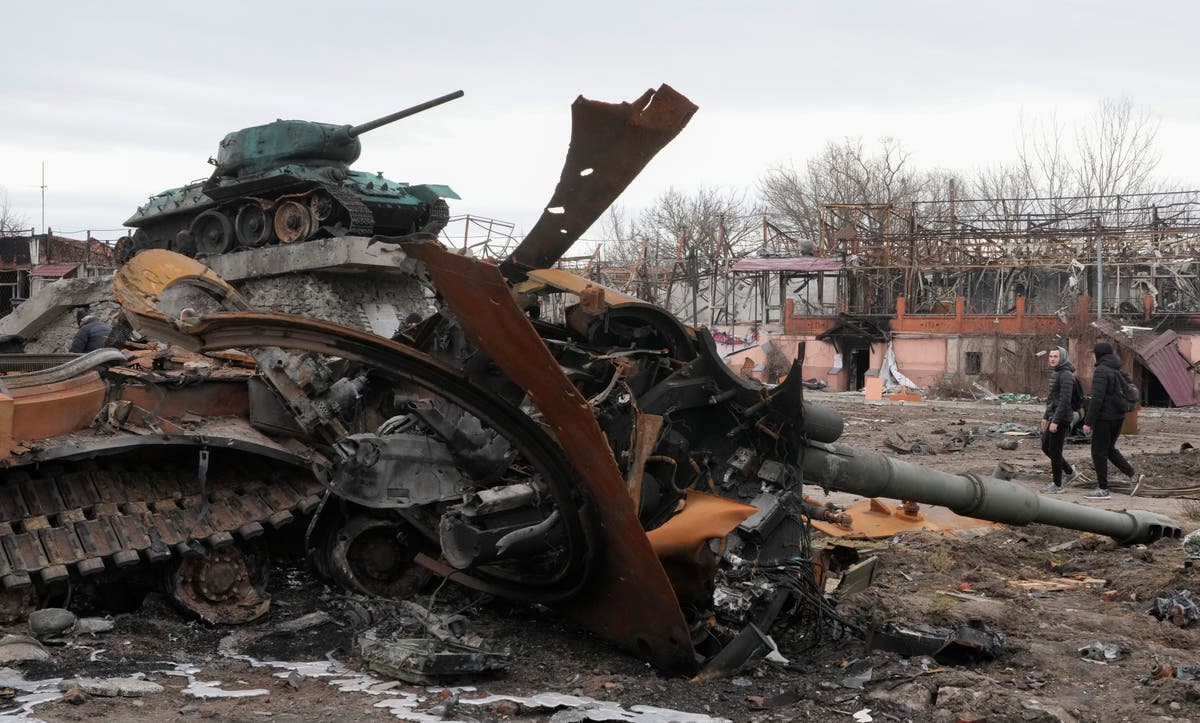 It was one of many episodes from Russia’s invasion of Ukraine in which the entire world was able to follow in granular detail a battle that would have otherwise been shrouded in the fog of war.

Only a month in and Russia’s war against its neighbor may already rank among the most photographed and documented conflicts in recent history. Ukrainian civilians, the military and frontline journalists have all contributed to a mass of real-time visual information by sharing images and video on social media.

Every day, dozens of images of burning tanks, abandoned supply trucks and downed helicopters in Ukraine appear on Twitter, TikTok, Instagram and Telegram. During the first three weeks of the conflict, when Russia’s forces appeared to beset with logistical and fuel problems, videos of Ukrainian farmers towing away abandoned Russian military vehicles seemed to emerge at least one a day – so much so that it became a meme,

That mass of information has allowed open-source intelligence experts and volunteers to gain an insight into this war that might have been available in the past only to state intelligence agencies. They have been able to painstakingly document thousands of images and videos of destroyed and abandoned equipment to tell one of the most important stories of this war so far: the destruction of Russian military equipment on a grand scale, and the stalling of a military superpower.

From open-source data alone – namely images and videos shared online – one team of part-time weapons trackers has documented a total of 2,055 Russian military vehicles destroyed, abandoned or captured by Ukrainian forces. Among that number are 331 tanks, 235 armored fighting vehicles, 313 infantry fighting vehicles and 40 surface-to-air missile systems, according to Oryx Blog, which is run by military analysts Stijn Mitzer and Joost Oliemans. The pair run the tracking operation in their spare time and tweet their discoveries as they go. Any money they make through their Patreon goes to charities that help civilians in Ukraine.

Their list, they add in a preamble, “only includes destroyed vehicles and equipment of which photo or videographic evidence is available. Therefore, the amount of equipment destroyed is significantly higher than recorded here”.

The list tells a story. Long before the Pentagon disseminates news of battles and areas of control in the briefing room, it is possible to determine the outcome of offensives from the documented equipment losses. A destroyed Russian column outside of a town north of Kyiv, where Russian forces were trying to break through, for example, will indicate that their efforts aren’t going too well.

In the first two weeks of the invasion, the volume of the Russian equipment losses documented by weapons trackers was one of the first signs that the operation was not going well for the Russian military. The losses were so great, even, that the team at Oryx became overwhelmed.

“I can’t … keep up,” they tweeted in response to one video that showed Ukrainian forces seizing 30 Russian vehicles near Kharkiv.

Maintaining the list requires almost constant attention – late nights scrolling through backlogs of images and videos to keep it up to date.

“You have to be mad enough to start it, and even madder to keep going,” Mr Mitzer told The Independent.

He added that his team follows a strict methodology for verifying and documenting the videos and images it finds. First they compare it to their existing database to check if it’s new. That process “takes a lot of time and will only become more time-consuming as the number of losses further increases,” he said.

Then they analyze the scene – be it a column of destroyed tanks or an abandoned air defense system – to identify the equipment and figure out how it met its end.

“Ether it’s destroyed, captured or abandoned. Sometimes it ran out of fuel, other vehicles got stuck in a ditch or ambushed by Ukrainian forces,” Mr Mitzer said.

“There’s usually a story to be told, especially when combined with geolocation and after-action reports,” he added.

Rob Lee, a senior fellow at the Foreign Policy Research Institute and former US marine who has also been tracking those videos, said the Russian losses tell us as much about the future of the war as they do the present day.

“At a certain point the losses become so significant that it affects their ability to operate,” he said. “When you can see there is a division’s worth of equipment being lost, or multiple regiments, in one area, the overall operation is going to suffer.”

“It tells you their ability to do certain things offensively in the future is pretty limited, because they probably don’t have the numbers,” he added.

Mr Lee, who is an expert on Russian weapons systems, has been chronicling the open-source data from the battlefield and identifying the damaged or abandoned equipment where he can. He did similar work throughout the war in Syria, but this conflict has provided a much greater amount of source material to work from.

“A lot of war in Ukraine is being fought in very large population centers where people have phones, social media and everything else. We’re gonna see more videos of fighting from those areas than you would elsewhere. So in that regard it is somewhat unique,” he said.

The community of open-source intelligence sleuths that is tracking the equipment losses is a mix of professionals and part-time amateurs. By definition, open-source investigation can be carried out by anyone with an internet connection, so the line between the pros and amateurs is often blurred. Bellingcat, an investigative journalism organization that specializes in open source intelligence, began its life as a one-person operation run by founder Eliot Higgins, and grew into an international behemoth.

Another group, Ukraine Weapons Tracker, has built a 375,000-follower Twitter account in the month since the conflict began. It is run by a team of two people, one of who is an office worker in the UK by day, and who spoke to The Independent on condition of anonymity.

They, too, said the scale of Russian losses has been the most significant finding of their documentation so far. But what also stands out is the level of detail about the way in which the war is being conducted that this small team is able to glean from the images they find.

In the first two weeks of the invasion, large Russian convoys were being wiped out by Ukrainian drone attacks, the volunteer for Ukraine Weapons Tracker said. Images of those burnt-out columns showed Russian military planners were unprepared for a theater in which Russia did not have aerial dominance. Then images of a different kind of destruction began to emerge.

“The Russians decided to reduce the size of their convoys and give them escorts. And instead, those smaller convoys are getting hit by special forces teams or local defense forces,” said the volunteer with Ukraine Weapons Tracker.

“So instead of two massive convoys [being destroyed]you’re getting five or six smaller incidents a day,” they added.

Both Mr Lee and the people behind Ukraine Weapons Tracker have run similar projects in other warzones – primarily Syria and Iraq. But the scale of the equipment losses in Ukraine, most of it Russian, has been unlike anything they have seen before.

“In Syria and Iraq it’s notable if someone captures 10 AK-47s from someone else. Here we wouldn’t even bother touching that, because just the sheer scale you’re talking about. We don’t look at small arms anymore, we just look at armored vehicles,” the volunteer said.

Although the trackers have been monitoring both sides’ equipment, Ukrainian losses have generally been harder to monitor because Ukrainian civilians are less likely to film them.

Even with that potential gap in information, the scale of Russian losses, particularly in the first couple of weeks, was “almost unmanageable” for trackers to fully monitor, said Mr. Lee. That has been revealing in many ways.

“I think contrary to what a lot of people expected, we’re talking about near-peer conflict. Because of that, the scale [of Russian losses] is just huge,” he said.

It’s grim work, all agree. The trackers’ work is to document equipment, but none of them forget that each of those tanks or trucks is operated by a human.

“For every killed soldier you see, a family has been torn apart, a gap created that will never be filled,” said Mr Mitzer. “Footage of a tank that suffers a catastrophic detonation looks impressive, but it also results in the end of three lives. Soldiers that probably never wanted this war. Soldiers that have a family and dreams just like you and me.”