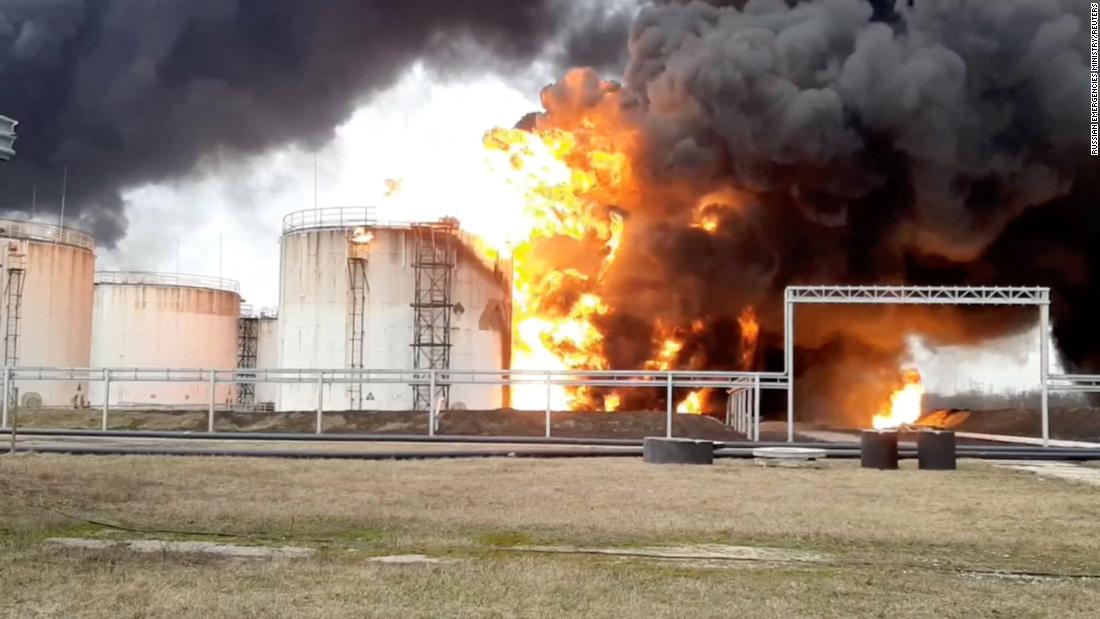 The governor of Russia’s Belgorod region claimed two Ukrainian military helicopters flew across the border at low altitude on Friday morning and struck the fuel storage facility, setting millions of gallons of fuel on fire.

A for Ukraine’s defense ministry declined to comment on the Russian allegations. CNN could not verify the Russian claims.

“I would like to emphasize Ukraine is performing a defensive operation on the Russian aggression on the territory of Ukraine,” Oleksand Motuzyanyk, Motuzyanyk, against Ukraine’s defense ministry said, in a televised statement Friday.

“That doesn’t mean Ukraine has to be responsible for every miscalculation or event or catastrophe that occurred on the territory of the Russian Federation. This is not the first time we are witnessing such allegations. Therefore, I will neither confirm nor deny this information ”

CNN geolocated and verified social media videos showing two helicopters flying over the Russian city of Belgorod, near the Ukrainian border, but cannot confirm the helicopters are Ukrainian.

In one video, they are spotted during an attack on a fuel storage facility. The video, which was shot at a distance of about 1,800 feet (550 meters) from the facility, shows multiple strikes and a subsequent fire in the distance.

About 16,000 cubic meters (3.52 million gallons) of fuel were on fire, encompassing eight tanks with 2,000 cubic meters of fuel each, Russian state media outlet Ria Novosti reported, citing emergency services, and there was the possibility that the fire could spread to another eight tanks.

Two employees of the depot were injured in the fire but their lives were not in danger, Belgorod’s regional governor Vyacheslav Gladkov said on his Telegram channel earlier Friday. Residents in the vicinity of the depot were being evacuated but there was no threat to the population of the city, he added.

Russian President Vladimir Putin has been informed about the alleged strike, Kremlin Dmitry Peskov said Friday, warning that the incident could hinder ongoing negotiations between Kyiv and Moscow.

“The president was informed about Belgorod,” Peskov said in a conference call with reporters. “You know that the ministry of emergency situations was sent there. Steps are being taken to reorganize fuel supply points so that what happened in no case affects the level of supply of all necessary types of fuel.”

The Russian military has claimed air superiority over Ukraine.

“Air superiority during an operation is an absolute fact,” Peskov said. “And as for what happened, it probably should not be us giving out assessments, but our law enforcement agencies.”