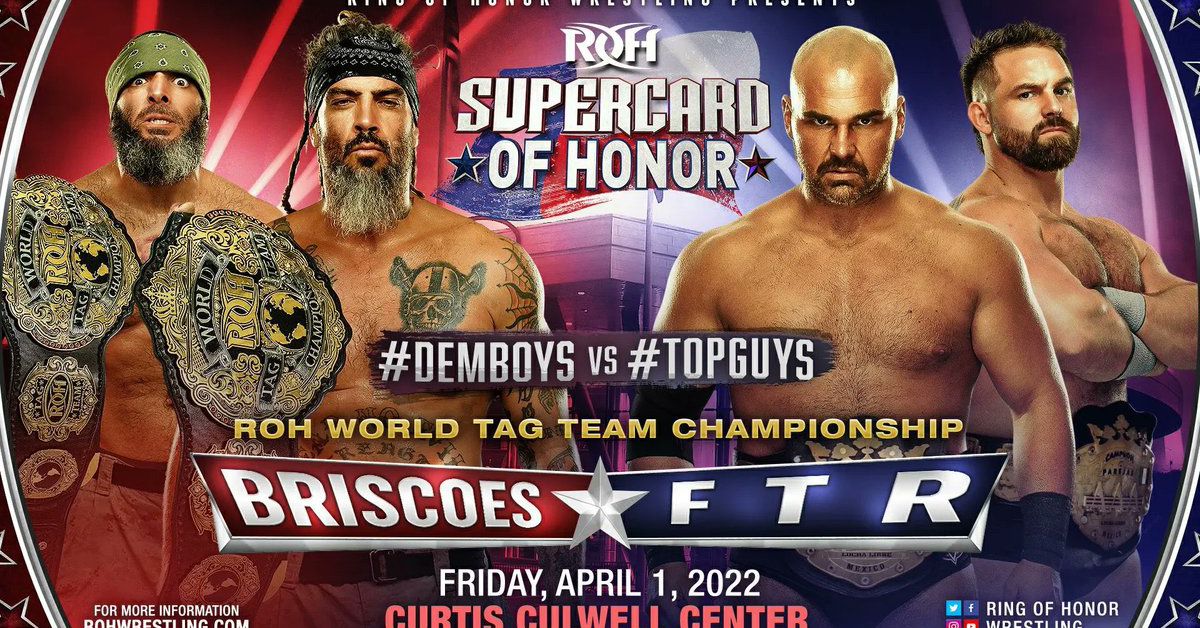 A new era of Ring of Honor is upon under the ownership of AEW head honcho Tony Khan. Supercard of Honor features Friday night (April 1, 2022) fun with a world title unification main event, a tag team dream match, Chavo Guerrero and Tully Blanchard managing new clients, Murder Grandpa, and more. Plus, who knows what surprises are up Khan’s sleeve for the PPV.

ROH Supercard of Honor begins at 8 pm ET with a pre-show at 7 pm ET (that’s embedded above). The broadcast can be viewed through HonorClub, PPV, and Fite TV. Join us for updates and have fun chatting in the open thread.

Ian Riccaboni and Caprice Coleman called the action on commentary.

Colt Cabana defeated Blake Christian. Colt hammed it up to the crowd’s enjoyment. Christian placed Cabana seated on the turnbuckles for a springboard maneuver, but Boom Boom caught him for the Chicago Skyline to win.

Blanchard teased that we will see the third member of TBE later in the show, and we won’t be any less entertained.

Swerve Strickland defeated Alex Zayne. Zayne hit a poison rana off the apron down to the floor then a shooting star press knee drop back inside the ring. Swerve kicked out on the cover. Swerve attacked the knee to slow down Zayne. Swerve was in control for a rolling flatliner then flying double stomp. Zayne kicked out. After a back and forth exchange, Swerve stomped the knee and executed a JML Driver for victory.

Brian Cage defeated Ninja Mack. The Machine wrecked the masked man with strongman moves. Ninja landed a pair of spinning kicks. Cage caught the third to plant Ninja down to the mat and finish with the Drill Claw.