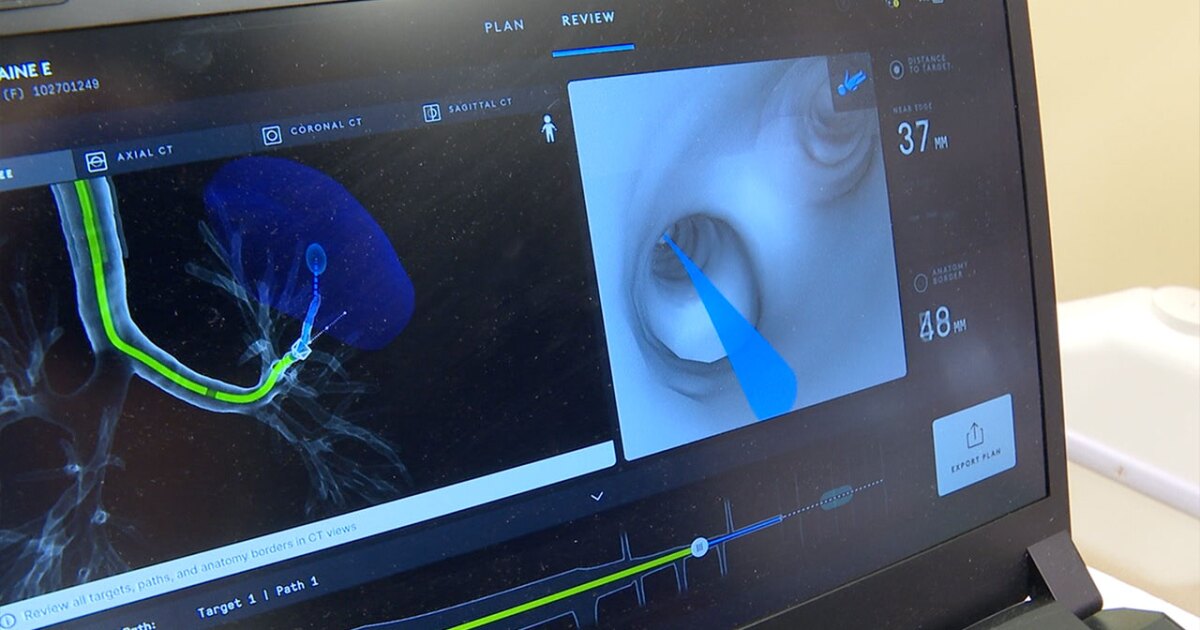 1.6 million Americans hear the terrifying diagnosis of cancer from their doctors every year. For Elaine Healy of Tierra Verde in Pinellas County, it’s a diagnosis she’s received twice.

“It isn’t something you want to hear of course, but I felt blessed that if it is going to be something, let’s get it at stage one and get it out,” she said.

Last year, her doctor, Warren Abel, expressed concern about scar tissue in her lung. He sent Healy to BayCare St. Anthony’s Hospital where doctors were able to use an Ion Robotic System to biopsy her lung.

“It was able to determine that I did in fact have cancer so we proceeded to make a plan,” Healy recalled.

Less than a month later in November 2021, Dr. Vinny Samuel was able to dye mark the cancerous nodule using the robotic system, which helped to guide him through the small passageways in the lung to the cancerous lesion.

“The ion robot has allowed us to reach out further into the lung where we were unable to previously,” Dr. Samuel explained. “Previously it was very difficult to get out to the outer portions of the lung. This is another tool in terms of diagnosing cancer and diagnosing it earlier.”

That same day, and without having to wake Healy up from anesthesia, surgeons used a DaVinci Surgical Robot to remove the cancer. Healy’s operation was just four months ago, but she’s back to her active lifestyle and said she feels great.

“They saved my life,” she said with a smile.

Baycare St Anthony’s Hospital received the new robotic technology in May 2021. Since then, Dr. Samuel has already treated more than 60 patients with it.

Early detection in lung cancer is key. It is the deadliest type of cancer. Less than 25% of people survive five years after their diagnosis, according to the American Lung Association. Yet, Doctor Samuel said if it’s found in stage one, 90% of people will survive.

Healy hopes her second lease on life will encourage others to get lung cancer scans.

“People are frightened. Lung cancer used to equal death but now it doesn’t have to. My mom died at 66 from lung cancer and I know what an impact it had on us, so I’m just thankful that I’m not going to be doing that to my kids,” she elaborated.

The Ion robotic navigation bronchoscopy system uses a CT scan of the patient’s lungs and creates 3-D airway images. After viewing the images, the physician can plan in advance a path to the lesion. The pathway plan is uploaded to the Ion’s controller to guide the physician during the bronchoscopy.

Healy said she credits persistent doctors and enhanced technology in keeping her alive.

“I’m so lucky,” Healy, 59, told BayCare St. Anthony’s Hospital staff. “Dr. Abel was so thorough and determined to get my diagnosis right. Dr. Samuel’s deep knowledge and skill with the new technology enabled him to pinpoint the small lesions. My cancer was caught early enough so that no additional treatment such as chemotherapy or radiation was required. They were able to catch this before Stage 1.”

Dr. Samuel was the first pulmonologist to use the Ion technology in BayCare and helped to bring the Ion system to St. Anthony’s Hospital. After the successful implementation of Ion at St. Anthony’s, the technology expanded to Morton Plant Hospital, another BayCare facility.

Healy said that she would like to see a scan for lung cancer added to annual testing like mammograms or prostate exams. Patients would need to get a referral from their primary care physician to get the testing.