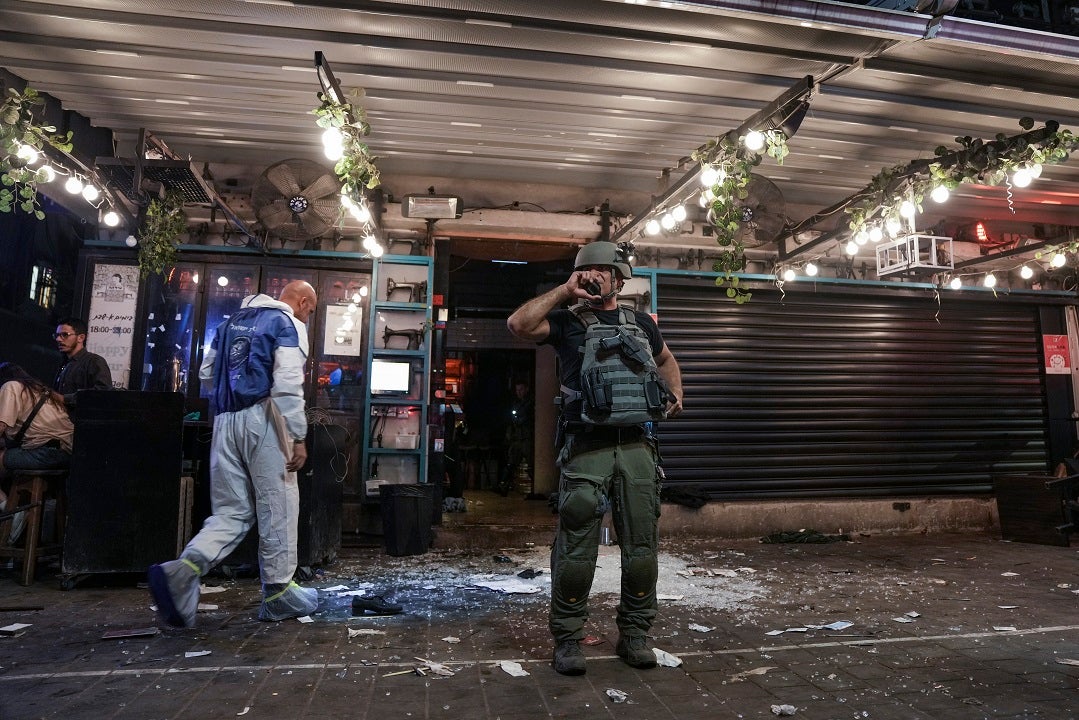 Israeli security forces search for assailants near the scene of a shooting attack in Tel Aviv, Israel on Thursday. Israeli health officials say two people were killed and at least eight others wounded in a shooting in central Tel Aviv. (AP)

International news outlet Reuters is taking major heat over what critics are calling an “evil,” “woeful,” and “appalling” tweet about a Palestinian terror attack against Israelis on a busy Tel Aviv street.

On Thursday, a terrorist opened fire into a crowded bar in central Tel Aviv, killing two and wounding over 10. After killing the gunman in a shootout the Friday morning following the attack, Israeli police identified the suspect as 28-year-old Ra’ ad Fathi Hazem, a Palestinian refugee.

Though people reading a Reuters headline about the terror attack would not have gathered any of those details.

Critics on Twitter heavily admonished the outlet for the headline.

Conservative pundit Dave Rubin pulled no punches. “It is truly extraordinarily how evil the corporate press is,” he tweeted.

Israeli journalist Emanuel Miller called the headline “woeful,” and criticized the outlet for updating their story in the wake of the backlash but leaving the headline unchanged.

He tweeted, “Look closely. @Reuters is coming under criticism for this woeful headline after a Palestinian terrorist shot dead two Israelis last night. The article was updated minutes ago. But the headline has been left untouched.”

Conservative personality Erielle Davidson responded to the tweet, writing, “A Palestinian terrorist kills 2 people and wounds an additional 16, and this is the Reuters headline. Disgusting.”

Daily Caller reporter Brianna Lyman tweeted out her own revision to the offending headline, writing, “Israeli forces shoot dead Palestinian TERRORIST after Tel Aviv bar attack. There, fixed it for you.”

Israeli police inspect the scene of a shooting attack In Tel Aviv, Israel on Thursday. Israeli police say several people were wounded in a shooting in central Tel Aviv. The shooting on Thursday evening occurred in a crowded area with several bars and restaurants. (AP Photo/Ariel Schalit)
(AP)

Columnist Frida Ghitis tweeted that Reuters’ was “astonishing” and “appalling,” writing, “this is an astonishing headline to describe the aftermath of a terrorist attack. The murderer was fleeing after killing two people and injuring several others. Unbelievable, @reuters . Appalling.”

Tablet Magazine CTO Noam Blum revised the headline as well, tweeting, “Palestinian terrorist who gunned down civilians at a Tel-Aviv bar killed after manhunt and gunfight with Israeli security forces.”

“There. Did your job for you, international media,” he added.