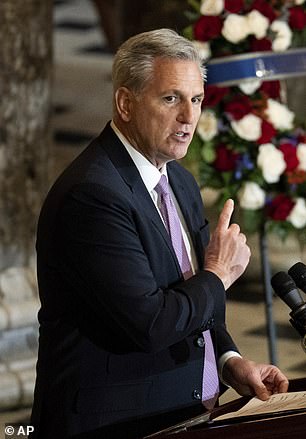 In comments first made to DailyMail.com, the Minority Leader pledged the GOP would ‘focus on real solutions to lower gas prices’ and attacked the president’s ‘political ploy’ to combat the crisis, which was exacerbated by Russian President Vladimir Putin’s brutal and unprovoked invasion of Ukraine last month.

Washington Democrats that continue to oppose American energy are weakening our country. President Biden has spent 14 months indulging the wishes of liberal activists over the well-being of families. It has been a total disaster,’ McCarthy said.

‘Now, Biden lacks the common sense to dismantle his own policies that have hampered our domestic energy production. Instead, he is trying to divert attention by releasing another 180 million barrels from our emergency Strategic Reserves as a political ploy.’

It comes after the president unveiled measures to combat what he’s dubbed ‘Putin’s price hike’ at the White House on Thursday afternoon.

Biden’s plan includes a historic release of one million barrels of oil per day for the next six months from the country’s strategic reserves, calling it a ‘wartime bridge’ to easing gas prices in his remarks.

‘The Strategic Petroleum Reserve is already at a 20-year low. Biden’s superficial, shortsighted stunt will cripple our future readiness and will not deliver relief from souring prices,’ McCarthy said.

‘If Americans entrust House Republicans with the majority, we will focus on real solutions to lower gas prices, not ridiculous political spin that won’t solve our energy crisis.’

Gas prices in the US have reached record-highs since troops from Russia, one of the world’s largest energy exporters, attacked Ukraine in late February.

The national average gas price is roughly $4.23, slightly below the all-time high of $4.33 hit just weeks ago. 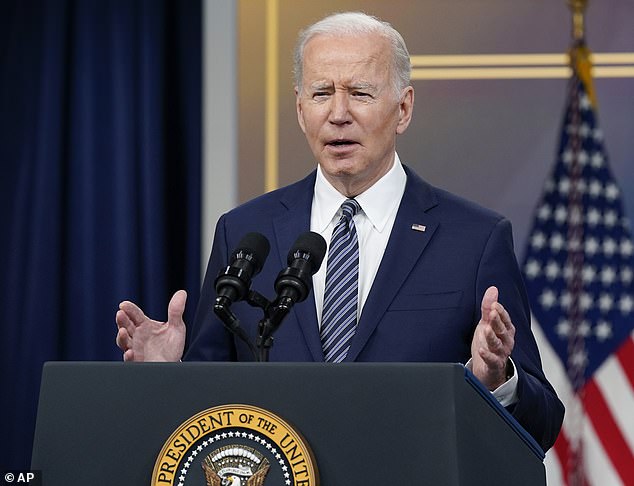 In McCarthy’s native California, prices at the pump reached a statewide average of $5.91 earlier this week — the highest ever recorded, according to AAA.

Much of Southern California, including Los Angeles County, are still seeing prices above $6 on Thursday.

The Biden administration has defended against Republican calls to ramp up domestic oil and gas production by blaming energy companies that currently have a combined 9,000 un-used drilling leases on federal land.

Rather than opening up more land for oil and gas production, however, Biden on Thursday urged Congress to fine companies who are sitting on the unused land already allocated to them.

He dubbed it a ‘use-it-or-lose-it’ plan in his White House remarks.

Big oil has reported record-breaking profits this month despite the pain felt by consumers across the country.

Still, a number of Republican lawmakers told DailyMail.com, that will not be enough.

‘President Biden is covering for his own self-made energy crisis. This is the third release of oil from the Strategic Petroleum Reserve in under a year. Since day one, Biden has waged war on American energy by killing the Keystone pipeline, halting oil and gas leases, and increasing burdensome regulations on fossil fuels,’ Cruz told DailyMail.com.

‘Just like the Biden administration wants to spend their way out of inflation, this is a desperate political stunt that will shift costs onto working families,’ Banks said.

Congressman Troy Nehls (R-Texas), whose state is one of the largest energy producers in the country, accused the president of cow-towing to progressive ‘Green New Deal’ advocates in refusing to lease new land for oil drilling and gas pipelines. 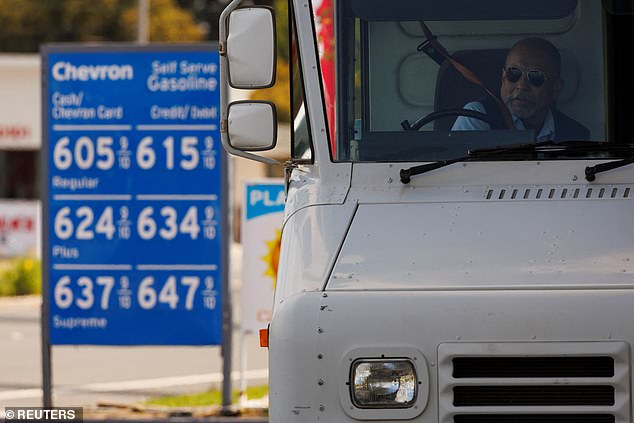 Meanwhile prices at the pump have reached record-highs this month, while US oil companies announced nearly $800 billion in profits last year

‘Our strategic reserve should only be used for national security crises. If President Biden wants to lower energy prices, he should stop forcing green new deal policies down the throats of Americans and unleash American energy by approving new oil leases and pipeline projects,’ Nehls said.

‘I’ve advocated for increased domestic energy production long before Russia invaded Ukraine, and now American taxpayers are feeling the ripple effects of a conflict on the other side of the globe. The sad reality is that we’ve lost our energy independence and we’re now at the mercy of totalitarian regimes to keep energy affordable here in the US,’ Upton said.

‘In order to control energy and gas prices, we need to reclaim our energy independence through real policy changes, not a band-aid solution like accessing the Strategic Petroleum Reserve.’

Rep. Dan Bishop (RN.C.) cited former President Trump’s March 2020 announcement that he would fill the country’s crude oil reserves ‘to the top’ in an effort to take advantage of the time’s low gas prices.

‘Instead of using up all of our strategic oil reserves that President Trump rebuilt, Biden needs to unleash America’s energy production capabilities. Biden sacrificed our energy independence to appease his ‘woke’ base and now Americans are feeling the pain of his poor decisions,’ Bishop said.

The North Carolina congressman was one of eight lawmakers to vote against legislation to revoke normal trade relations with Russia over its invasion earlier this month.

At the time, Bishop had released a statement saying he was against Congress ‘irresponsibly granting limitless and interminable power’ to the Executive Branch with the bill.

During his Thursday speech Biden also renewed calls to speed up the transition to renewable energy, urging the US to ‘choose long term security’ over ‘energy and climate volatility.’

‘We need to double-down on our commitment to clean energy and tackling the climate crisis,’ the president said.