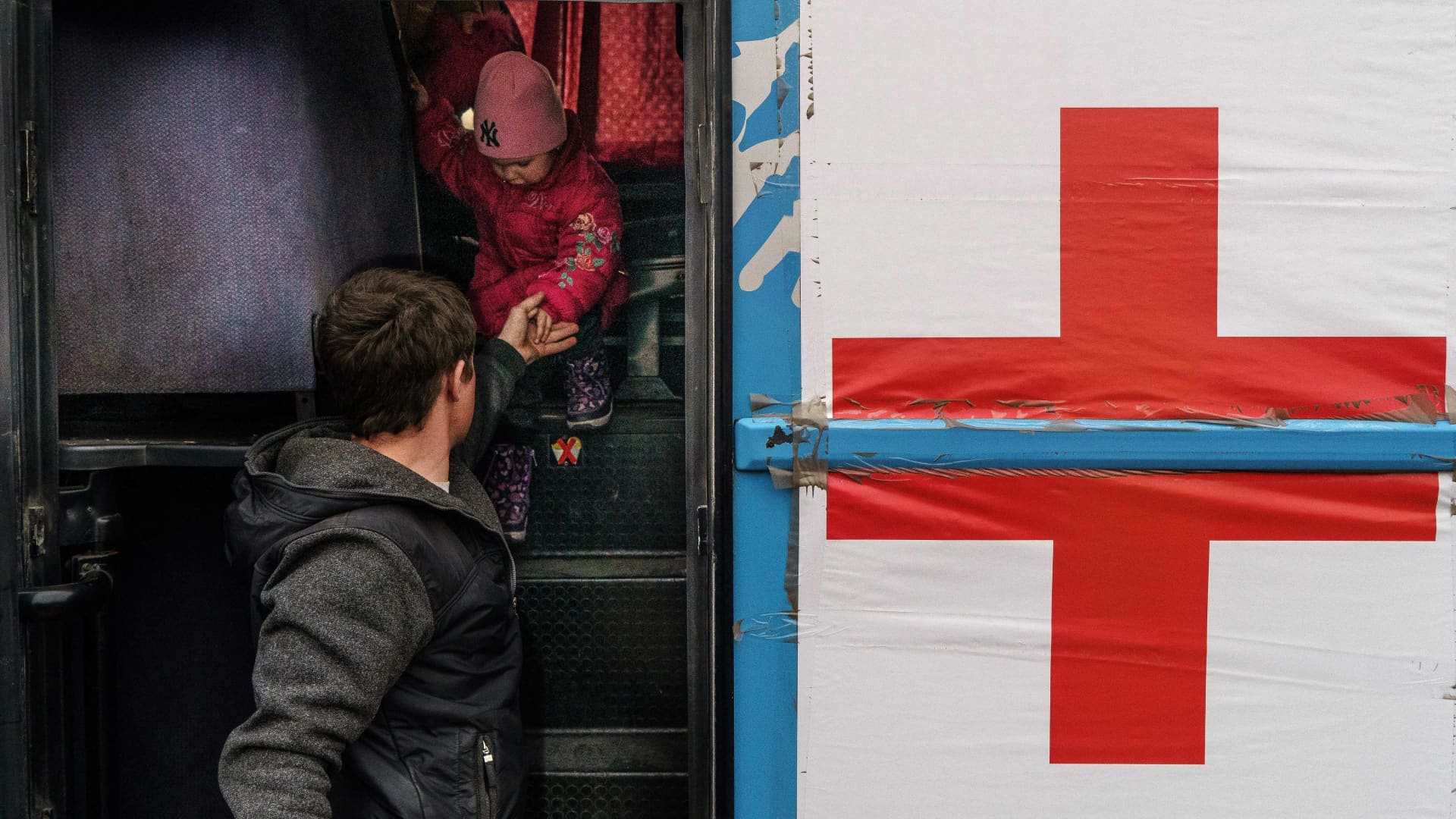 Ukraine’s Deputy Prime Minister Iryna Vereshchuk said seven humanitarian corridors to evacuate people from besieged areas of the country are planned for Saturday, according to Reuters.

The planned corridors reportedly include one for people evacuating by private transport from the city of Mariupol and by buses for Mariupol residents out of the city of Berdyansk, Vereshchuk said.

A child is helped off a bus by humanitarian workers at the registration center in Zaporizhzhia, Ukraine.

A team of humanitarian workers from the Red Cross on Saturday will try again to reach Mariupol, aiming to facilitate the safe passage of citizens from the besieged port city.

A convoy was unable to reach the southeastern city on Friday, citing “impossible” arrangements and conditions.

“They will try again on Saturday to facilitate the safe passage of civilians from Mariupol,” the International Committee of the Red Cross said in a statement.

“For the operation to succeed, it is critical that the parties respect the agreements and provide the necessary conditions and security guarantees,” they added.

Ukraine President Volodymyr Zelenskyy has said the withdrawal of Russian forces in the north of the country is “slow but noticeable” and warned citizens that “difficult battles” are still to come as Russia’s onslaught persists.

In a Saturday morning video address delivered via Telegram, Zelenskyy also said Russian troops were creating a “complete catastrophe” as they withdraw from the territory by laying mines in houses, on equipment and on corpses. CNBC has not been able to independently verify this report.

“In the north of our country, the withdrawal of the occupiers continues. Slow but noticeable. In some parts, they are being fighting, in other parts they are leaving their positions themselves,” Zelenskyy said, according to a translation.

“We have difficult battles ahead. It is still impossible to think that we have already passed all the tests. We all want to win. But when it will be – everyone will see it. Everyone will feel that peace is coming.”

A child is helped off a bus by humanitarian workers at the registration center in Zaporizhzhia, Ukraine.

Ukrainian forces continue to advance against withdrawing Russian forces in the vicinity of Kyiv, according to British military intelligence.

Russian forces are also reported to have withdrawn from Hostomel Airport near Kyiv, which has been subject to fighting since the first day of the conflict, Britain’s Ministry of Defense said.

“In the east of Ukraine, Ukrainian forces have secured a key route in eastern Kharkiv after heavy fighting,” the ministry said. CNBC could not immediately verify the report.