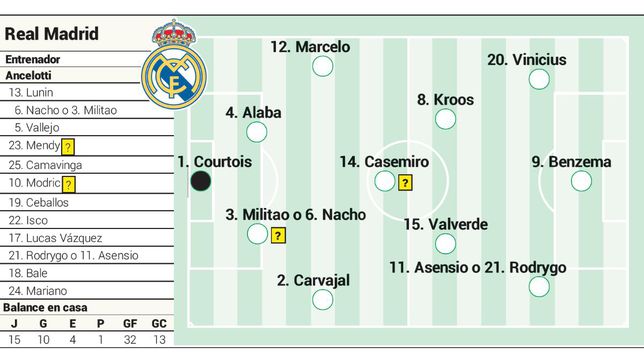 With the Champions League second leg against Chelsea loomingCarlo Ancelotti has a lot going through his mind, but will no doubt be remaining came after the euphoria of Stamford Bridge.

AS understands that the Italian is likely to field a strong team against an improving Getafe at the Santiago Bernabéu on Saturday, Madrid will look to go ahead early and rest key players as the game evolves. On Friday, Ancelotti revealed that Eder Militao is ready to play and that Ferland Mendy is likely to miss out. The ever-reliant Nacho is available to come in as is veteran full-back Marcelo, who hasn’t started for almost two months.

After a terrific performance in the 3-1 win over Chelsea In London, Fede Valverde could replace Luka Modric or Toni Kroos in the engine room, with Rodrygo or Marco Asensio occupying the right wing role. Karim Benzema has been involved in 50 goals in all competitions this season and is irreplaceable in attack. The Frenchman has scored 10 of Madrid’s last 12 goals and has now scored in five consecutive LaLiga games. Dani Ceballos, who has seen very little game time this season is likely to feature. Gareth Bale is also expected to get minutes at the Bernabéu, in his last few games for the club.

Getafe will be without midfielder Mauro Arambarri for the clash. The Uruguayan has been absent on six occasions in the league this season, leading to five defeats and a draw. Spanish midfielder Gonzalo Villar could come into the fold in the midfield berth. It is also likely that scar will play as the second striker in place of Sandro. Getafe have only scored in two of their previous 15 visits to the Bernabéu and have lost in eleven consecutive seasons.

Los Azulones beat Madrid three months ago with just 26 percent possession. Manager Quique Sánchez Flores has changed their fortunes around and they have picked up much-needed points thanks to a more organized defensive setup and an in-form striker in Enes nal.

After nal, the six most valuable players in the team, according to Olocip data, are goalkeeper David Soria, two full-backs (Suárez and Olivera) and three centre-backs (Cuenca, Mitrovic and Djené). Their solidity at the back has made them a difficult team to break down, and they have collected a respectable 31 points in Quique’s 22 games in charge.

Since the Spanish coach arrived, Getafe are eighth in the points standings and have only conceded more goals than Madrid and Sevilla, Despite nal’s impressive tally of 14 goals, they produce the third fewest chances in the league and have the second lowest possession (43 percent). The five winter signings, especially Borja Mayoral, who has scored four goals, two of them coming off the bench, have helped Getafe turn their season around. They’re now six points clear of the relegation zone.

Militao, Mendy, Casemiro and Modric are all one game away from suspension and will miss Sunday’s game against Sevilla if they are cautioned by referee Soto Grado.