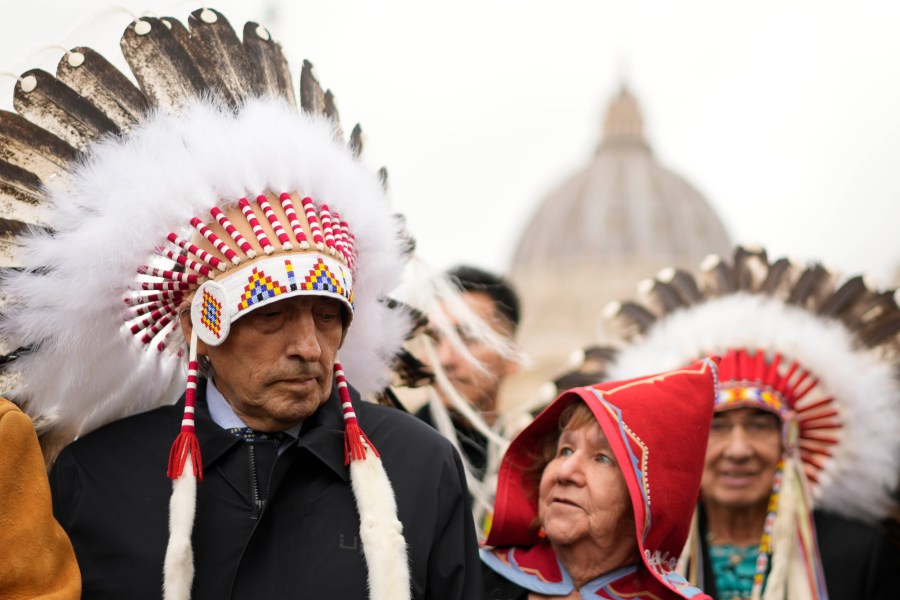 VATICAN CITY (AP) — Pope Francis apologized and begged forgiveness Friday for the “deplorable” abuses suffered by Indigenous Peoples in Canada’s residential schools, saying he was ashamed and indignant at all they had endured at the hands of Catholic educators.

Francis made the apology and vowed to visit Canada during an audience with dozens of members of the Metis, Inuit and First Nations communities who came to Rome seeking a papal apology and a commitment for the Catholic Church to repair the damage.

More than 150,000 native children in Canada were forced to attend state-funded Christian schools from the 19th century until the 1970s in an effort to isolate them from the influence of their homes and culture. The aim was to Christianize and assimilate them into mainstream society, which previous Canadian governments considered superior.

“For the deplorable conduct of those members of the Catholic Church, I ask forgiveness of the Lord,” Francis said. “And I want to tell you from my heart, that I am greatly pained. And I unite myself with the Canadian bishops in apologizing.”

The trip to Rome by the Indigenous was years in the making but gained momentum last year after the discovery of hundreds of unmarked graves outside some of the residential schools. The three groups of Indigenous met separately with Francis over several hours this week, culminating with Friday’s audience.

Francis spoke in Italian and it wasn’t immediately clear if the audience understood what he had said, though he stood and applauded after he finished.

And the audience continued on with joyous performances of Indigenous prayers, drum, dance and fiddlers that Francis watched, applauded and at one point gave a thumbs up to. The Indigenous then presented him with gifts, including snow shoes.

The head of the Metis, Cassidy Caron, presented Francis with a bound book of their people’s stories: Much of what the Indigenous sought to accomplish during their meetings this week was to tell Francis the individual stories of loss and abuse that they suffered.

The Canadian government has admitted that physical and sexual abuse was rampant at the schools, with students beaten for speaking their native languages. That legacy of that abuse and isolation from family has been cited by Indigenous leaders as a root cause of the epidemic rates of alcohol and drug addiction on Canadian reservations.

Nearly three-quarters of the 130 residential schools were run by Catholic missionary congregations.

Last May, the Tk’emlups te Secwepemc Nation announced the discovery of 215 gravesites near Kamloops, British Columbia, that were found using ground-penetrating radar. It was Canada’s largest Indigenous residential school and the discovery of the graves was the first of numerous, similar grim sites across the country.