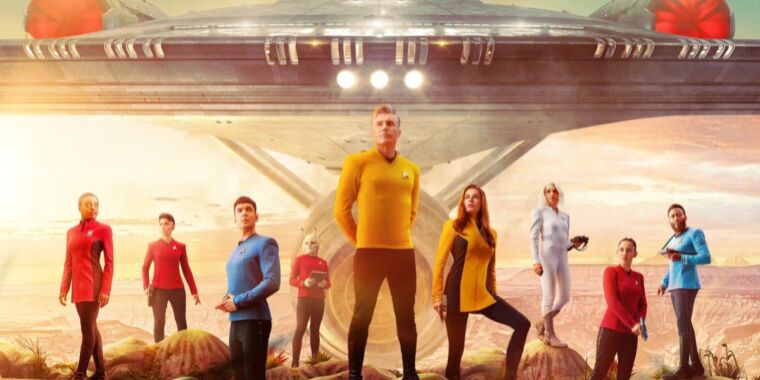 Interplanetary adventures, political intrigue, and a spot of romance are in store for the crew of the USS Enterprise in the official trailer for Star Trek: Strange New Worlds, The spinoff prequel series debuts on Paramount+ next month.

The brief teaser that dropped last month opened with a bearded and possibly retired Pike surveying his ranch from horseback. (A retired Pike is consistent with the TOS episode “The Cage:” we first meet Pike as he is debating leaving from Starfleet.) Then a small spacecraft zoomed past, and we caught tantalizing glimpses of the titular strange new worlds as a voice called Pike back to action.

The new official trailer opens with Pike beaming into what appears to be a bitter dispute between two alien facts. The aliens don’t seem to be expecting him, given his awkward reception (“Hi… sorry to interrupt”). We see crew members beaming down to the surface of a comet and encountering a large glowing golden egg-shaped structure.

“If you want to seek out new life, go where the aliens are,” Pike tells us. But that alien life might not be receptive to first contact, as Pike and the Enterprise find themselves under fire by aliens who consider their presence to be “blasphemy.” And romance blooms for both Pike and Spock (separately, not with each other).

Ars Technica may earn compensation for sales from links on this post through affiliate programs.