Palin files paperwork to run in Alaska US House race 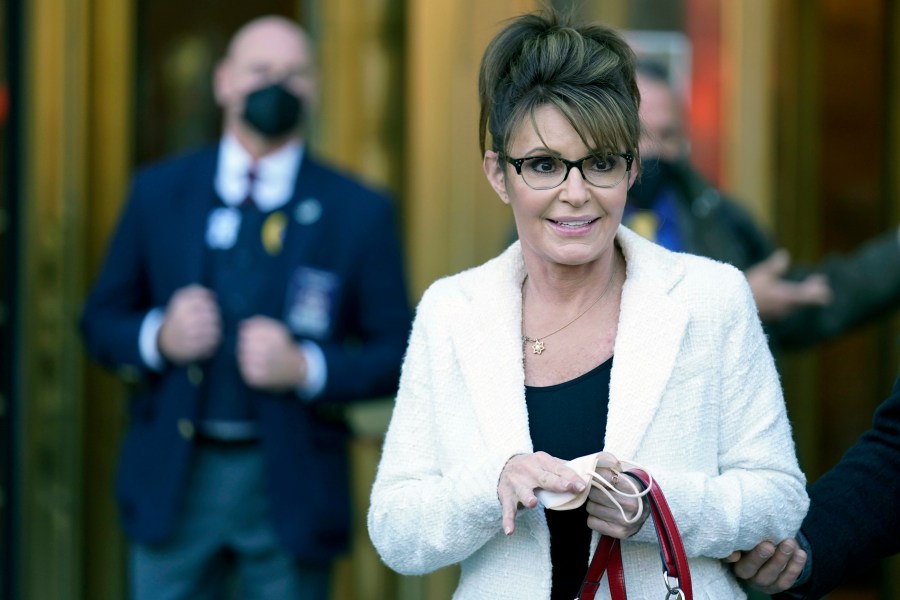 JUNEAU, Alaska (AP) — Sarah Palin on Friday shook up an already unpredictable race for Alaska’s lone US House seat, filing paperwork to join a field of at least 40 candidates seeking to fill the seat that had been held for 49 years by the late -US Rep. Don Young, who died last month.

Palin filed paperwork Friday with a Division of Elections office in Wasilla, said Tiffany Montemayor, a division spokesperson. The paperwork was being processed by the division, she said.

The field includes current and former state legislators and a North Pole city council member named Santa Claus. The deadline to file was 5 pm Friday. A final list of official candidates was not yet available.

“Public service is a calling, and I would be honored to represent the men and women of Alaska in Congress, just as Rep. Young did for 49 years,” Palin said in a statement on social media. “I realize that I have very big shoes to fill, and I plan to honor Rep. Young’s legacy by offering myself up in the name of service to the state he loved and fought for, because I share that passion for Alaska and the United States of America.”

Palin is a former Alaska governor and was the 2008 Republican vice presidential nominee. She has kept a low profile in Alaska politics since leaving office in 2009, before her term as governor ended.

Young, a Republican, had held Alaska’s House seat since 1973 and was seeking reelection at the time of his death last month at age 88.

A special primary is set for June 11. The top four vote-getters will advance to an Aug. 16 special elections in which ranked choice voting will be used, a process in line with a new elections system approved by voters in 2020.

The winner will serve the remainder of Young’s term, which expires in January. The division is targeting Sept. 2 to certify the special election.

Others who filed Friday include Republican state Sen. Josh Revak; Democratic State Rep. Adam Wool; independent Al Gross, an orthopedic surgeon who unsuccessfully ran for US Senate in 2020; and Andrew Halcro, a former Republican state lawmaker who is running as an independent. They join a field that includes Republican Nick Begich, who had positioned himself as a challenger to Young; Democrat Christopher Constant, an Anchorage Assembly member; and John Coghill, a Republican former state lawmaker.

Revak, who previously worked for Young’s office and was a statewide co-chair for Young’s reelection bid, said he felt a “strong calling and a duty” to step forward.

He said he was “heartbroken” by the filing timeline, coinciding with a period he said should be focused on remembering Young.

Young lied in state at the US Capitol on Tuesday. A public memorial was held in the Washington, DC-area on Wednesday and a public memorial is planned in Anchorage on Saturday.

Gross also plans to run in both the special and regular elections. His campaign announced a leadership team that includes several Republicans and independents, as well as Democrats, including former Gov. Tony Knowles.

“We are building a campaign that embodies all of Alaska,” Gross said in a statement.

Wool said he has privately discussed a run for years. He said he looked at the candidates running in the special primary and “wasn’t that impressed. Many of them have never won an election, don’t have any statewide recognition and politically aren’t aligned certainly not with me or what I would think the majority of Alaskans are looking for.”

Wool, from Fairbanks, said he considers himself moderate. He said he has yet to decide whether to run in the regular primary.

Halcro, who has a podcast on which he talks politics, said during the campaign he plans to play up his intent to only run to fill the remainder of the term. He said if the person who wins the special election also is in the November general election, he expects they would spend a fair amount of time campaigning. He said if elected, he would be focused on congressional work.

Meanwhile, a man who years ago legally changed his name to Santa Claus and serves on the North Pole city council also filed with the state Division of Elections for the special primary. Claus, who said he has a “strong affinity” for Bernie Sanders, is running as an independent.

He said he is not soliciting or raising money. He said the new elections process “gives people like me an opportunity, without having to deal with parties, to throw our hat in the ring.”

“I do have name recognition,” he said with a laugh.