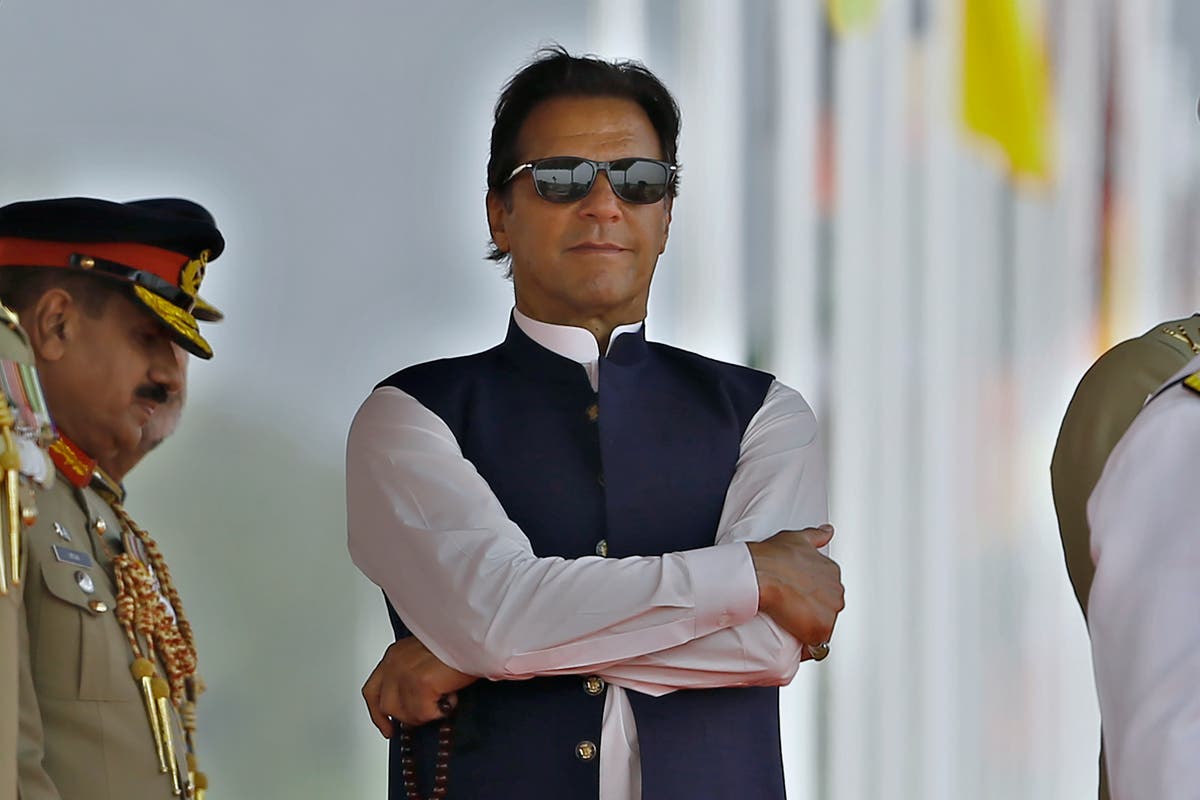 Pakistan’s prime minister Imran Khan on Thursday said he won’t resign from his position despite losing the majority in the national assembly, and insisted that he was ready to face the no-confidence motion scheduled for Sunday.

In an address to the nation, Mr Khan, 69, said he “will play till the last ball” — a reference to his former cricketing career — and added that the no-confidence vote will decide the country’s future.

“When I played cricket for 20 years, the world and those who played cricket with me saw that I played till the last ball. I’ve never accepted defeat in life,” he said. “Nobody should think that I will sit at home. I’ll face the trust vote on Sunday and come back stronger, whatever may be the result.”

He alleged that a “threat letter” had shown evidence of a “foreign conspiracy” trying to topple his coalition government.

Though he initially named the US as the country behind this threat, he later claimed it was a slip of the tongue.

Mr Khan pulled out a piece of paper from his pocket at a public rally, and waved it at the crowd, claiming that it was evidence of the “international conspiracy”.

“On 8 March or before that on 7 March, the US sent us a…not the US but a foreign country sent us a message. The reason why I am talking about this…for an independent country to receive such a message… this is against me and the country,” Mr Khan said.

Mr Khan told reporters that “the language of the letter was threatening and arrogant”, and that Pakistan would face dire consequences if the no-trust motion failed. However, Dawn reported that he did not show the contents of the letter to the media.

He added: “I want the country to see who all will sell their conscience [on the day of the no-confidence vote]” referring to the rebel legislators from his party, the Pakistan Tehreek-e-Insaf (PTI).

The US state department, meanwhile, said “there is no truth to these facts”.

Mr Khan has been facing mounting criticism over his performance, especially his handling of the country’s economy amid concerns of a record increase in inflation and rising deficits. The former cricket star, who was voted into power with a promise of acting against corruption, has lost key allies in a matter of weeks.

The Pakistan Tehreek-e-Insaf, faces a challenge from the joint front formed by two opposition parties, the Pakistan Peoples Party (PPP) and the Pakistan Muslim League-N (PML-N).

The last nail in the coffin for Mr Khan was when his key ally Khalid Maqbool Siddiqui, the leader of Muttahida Qaumi Movement (MQM), announced that his party was joining the opposition seeking to oust him.

Robbed of his majority, Mr Khan only holds 164 votes out of the needed 172 to continue as prime minister and emerge out of this political crisis. The opposition is ready with a new candidate, Shahbaz Sharif, for the job, and says it has the support of 175 lawmakers.