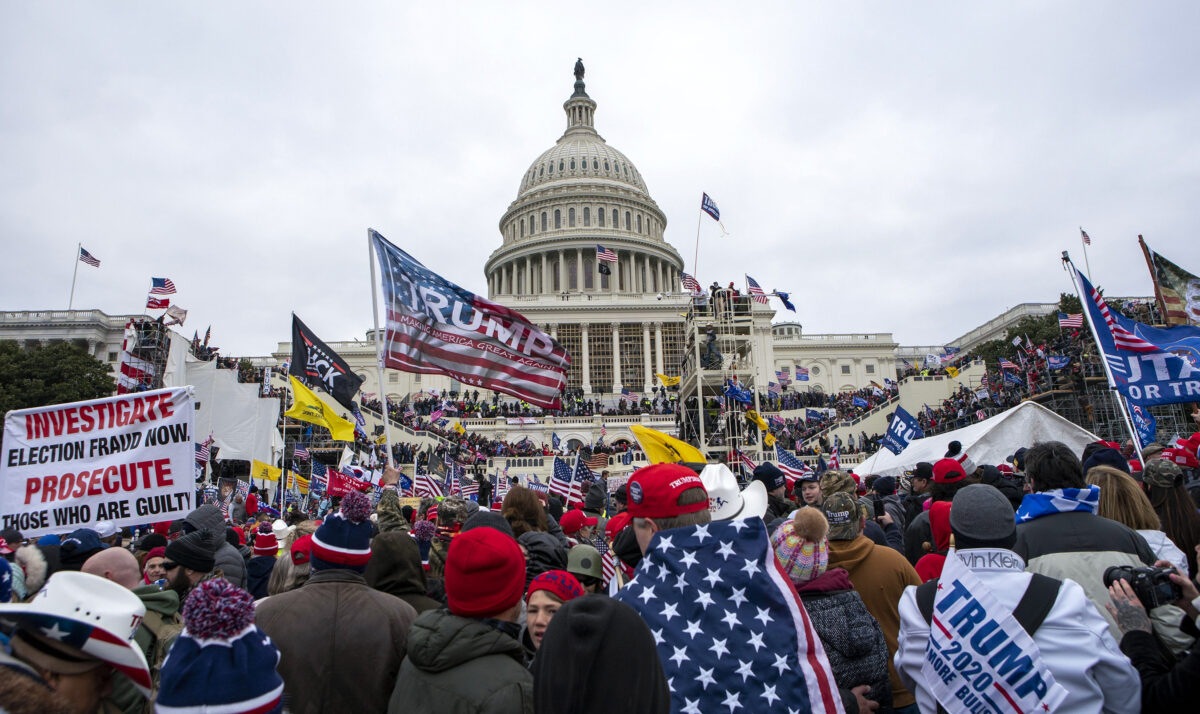 Five defendants to be tried July 11, the other five Sept. 26

The seditious conspiracy case against 10 members and associates of the Oath Keepers will be split into two trials — one in July and the other in September — U.S. District Judge Amit P. Mehta ruled Friday.

The Oath Keepers are charged with seditious conspiracy and other crimes for allegedly developing and carrying out a plan to attack the Capitol on Jan. 6, 2021, to impede or prevent the certification of Electoral College votes from the 2020 presidential election. All 10 defendants have pleaded not guilty.

In a status hearing in U.S. District Court in Washington DC, defense attorneys argued that their clients should be tried as a group, but Mehta said such a large gathering would be a logistical impossibility in the United States Courthouse.

‘Having Two Trials May Be Unfair’

“To bifurcate the trial does cause problems with the defendants,” said Phillip Linder, attorney for Rhodes. “I think having two trials may be unfair to some of the defendants, whether they’re in the first group or the second group, for a myriad of reasons.”

Mehta replied: “Id like to try this case one time too. But somebody needs to tell me where I can have a case where it’s 11 defendants with their counsel and government counsel, they fit into one room with a jury, and have such a case be tried. ”

The judge said he does not believe the US Marshals would like the idea of ​​setting up a trial in the convention center.

“I do not know how I could even do it,” he said. “I’m open to the idea of ​​trying 11 defendants at once, but I do not know where it could happen.”

Mehta interrupted, “You’re going to get a fair trial, it just may not be all at once.”

Mehta bristled at complaints from defense attorneys about the prosecution’s pace in turning over exculpatory evidence, suggesting they focus their efforts on relevant evidence and not try to view every video put on the server by the Department of Justice.

“I recognize the level and the degree and the mountain of evidence everybody is facing,” said Mehta, a former defense attorney. “Do not think for a moment that I do not understand that.

“I understand that you’ve been given terabytes and gigabytes of information. I would bet that the vast majority of it is not relevant to a single one of these defendants. ”

The judge suggested attorneys focus on information the government seized from encrypted messenger chats and look for information on the defendants’ state of mind before, during, and after Jan. 6.

The judge did not respond to an emergency motion by attorney Jonathon Moseley, who represents Meggs, in which Moseley rapped prosecutors for “dumping a tsunami of irrelevant junk upon the defendants and calling that disclosure.”

In the April 7 motion, Moseley also accused Mehta and other judges of the District of Columbia circuit of potentially tainting the pool of prospective jurors with their public comments about Jan. 6.

“The courts and Congress have repeatedly smeared the defendants before the prospective jurors of the District of Columbia, including the presiding judge in this case and most other judges of this District, openly declaring the defendants to be guilty before their trials have started,” Moseley wrote.

Mehta was not in the mood to hear a lot of commentary from Moseley during the hearing. He cut him off at one point and said, “Mr. Moseley look, let me tell you something. You and I are going to have a long conversation about what’s going to happen with your client when everybody’s done. ”

Meggs is faced with finding a new attorney or defending himself because Moseley had his law license revoked by a three-judge panel in Virginia. Although Moseley is also a member of the U.S. District Court bar, Mehta told Meggs the DC bar would issue a temporary suspension due to the disciplinary action taken in Virginia.

“Mr. Moseley in short order will not be permitted to practice and represent you in this case, ”Mehta said.

Meggs told the judge that because of the rules at the DC jail, he will not be able to do research or even call prospective defense attorneys. “I can not even try to defend myself at this point,” he said.

Mehta said he would contact the jail and ask management to give Meggs the flexibility to make contact with other attorneys. In the meantime, he suggested Meggs ask his wife, Connie Meggs — who is a defendant in another Jan. 6 case but not jailed — to assist him in his search.

M. Hanneman is a reporter for The Epoch Times with a focus on the Jan. 6 US Capitol incursion and its aftermath; and general news in the State of Wisconsin. His work over a nearly 40-year career has appeared in Catholic World Report, the Racine Journal Times, the Wisconsin State Journal and the Chicago Tribune. Reach him at: joseph.hanneman@epochtimes.us