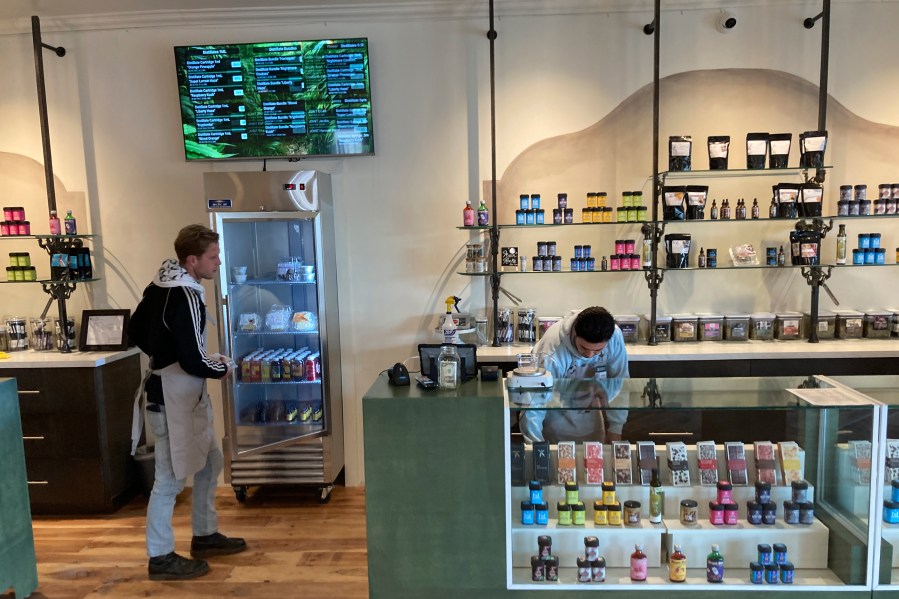 New Mexico is bringing sales of recreational marijuana to the doorstep of Texas, the largest prohibition state, as the movement toward broad legalization sweeps up even more of the American West.

As of midnight Friday in New Mexico, anyone 21 and older can purchase up to 2 ounces (57 grams) of marijuana — enough to roll about 60 joints or cigarettes — or comparable amounts of marijuana liquid concentrates and edible treats.

Across the state, would-be marijuana farmers are bidding for water rights and learning to raise their first cannabis crops, as experienced medical cannabis producers ramp up production and add new retail showrooms.

New Mexico is among 18 states that have legalized pot for recreational use, with implications for cannabis tourism and conservative Texas, where legalization efforts have made little headway.

In Clovis, New Mexico, a high plains town of about 40,000 residents less than 10 miles (16 kilometers) from Texas, Earl Henson and two business partners have pooled resources to convert a former gun shop and shooting range into a cannabis store and companion growing room at a Main Street address.

“I can’t explain how happy I am,” said Henson, a former real estate agent who says his affection for marijuana was a burden in the past. This week, he began harvesting the first crop for a cannabis store titled Earl and Tom’s. “I think these cities that are near Texas, for the next two years it is going to change their economies.”

In the state capital of Santa Fe, marijuana is going on sale across the street from the city’s newly built visitors center on a block lined with galleries, clothing boutiques and restaurants.

“I think we’re liberating a lot of hearts and souls,” he said. “It’s going to be like getting a cup of joe at Starbucks.”

Consumers initially will rely heavily on supplies from 35 legacy marijuana businesses that took root over the past 15 years. Cannabis regulators have issued more than 230 new marijuana business licenses so far — to growers, retailers and manufacturing facilities for extracts and edibles.

“This is what consumers want,” said Lujan Grisham, up for reelection in November. “We have the potential for 11,000 more workers, jobs in places where young people can work and stay, like Torrance County and Texico and Tucumcari and Raton.”

Local governments can’t ban cannabis businesses entirely, though they can restrict locations and hours of operation. Public consumption is prohibited under threat of a $50 fine for first-time infractions.

New business licenses for cannabis cafes or lounges haven’t been requested yet — leaving people to indulge in their homes or designated hotels, casinos and cigar shops.

In southern New Mexico, Mayor Javier Perea of ​​Sunland Park says marijuana retailers can set up anywhere across the small city flanked by the Rio Grande and fencing along the US border with Mexico.

He said about 30 marijuana businesses have sought authorization in the city of just 17,000 residents, banking on tourism from nearby El Paso, Texas, and Ciudad Juarez in Mexico.

Legal experts warn that people who purchase cannabis in New Mexico and chose to return home to other states could risk criminal penalties, arrest and incarceration — most notably in Texas.

Paul Armento, deputy director of the drug policy group NORML, said Texas is among the leading states for marijuana-possession arrests, and that possession of marijuana concentrates, which are legal in New Mexico, is punishable in Texas by up to two years in prison and a $10,000 fine.

Marijuana also remains illegal under federal law to possess, use or sell — a standard that applies across vast tracks of federal land and Indian Country in New Mexico.

Lawmakers in New Mexico have sought to reverse harm inflicted by marijuana criminalization on minority communities and poor households by automatically dismissing or erasing past cannabis convictions, encouraging social and economic diversity in employment and reducing financial barriers for startup businesses.

The state’s micro-business license to cultivate up to 200 plants for a flat $1,000 fee is attracting first-time commercial growers such as recently retired US Marine Kyle Masterson and wife Ivy, a Hispanic Army veteran with business consulting experience. They are raising three children and making a mid-life career shift into cannabis.

The Mastersons, residents of suburban Rio Rancho, searched more remote areas for an affordable building to cultivate high-grade marijuana under lights, settling on a vacant former movie theater in tiny Cuba, New Mexico, at the base of the Jemez Mountains.

“It felt right, it felt good and out of a vision of what we could do,” said Kyle, who served in four combat deployments to Iraq and Afghanistan. “We’re used to working out of austere environments without much direction and doing our best.”