Migrants march from south Mexico as US lifts COVID ban 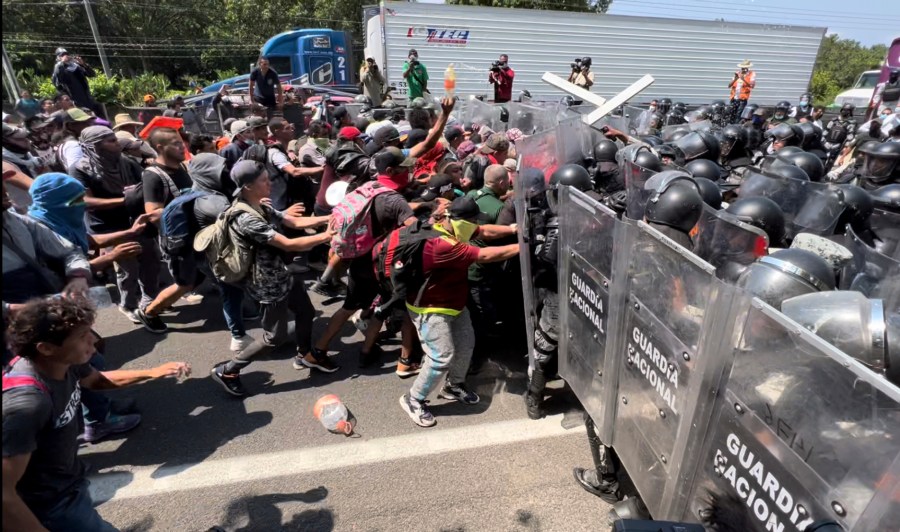 TAPACHULA, Mexico (AP) — Some 500 migrants from Central America, Venezuela and elsewhere fought with Mexican police, National Guard and immigration officers in southern Mexico Friday in one of the first such marches this year.

The migrants described the march as a traditional annual protest related to Holy Week, and those at the front carried a white cross, as others have done in previous years.

However, this year the protest came two weeks early and some participants said they would go far beyond the usual short march and try to reach the US border.

In a clash with National Guard officers and immigration agents, the migrants used the cross they were carrying as a battering ram to break through the Guard lines, shattering the wooden cross.

The officers, who had riot shields, batons and what appeared to be an irritant spray, detained some marchers. The two sides exchanged blows and many migrants left behind knapsacks in the melee.

Some managed to break through and disappear down dirt roads and paths, but many of the rest of the marchers took refuge in a church just a few miles outside of Tapachula.

The migrants set out from the southern Mexico city of Tapachula, near the border with Guatemala, early Friday. Migrants have they have been essentially confined to Tapachula by the slow processing of their asylum cases and that they are unable to find work in the border state of Chiapas that would allow them to support their families.

“They are practically holding us prisoners; they do not allow us to leave this state because we are not regularized here,” said Venezuelan migrant Noreydi Chávez. “They require us to get a visa, but we never get any answers. We fill out paperwork, but they never process it. “

Reynaldo Bello, a migrant from Peru, joined the march with his wife and baby because the family had been living a park and going hungry while waiting for their immigration paperwork to be processed.

The march came as the administration of US President Joe Biden announced it would end a policy that allows turning back asylum seekers on grounds of protecting the country against the coronavirus pandemic.

Migrants have been more than 1.7 million times from the US under the policy, known as Title 42 for a public health law, which was invoked in March 2020.

The US Centers for Disease Control said Friday it would end the authority effective May 23.

Near the height of the omicron variant in late January, the US Centers for Disease Control and Prevention had extended the order to this week.

Luis García Villagrán, an immigration activist with the Center for Human Dignification, said Mexican immigration authorities had largely shut off most visa processes in Tapachula and told migrants the only path to regularize their stay in Mexico was through the much lengthier procedure of applying for asylum or refugee status.

A migrant march in the same area was broken up in January, and similar efforts were dissolved by police and immigration agents in 2021 and 2020. The marches are significantly smaller than caravans in 2018 and 2019 that brought thousands of migrants to the US border.

The caravans began several years ago as a way for migrants who did not have the money to pay smugglers to take advantage of safety in numbers as they moved toward the US border. However, Guatemala and Mexico became more aggressive in breaking up the caravans.

The Mexican government has tried to appease the United States by stopping caravans of walking migrants and allowing reinstatement of the so called “Remain in Mexico” policy.

But Mexico has been unable to stanch the flood of migrants stuffed by the hundreds into trucks operated by smugglers who charge thousands of dollars to take them to the US border, trips that all too often turn deadly.