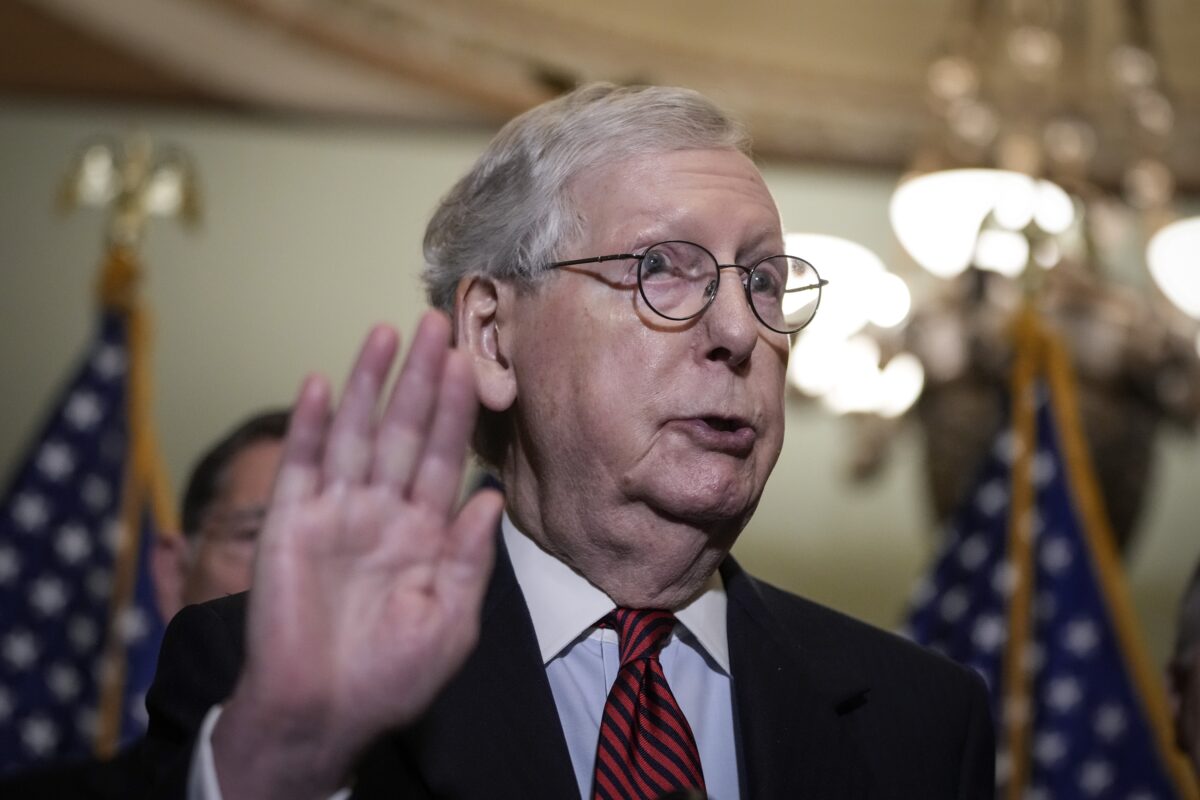 Senate Minority Leader Mitch McConnell (R-Ky.) Defended the gun agreement worked out by a bipartisan coalition of lawmakers during a June 22 speech on the Senate floor.

McConnell said the bill would protect the rights of gun owners while also undercutting gun violence.

In the wake of a school shooting that left 19 children and two adults dead, members of both parties led by Sens. John Cornyn (R-Texas) and Chris Murphy (D-Conn.) Came together to work out a gun bill that could overcome the 60-vote filibuster threshold in the Senate.

The bill, McConnell said, will “protect the Second Amendment rights of law-abiding citizens.”

The bipartisan group, led on the GOP side by Cornyn, “has put together a package of common sense and popular solutions to make these horrific incidents less likely.”

In addition, McConnell said, the bill “does not so much as touch the rights of the overwhelming majority of American gun owners who are law-abiding citizens of sound mind.”

“I’ve spent my career supporting, defending, and expanding law-abiding citizens’ Second Amendment rights,” McConnell continued. “The right to bear arms, the right to defend oneself and one’s family, is a core civil liberty.”

Breakdowns in Past Negotiations

Though Democrats have framed the agreement as a surrender on Republicans’ part, McConnell insisted that Democrats, not his party, were to blame for breakdowns in past negotiations.

“There have been attempts at bipartisan talks after horrible incidences in the past,” McConnell said. “But they fell apart when Democrats would not sign onto anything — anything — that did not roll back the Bill of Rights for law-abiding Americans.”

“Well, this time is different,” he continued. “This time the Democrats came our way and agreed to advance some common sense solutions without rolling back rights for law-abiding citizens.

“The result is a product I’m proud to support. It will send more direct funding to community behavioral health centers and for mental health and schools. It will send money, not just to states that decide to implement so-called red flag laws, but to every state, to fund crisis intervention programs of their own choosing. ”

In his speech, McConnell referenced several programs in the bill which have wide bipartisan support.

For example, the bill would grant $ 15 billion to programs to expand mental health access and to increase school safety, which many Republicans have said is more important than wide-reaching changes to gun law. To offset the $ 15 billion expenditure, the bill would delay the implementation of a Medicare drug rebate program, which proponents say will save the federal government $ 21 billion.

However, the bill also contains provisions that are far more controversial.

Most prominently, it would encourage and provide funding to states that adopt so-called “red flag laws.” These controversial laws allow the state to make the unilateral determination to take guns away from or prohibit people from purchasing guns upon receiving an anonymous tip that the person may be a danger to themselves or others.

Critics of the laws say that they abridge Second Amendment rights and deny due process to those targeted.

The bill would also place higher background check requirements on those under the age of 21, allowing the National Instant Criminal Background Check System (NICS) to search previously-hidden juvenile criminal and mental health records. If the system comes back with any concerns, these buyers could face waiting periods between three and 10 days before they can complete their purchases.

A 1996 amendment to the Federal Gun Control Act barred people convicted of “a misdemeanor crime of domestic violence” from buying or owning a gun.

Critics have been trying to get lawmakers to broaden the law to apply to people who commit crimes against their boyfriend or girlfriend. Gun control groups refer to the issue as the “boyfriend loophole.”

The new bill would expand the 1996 amendment to apply equally to a non-married significant other.

The bill, despite these controversial components, seems set to leap over the 60-vote filibuster threshold.

During a procedural vote on June 21, all 50 Democrats were joined by 14 Republicans in advancing the bill, which had been released in its final version only an hour or so before. Senate Majority Leader Chuck Schumer (DN.Y.) confirmed in a June 22 speech that it will come to the floor for a final vote by the end of the week.

“Here we are voting to move on a bill negotiated entirely behind closed doors, released only an hour ago, that no one has had time to fully read, that ignores the national crime wave & chips away instead of the fundamental rights of law abiding citizens . NO. ”

Exclusive! “Uniqueness is something I look forward to” Amruta Subhash on choosing projects

Exclusive! “Uniqueness is something I look forward to” Amruta Subhash on choosing projects

MUMBAI: Amruta Subhash is one of the most loved...

A tug of war over the future of abortion...