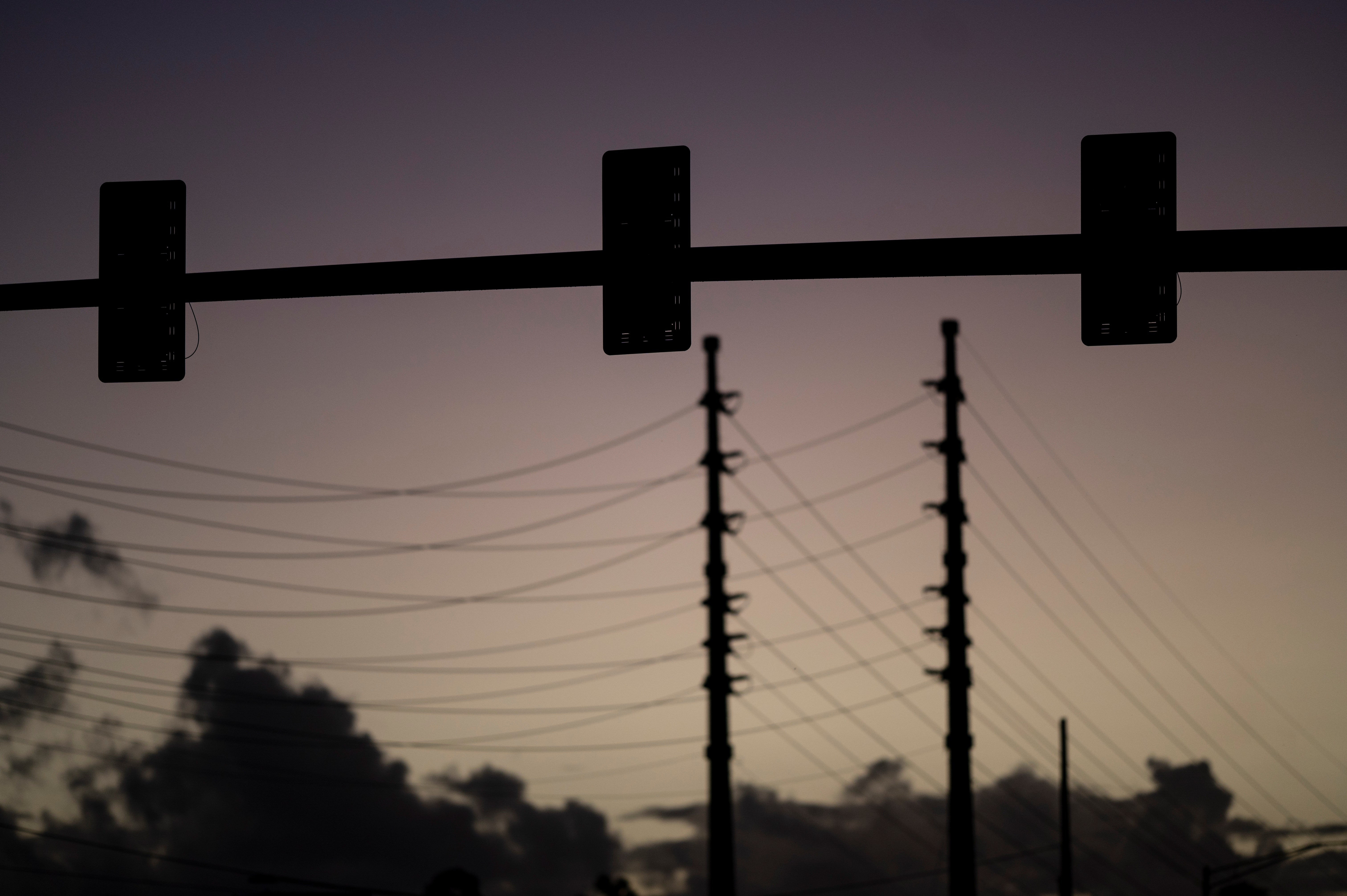 More than a million customers in Puerto Rico remained without electricity on Thursday after a fire at a main power plant caused the biggest blackout so far this year across the US territory, forcing it to cancel classes and shutter government offices.

The blackout also left some 160,000 customers without water and snarled traffic across the island of 3.2 million people, where the roar of generators and smell of diesel filled the air. Those who could not afford generators and have medical conditions such as diabetes, which depends on refrigerated insulin, worried about how much longer they’d be without power.

Long lines formed at some gas stations as people sought fuel for generators. Others tried to charge their cellphones at businesses in scenes reminiscent of the aftermath of Hurricane Maria, which struck as a Category 4 storm in 2017.

A police officer directs cars along RH Tood Avenue after a crash near an intersection during a blackout in San Juan, Puerto Rico, early Thursday, April 7, 2022.
(AP Photo/Carlos Giusti)

Officials in at least one city distributed food to hundreds of elderly people as well as ice to those whose medication must be kept cool.

SYDNEY CALLS ON THOUSANDS TO EVACUATE DUE TO FLASH FLOODING

“This is horrible,” said Luisa Rosado, a mother of two who lives in the San Juan neighborhood of Río Piedras.

She said she and her husband had sacrificed their savings to install a solar electricity system at their home after Hurricane Maria, which left them with at least partial power following the blackout.

She said her neighbors had been outraged by recent increases in power bills, which were already higher than in most US states.

Traffic piles up along RH Tood Avenue after a crash near an intersection during a blackout in San Juan, Puerto Rico, early Thursday, April 7, 2022.
(AP Photo/Carlos Giusti)

“To increase bills when you don’t provide a perfect service … the level of impunity is absurd,” Rosado said.

Luma, the company that took over transmission and distribution from Puerto Rico’s Electric Power Authority last year, said the blackout could have been caused by a circuit-breaker failure at the Costa Sur generation plant — one of four main plants on the island.

“The system is being restored a little by little,” said Kevin Acevedo, a vice president of Luma, adding that the company is trying to complete the work within 24 hours. “The people of Puerto Rico have to understand that it’s a system with a lot of years. Bringing back Puerto Rico’s system is a delicate and complicated process.”

Traffic lights are out of service on a street in San Juan, Puerto Rico, early Thursday, April 7, 2022.
(AP Photo/Carlos Giusti)

Luma said the exact cause of the interruption is unknown.

“It’s going to require an exhaustive investigation,” Acevedo said, adding that that the equipment whose failure sparked the fire had been properly maintained.

Officials said at least three generation units were back online by Thursday, with crews working to restore more.

Luma CEO Wayne Stensby called it a “very unusual” outage that “clearly indicates the fragility of the system.”

The outage occurred two months before the Atlantic hurricane season starts, worrying many about the condition of Puerto Rico’s electrical grid.

TENNESSEE WILDFIRE NOW 3K ACRES AND IS ONLY 5% CONTAINED, EVACUATIONS REMAIN IN PLACE

“Yes, the system is fragile, no one is denying that, but we’re prepared,” Acevedo said.

Police officers were stationed at main intersections to help direct traffic on Thursday while health officials checked in at hospitals to ensure generators were still running.

The outage further enraged Puerto Ricans already frustrated with an electricity system razed by Hurricane Maria in 2017. Emergency repairs were made at the time, but reconstruction efforts have not yet started, and power company officials blame aging, ill-maintained infrastructure for the ongoing outages .

First responders give medical assistance to a driver on RH Tood Avenue after a car crash near an intersection during a blackout in San Juan, Puerto Rico, early Thursday, April 7, 2022.
(AP Photo/Carlos Giusti)

A series of strong earthquakes that struck southern Puerto Rico where the Costa Sur plant is located also had damaged it.

The Electric Power Authority is also trying to restructure $9 billion worth of public debt to emerge from a lengthy bankruptcy. The company has struggled for decades with corruption, mismanagement and a lack of maintenance.

In June last year, a large fire at a substation in the capital of San Juan left hundreds of thousands without power. Another fire at a power plant in September 2016 sparked an island-wide blackout.