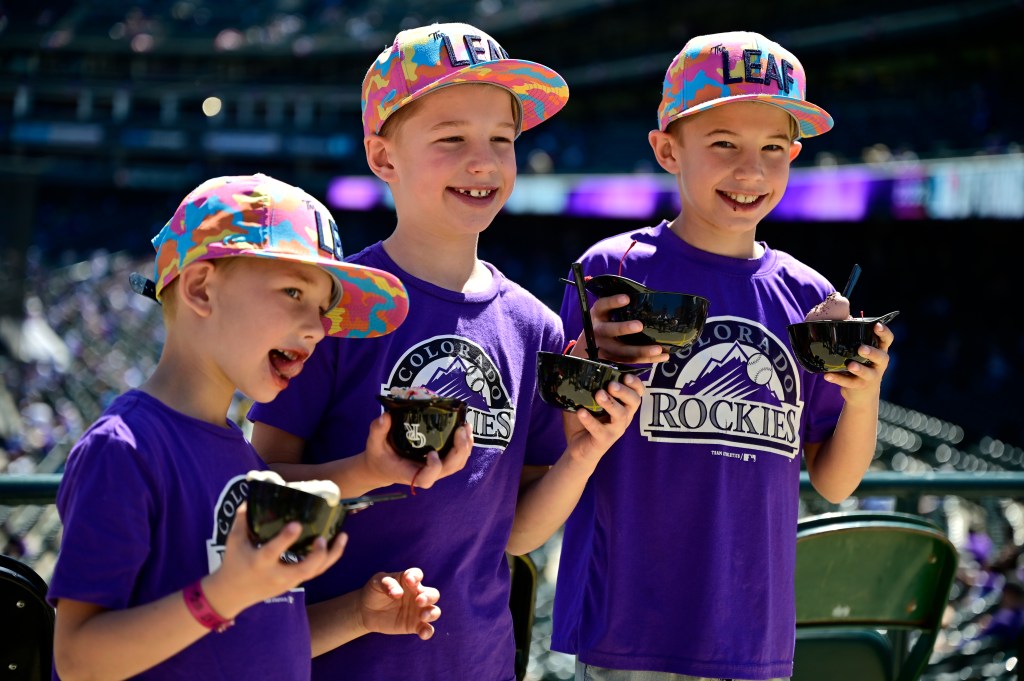 For Jeff Young and his 7-year-old son Noah, Friday was all about making memories.

That’s why the elder Young cooked up a phony doctor’s appointment to spring his son from school for the afternoon. The two rode their bikes from their Lakewood home to Coors Field for the Colorado Rockies’ opening day.

It was the first opening day game together.

“Look around. It’s amazing, ”Young said as the duo climbed the stairs to their seats in the Rockpile section in center field. “Spring is in the air. Life is back to normal. We got some lemonade. ”

“And a popcorn,” Noah chimed in, toting a large bag of the snack. “Best day ever.”

Life may not be entirely back to normal. A handful of stadium workers and others around Lower Downtown still sported masks, a visual reminder of the ongoing COVID-19 pandemic.

But after a shortened 2020 season during which the Coors Field stands sat empty and a 2021 home opener that was restricted to just 42.6% capacity, Friday’s full house of more than 48,000 felt especially festive – even if the Rockies would end up losing 5-3 to the Los Angeles Dodgers.

The main concourse was packed with fans before the game’s first pitch, hometown purple drowning out patches of visiting Dodgers blue. Out on the street, drumming buskers added a pulsing soundtrack to a LoDo humming with energy.

“For me, opening day is Denver’s Mardi Gras,” 51-year-old Robert Phifer said as he stood near the corner of 20th and Market streets.

Phifer was hanging out with his nephew, brother and son, Dominic Phifer, who recently got out of the Marine Corps after five years of service and was spending his first opening day in LoDo. The group did not have tickets for the game. They planned to bar-hop and soak up the atmosphere.

“The vibe down here is great. There’s nothing like it, ”Robbert Phifer said. “That’s why I wanted to experience it with my son.”

LoDo is a different place than it was pre-pandemic. Former staples of the neighborhood like the El Chapultepec jazz club have closed while new things like megabar Dierks Bentley’s Whiskey Row have opened up.

Friday was the first opening day since the McGregor Sqaure development was completed last summer. The block-spanning megaproject just across 20th Street from Coors Field was developed by Rockies co-owner Dick Monfort and is designed to be an extension of the ballpark experience, showing game action on a giant screen above its central plaza.

Darius Johnson, 27, came to McGregor Square to hang out with friends heading into the game, joining the scrum in the plaza area. For Johnson, who has a YouTube channel called “SportsBS,” going to opening day checked an important box on his fan bucket list.

“I’m a Colorado native, so from the day I was born until the day I died,” Johnson said of his Rockies fanhood.

Alix Finnegan, also a Denver native, recently moved back to Colorado after a decade away, allowing her to continue her tradition of attending opening day games. Logan Thurnauer, who moved with Finnegan to Denver at the beginning of the pandemic, was more excited about the large turnout and excitement of the crowd than the game itself.

“She’s the baseball fan,” Thurnauer said of Finnegan as the two hung out in the raucous plaza.

By the time the game began with fireworks and a military flyover, many in McGregor Square were visibly intoxicated. Others, like Jaime Lopez, were enjoying a more family-friendly opening day.

Lopez, who came with his wife and twin daughters from Phoenix for the weekend, has made a tradition of bringing his 5-year-olds to an opening game for different major league baseball teams every year.

“This past year they’ve really started to enjoy ballparks and games in general,” Lopez said. “Now they can sit through a whole game, where before it was a little tough to keep them still.”

Family traditions were on display all over LoDo on Friday.

Joyce and Del Olivas came into town from Pueblo for the game, their first opening day since before the pandemic. The couple planned to meet their daughter and her friends at McGregor Square before the game. Their grandson was coming down from Boulder where he attends the University of Colorado. They expected more than a dozen people to be sitting with them in the stands.

The family started going to baseball games together all over the country when the Olivas’ grandson was in little league. But opening day at Coors Field is a special occasion.

She was looking forward to having hot dogs and beer in the stands and hoped Rockies stalwart Charlie Blackmon would hit a home run.

But she was also looking forward to the seventh inning stretch when “Take Me Out to the Ball Game” is played. The song reminds her of her late dad. The couple last went to a Rockies game with him in the mid-1990s. He was in a wheelchair then, but when that song came over the speaker system he was energized.

“He just sang his heart out,” she remembered. “During the seventh-inning stretch, I get choked up every year.”