Less than 20% of Russian troops around Kyiv are ‘repositioning’: Pentagon on Day 35 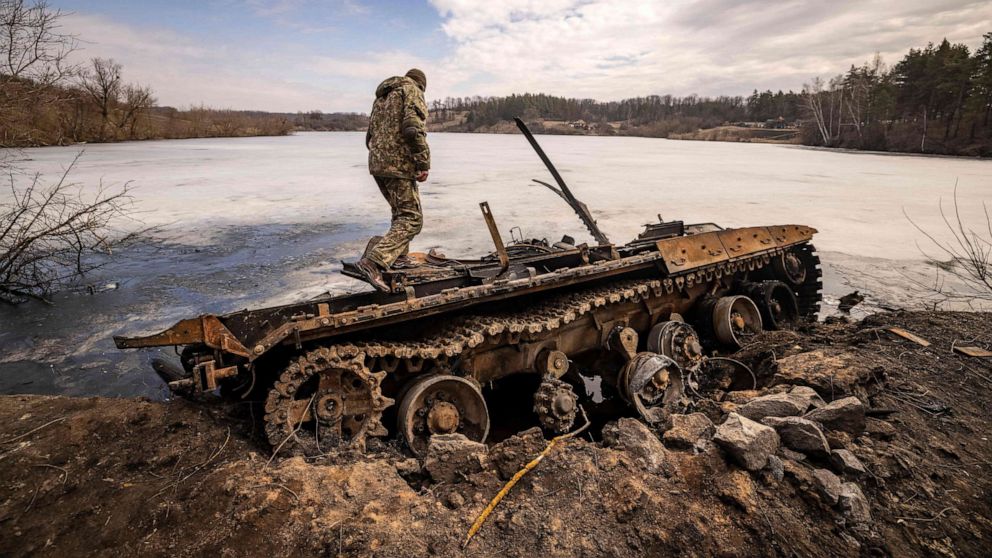 The Pentagon says its concerned about Putin being misinformed by advisers.

Over the last 24 hours, the Pentagon has seen “less than 20%” of the Russian troops that had been around Kyiv moving northward as they “reposition” into Belarus so they can be re-equipped for possible action in eastern Ukraine, the Pentagon’s top said Wednesday.

Also, The White House said Russian President Vladimir Putin is being misinformed by his top advisers about military developments in Russia, a development that the Pentagon labeled as “disconcerting.”

“We have seen over the last 24 hours the repositioning of a small percentage of the troops and the battalion tactical groups that Russia had arrayed against Kyiv,” Pentagon Press Secretary John Kirby said Wednesday. “Probably in the neighborhood of 20% of what they had, they are beginning to reposition some of those troops.”

Specifically, Kirby said the Russian troops near the Hostomel airport north of the city have been seen moving north towards Belarus. The airport had been the scene of heavy fighting from the opening hours of Russia’s invasion.

Separately, a senior US defense official said some Russian troops had also been seen moving out of the Chernobyl nuclear facility. However, it remained unclear if they would all be leaving.

Some of those troops are being moved into Belarus, said Kirby, who added that none of the units have been seen returning to their home bases.

“If the Russians are serious about de-escalating, because that’s their claim here, then they should send them home, but they’re not doing that, at least not yet,” Kirby said. “That’s not what we’re seeing.”

Kirby said he was intentionally using the term reposition instead of a withdrawal to describe the movement of Russian forces “because the way it’s being spun by the Ministry of Defense is that they’re that they’re pulling back and they’re trying to de -escalate and depressurize the situation and we just don’t believe we haven’t seen any evidence of that.”

Instead, Kirby said the US assesses that the Russians are “going to refit these troops, resupply them, and then probably employ them elsewhere in Ukraine.”

A senior US defense official said US intelligence believes that Russia may intend to shift some of these troops towards the fight in the Donbas region, which would be in line with public statements from Russian officials that they want to make that region a priority of their operations .

Even as some of the Russian troops around Kyiv move away, Kirby and the rest have established defensive positions. Kirby noted that Russian forces continue to launch missiles and artillery at the city and surrounding suburbs.

Kirby said that without getting into intelligence, the Pentagon concurred with comments in news reports attributed to a US official that Putin is not being fully advised of Russia’s performance on the battlefield in Ukraine.

“We would concur with the conclusion that Mr. Putin has not been fully informed by his Ministry of Defense at every turn over the last month,” Kirby said Wednesday.

Kirby described that assessment as “disconcerting” and “an issue of concern.”

“The fact that he may not have all the context, that he may not fully understand the degree to which his forces are failing in Ukraine, that’s a little discomforting, to be honest with you,” Kirby said.

“If he’s not fully informed of how poorly he’s doing, then how are his negotiators going to come up with an agreement that is enduring? Certainly one that respects Ukrainian sovereignty,” he added.

“The other thing is you don’t know how a leader like that is going to react to getting bad news,” Kirby said. ,