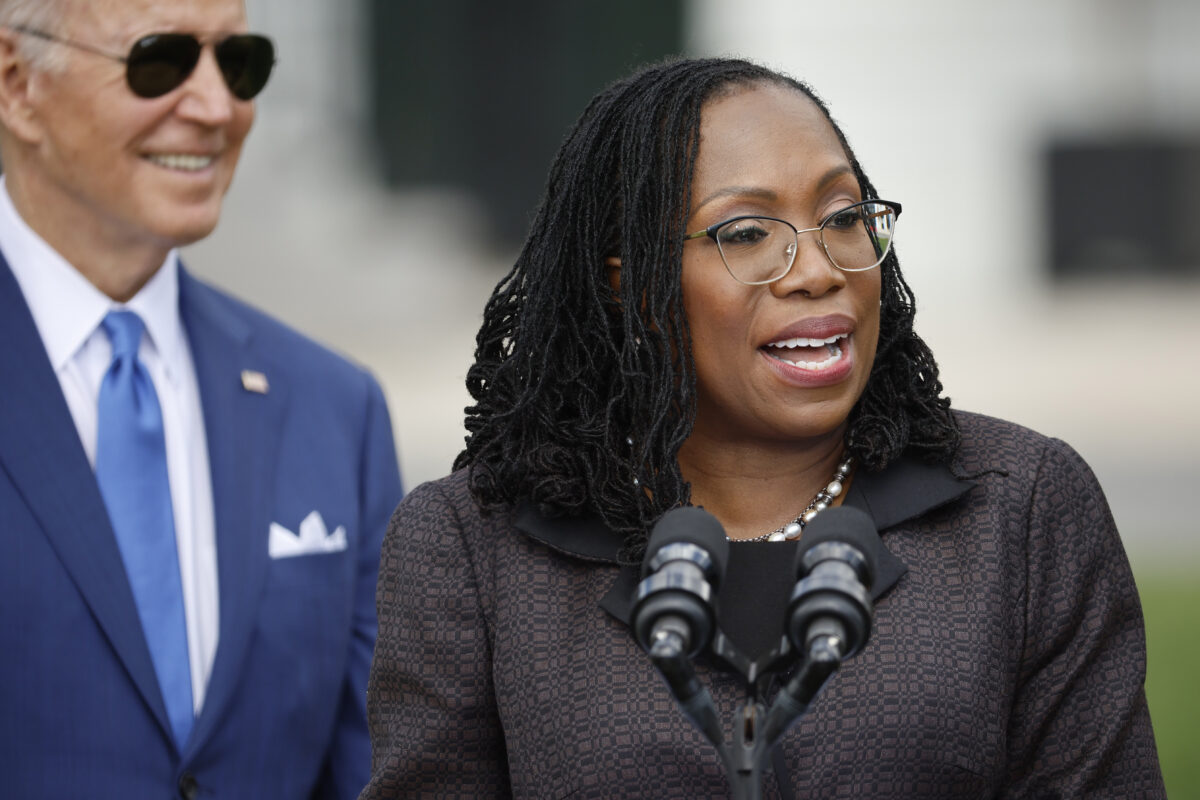 Fresh off being confirmed by the Senate, soon-to-be Supreme Court Justice Ketanji Brown Jackson said on April 7 that she will seek as a member of the nation’s top court to uphold the rule of law and not overreach into the domain of Congress.

Speaking at the White House in Washington, Jackson thanked a slew of people, including her family and President Joe Biden, in remarks that touched on how she plans to decide on cases when she assumes her new role.

Jackson said at one point that “part of the genius of the constitutional framework of the United States is its design, and that the framers entrusted the Judicial Branch with the crucial but limited role,” echoing a stance she brought up repeatedly during her confirmation hearings when questioned about the light sentences she gave people who committed crimes involving child pornography.

“I’ve also spent the better part of the past decade hearing thousands of cases and writing hundreds of opinions. And in every instance, I have done my level best to stay in my lane, and to reach a result that is consistent with my understanding of the law, and with the obligation to rule independently, without fear or favor, ”Jackson said, referring to her time as a judge on a US district court and, more recently, on an appeals court.

“I am humbled and honored to continue in this fashion as an associate justice of the Supreme Court of the United States, working with brilliant colleagues, supporting and defending the Constitution, and steadfastly upholding the rule of law,” she said.

During the hearings, Jackson drew criticism for refusing to answer some questions, including how she would define the word “woman,” while she generally declined to elaborate on her judicial philosophy.

The opportunity for Biden to appoint Jackson came after Justice Stephen Breyer decided to step down nearly three decades after he was appointed by President Bill Clinton.

Jackson once clerked for Breyer. On Friday, she took time to praise Breyer’s “commitment to an independent, impartial judiciary” and “the rule of law,” suggesting she may approach cases similar to the way he does.

Breyer, until he retires at the end of the current term, is one of three justices appointed by Democrat presidents. They routinely vote together on cases.

The six others were appointed by Republicans, including three by President Donald Trump. Those six often split on decisions.

Biden pledged during the 2020 campaign to pick a black woman if he had the chance to make a Supreme Court appointment and Jackson is poised to be the first black woman to serve on the court.

Biden as a senator was one of several Democrats who worked to block the appointment of Judge Janice Rogers Brown, who is black, to a federal appeals court, and he said he would try to block her from serving on the Supreme Court if she were appointed .

Biden said Thursday that “we’re going to look back and see this as a moment of real change in American history,” adding tat he believes Jackson will be a fair and impartial justice.

Jackson said she’s received thousands of notes, cards, and photographs expressing what the moment means to various people, including children.

“It has taken to 232 years and 115 prior appointments for a black woman to be selected to serve on the Supreme Court of the United States. But we’ve made it. We’ve made it all of us, all of us, ”she said, drawing applause. “And our children are telling me that they see now more than ever, that here in America, anything is possible. They also tell me that I’m a role model, which I take both as an opportunity and as a huge responsibility.

“As I take on this new role, I strongly believe that this is a moment in which all Americans can take great pride,” she added. “We have come a long way toward perfecting our union. In my family, it took just one generation to go from segregation to the Supreme Court of the United States. And it is an honor, the honor of a lifetime, for me to have this chance to join the court to promote the rule of law at the highest level and to do my part to carry our shared project of democracy and equal justice under law forward into the future. ”