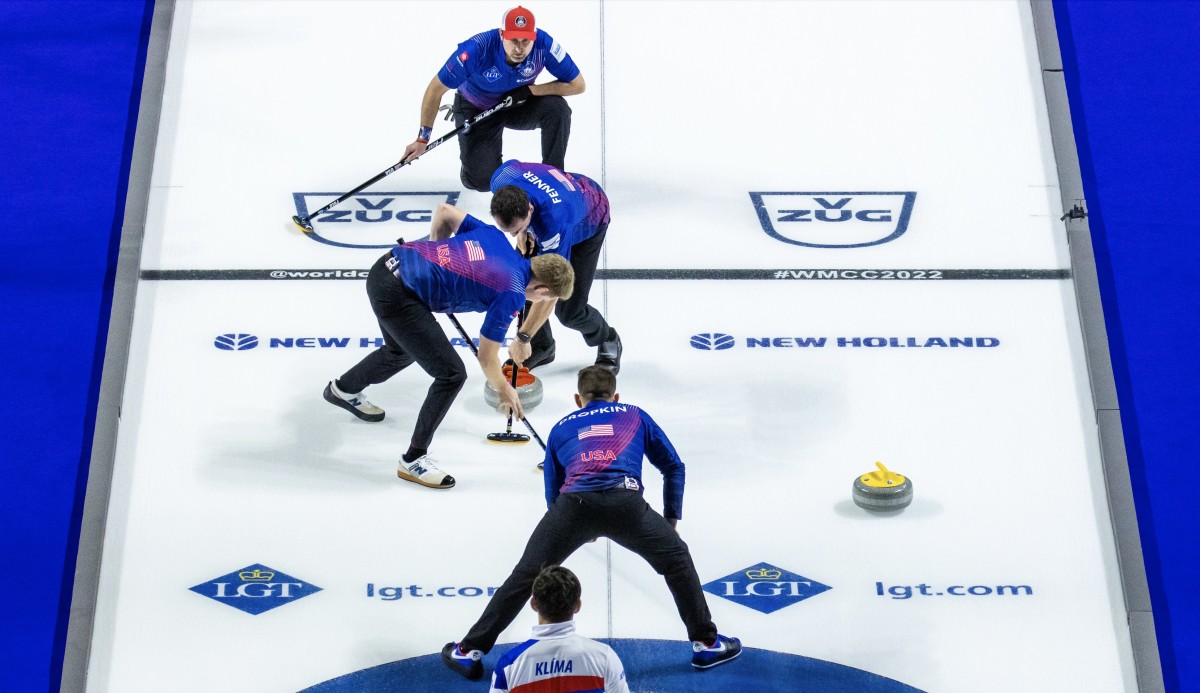 Italy has continued its hot streak into the playoffs of the 2022 World Men’s Curling Championship in Las Vegas, NV.

Joel Retornaz’s foursome has now won five matches in a row and finished the round robin in third place at 8-4. Their second and third consecutive victories came on that crazy Thursday, in which they defeated Switzerland on a time violation and beat Czech Republic despite losing a player to expulsion.

The win streak is starting to resemble the roll Italian third Amos Mosaner was on at February’s Olympic Winter Fames in Beijing, where he and mixed doubles partner Stefania Constantini crushed the entire field to win Olympic gold.

That was Italy’s first curling championship title. This Retornaz Run also marks the first time Italy have reached the playoffs at any (adult) world championships.

Italy will face the Swiss in one of two playoff qualification matches on Saturday, with the winner facing Sweden (9-3) in one of two semifinals. Yannick Schwaller’s Bern squad advanced despite a 6-6 round-robin record when Korea lost their last round-robin game 8-7 in an extra-end to Netherlands.

In that match, Korea skip Kim Soo-Hyuk made one of the greatest curling shots ever seen. In the 10th end, with one second left on his time clock, Kim played an in-off on a very long guard just off the side cushion against three Dutch counters. He stuck the shooter to score one point and force an extra end.

Korea and Germany also finished 6-6 yet—due to Draw Shot Challenge score—missed out of the playoff picture. There are no tiebreakers at the world championships.

The other playoff qualifier sees hosts USA (7-5) battle Scotland (7-5) with the winner to face first-place Canada (10-2) in the semifinals.

“We tried not to be too worried,” said Waddell. “I’m really happy with where we’re at, especially after the bad day yesterday, we felt we didn’t do ourselves justice yesterday.”

“We’ve struggled to get hammer all week, and now we don’t have to worry about it,” said Gushue. “That’s an advantage to have, especially if we come up against Nik in the playoffs.”

Nik, of course, refers to Swedish skip Niklas Edin, the three-time defending world champion and owner of three Olympic medals in all colors.

Edin and his Bejing Olympic champions edged Norway 7-6 in their round-robin finale to clinch second place and a critical semifinal berth.

“That was a super important win,” said Edin. “That was the frustrating part when we couldn’t control the ice, we didn’t play well in that game and we’re lucky to win it. Making the semis is a big relief.”

Norway and Czech Republic finished 5-7 while Finland wound up at 4-8. The Dutch finished 3-9 while Denmark finished 2-10.

A USA win over Scotland would continue to validate Korey Dropkin’s impressive showing at the Orleans hotel/casino. After losing back-to-back playoff matches to John Shuster at the Olympic Trials, the youthful Dropkin team was nominated to represent the USA in Las Vegas.

The team has played solid curling, winning two key matches a day before they upset Canada by a 10-6 count.