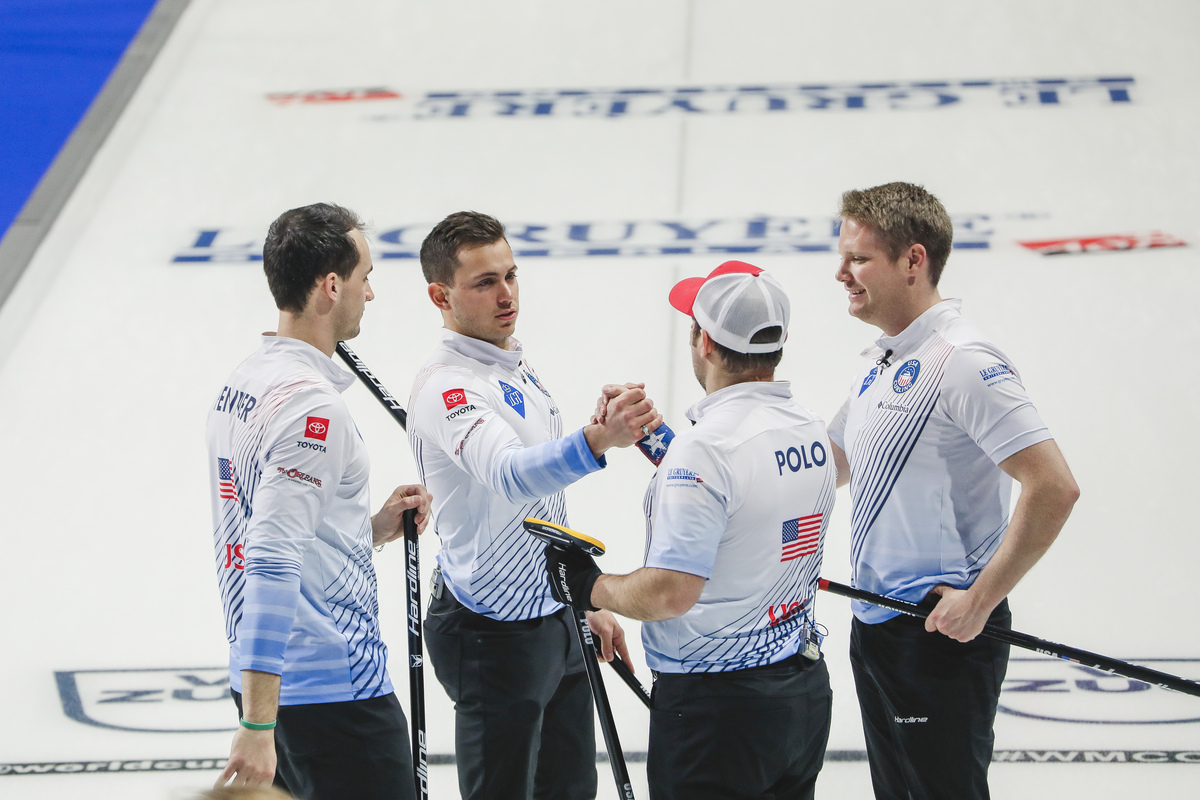 The teams came into Friday morning’s 18th session of round-robin play looking to take a step closer to joining Canada and Sweden in the play-offs.

Italy defeated Norway, 9-6, in an extra end and United States beat Finland, 7-2, to move onto seven wins and four losses. With other results in the session, this secured two of the remaining four play-off places.

In a tight opening half, Norway and Italy traded single points to give Norway a 3-2 lead at the break.

Italy took control in the second half of the game, scoring two points in the sixth end when skip Joel Retornaz played an open draw into the eight-foot.

Italy stole a single point in the seventh end, then stole another single point in the eighth end, when Ramsfjell was left with a difficult promotion take-out to remove an Italian stone from the button. His attempt went wide to give Italy a 6-3 lead.

Norway scored two points in the ninth, then stole one in the tenth to take the game to an extra-end, after Retornaz was left with a tough draw to the button that came up just short.

In the extra-end, a double take-out by Retornaz scored three points for Italy, giving them a 9-6 win and a place in the play-offs for the first time in their history.

Retornaz said afterwards, “We’re super happy for making it into the play-offs! We knew we needed this win and then we should have looked at the rankings. There’s another game for the round-robin [tonight] and we need to play very well to keep the groove for the play-offs.”

United States blanked the first end, then scored two points in the second in their game against Finland in this session.

United States then stole a single in the third as Finland skip, Kalle Kiiskinen was unable to remove the American stone sitting on the button with his hit-and-roll attempt.

The Americans stole a single in the eighth, when Kiiskinen’s double take-out attempt could only remove one American stone. After which, Finland conceded, giving United States the 7-2 win which secured their place in the play-offs.

Dropkin said afterwards, “This is exactly where we want to be. We knew going into this week we were going to have a lot of tough matches. We’re in a good position.”

Looking ahead to their final round-robin game in the evening session against Italy he added, “They’re just as hungry as us, and they’re playing great out there so we’re looking forward to it.”

Canada opened the scoring in their game against Scotland with a single in the first end, then scored two more points when skip Brad Gushue played a precise draw into a busy house to take a 3-2 lead.

Canada then stole a single point in the fourth end, after Scotland’s Ross Paterson was heavy with his final draw to increase their lead to 4-2.

Then, in the ninth, Scotland’s Paterson played a difficult double angle-raise take-out of a Canadian stone in the four-foot to score two points and level the game at 6-6 going into the tenth end.

In the tenth, when facing two Canadian counters, Paterson flashed his double take-out attempt giving Canada a score of two points without having to throw their last stone and the 8-6 victory.

Germany opened their game against Switzerland with a score of three points when their skip Sixten Totzek played a draw to the eight-foot.

Germany then stole three points in the second end when Swiss skip Yannick Schwaller missed with a take-out attempt, giving Germany an early 6-0 lead, then stole a single in the third.

They scored another three in the fifth end when Totzek played a hit-and-stay on a Swiss stone in the four-foot. Germany went on to win 10-3.

Engage with the World Curling Federation at the LGT World Men’s Curling Championship 2022 on TwitterInstagram, Facebook and Weibo and be searching the hashtags #WMCC2022 #curling