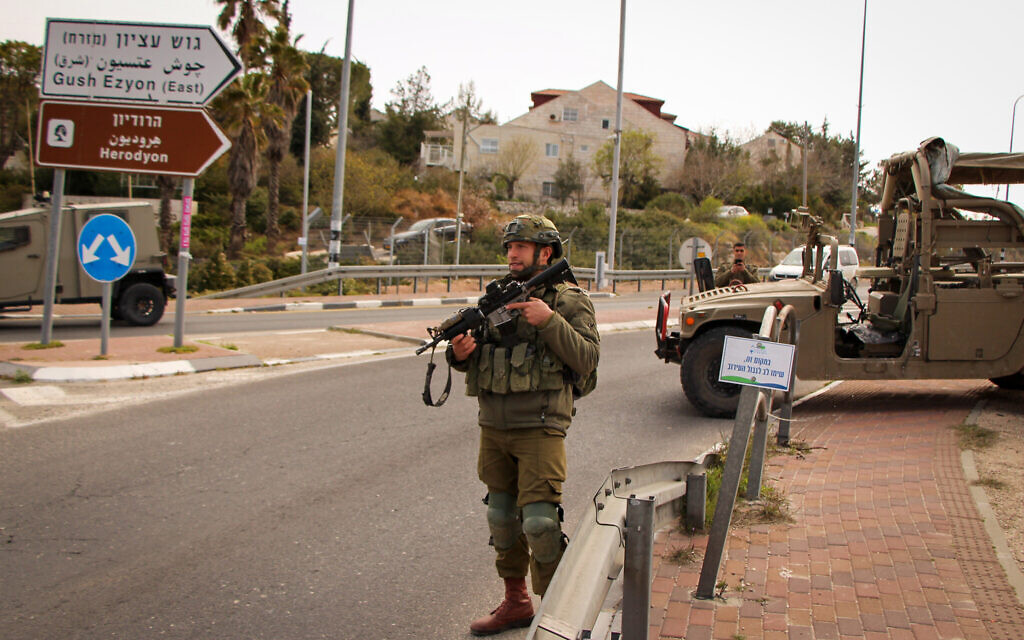 Eleven people have been killed in Israel in three separate terror attacks over the past week, the largest weekly toll since 2006 at the tail end of the Second Intifada. The shooting spree on Tuesday night outside Tel Aviv, which claimed the lives of five people, was the single deadliest terror attack since the 2014 Har Nof synagogue massacre.

These three attacks do not appear to have been coordinated in any way, nor were the perpetrators connected to one another: The first in Beersheba and the second in Hadera were carried out by Arab Israelis affiliated with the Islamic State terror group, while the third, in Bnei Brak, was carried out by a Palestinian allegedly part of Fatah’s Al-Aqsa Martyrs’ Brigades, which is ideologically opposed to Islamic State.

Unlike the first two attacks, which appear to have been carried out by terrorists acting independently, Tuesday night’s attack appears to have related on a larger terrorist network. The gunman, Diaa Hamarsheh, 26, entered Israel illegally from his hometown, the West Bank village of Yabed near Jenin, and only then obtained the M-16 assault rifle that he used to carry out his deadly shooting spree, according to initial assessments by Israeli security forces. How exactly he crossed into Israel, and who provided him with the weapon, was not immediately known.

Rather than being part of a directed campaign by a terrorist organization, each of the attacks seems to have organically inspired the next. Israeli security officials refer to this phenomenon as “attack begets attack.” It is a deadly cycle with the potential to snowball into yet greater violence, which Israeli security forces have been fighting — and so far failing — to disrupt.

The attacks have come amid a comparatively calm period in Israel’s restive history, with the past three years seeing record low numbers of people killed in terror attacks within Israel proper and the West Bank.

The large body counts and the locations of the attacks, in completely different parts of the country — well outside the general terror hotspots of the West Bank and Jerusalem — have deeply shaken Israelis’ sense of security, calling to mind the randomness and deadliness of the attacks of the Second Intifada. 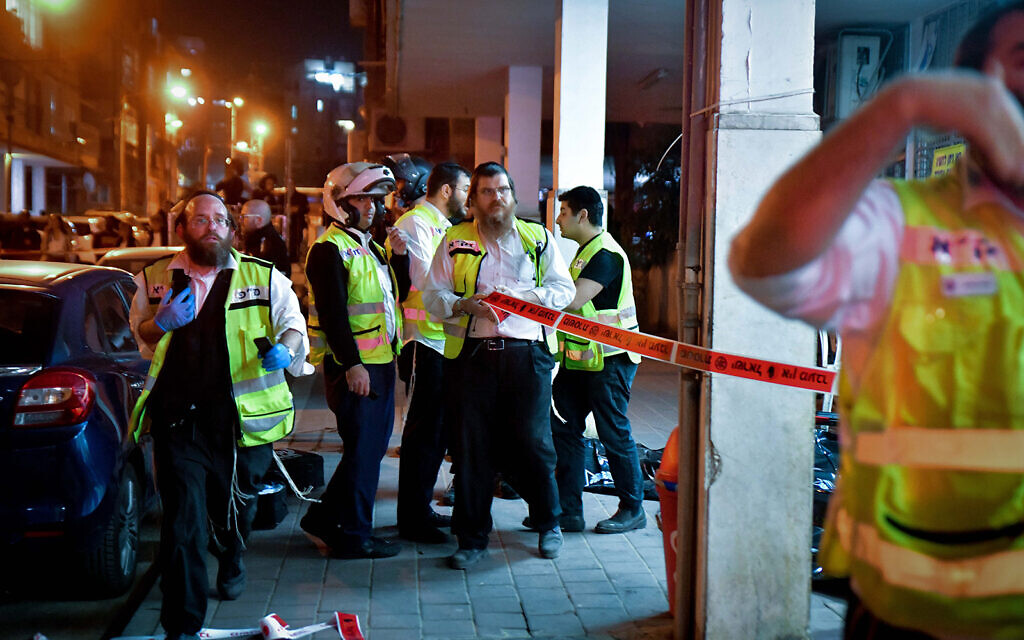 Israeli police and rescue personnel at the scene of a deadly terrorist attack in Bnei Brak, on March 29, 2022. (Avshalom Sassoni/Flash90)

This is also the first time that the current coalition has had to contend with a major outbreak of violence. While Defense Minister Benny Gantz, who previously served as IDF chief of staff, has significant on-the-job experience in such matters; other members of the government do not, including Prime Minister Naftali Bennett and Public Security Minister Omer Barlev.

To break this “attack begets attack” cycle, the Israel Defense Forces has deployed 12 additional battalions, representing several thousand soldiers, to the West Bank as reinforcements. Two more battalions were also sent to the Gaza border in case the current calm situation there also heats up. In the West Bank, Israeli troops are stepping up crackdowns on terror suspects, setting up random roadblocks and increasing patrols of likely sites of attacks, such as bus stops and entrances to settlements.

After the attack, the IDF launched a major raid in Hamarsheh’s hometown, detaining his brother and a number of other people suspected of helping him carry out the attack or at least knowing about it and failing to prevent it.

The Israel Police has similarly deployed reinforcements throughout Israel proper and placed officers on the highest possible alert level, which it has not done since the brutal unrest that swept through the country last May, which saw major rioting and internecine violence in Israeli cities.

This heightened alert level meant police officers were ordered to prioritize patrols and other security operations over less immediately pressing investigations and other nonessential police work.

Police have also set up roadblocks and checkpoints along major highways throughout the country and deployed Border Police units to the area of ​​Wadi Ara, a northern valley populated mainly by Arab Israelis and the location of the city of Umm al-Fahm, where the terrorists who carried out the deadly shooting attack in Hadera on Monday night hailed from. 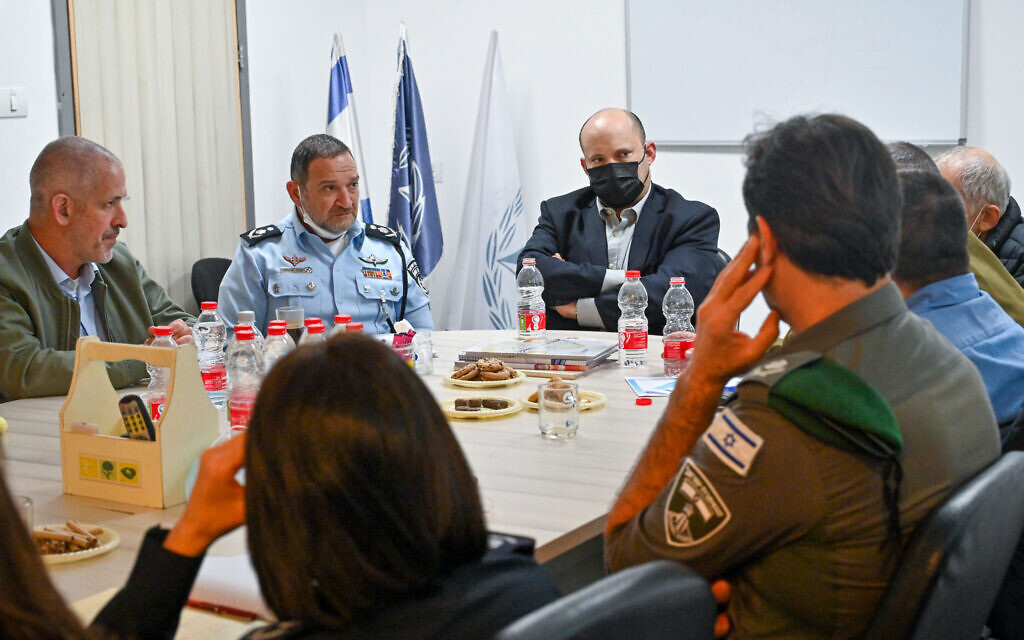 Prime Minister Bennett holds a situation assessment together with Israel Police Inspector General Kobi Shabtai and other senior members of the security forces at Hadera police station, hours after a deadly terror attack in the city, March 27, 2022. (Kobi Gideon / GPO)

However, despite growing calls from right-wing lawmakers and activists for more heavy-handed crackdowns and collective punishment against Arab Israelis and Palestinians, security forces generally resist such measures, seeing them as ultimately being counterproductive.

Though some cities in Israel and settlements in the West Bank have limited the entrance of Palestinian workers out of alleged safety concerns, no orders or recommendation to do so were issued by the military or Shin Bet security service.

While aggressive policies may placate angry and scared Israelis and project a sense of strength against Palestinian terror groups plotting additional attacks, excessive belligerence has a tendency to backfire, resulting in more — not less — violence, the military has found.

Israeli security forces, therefore, try to strike a balance, maintaining a significant presence on the streets with an ability to respond quickly and forcefully and conducting proactive operations to disrupt plots, while also not interfering unnecessarily in the lives of average Palestinians. 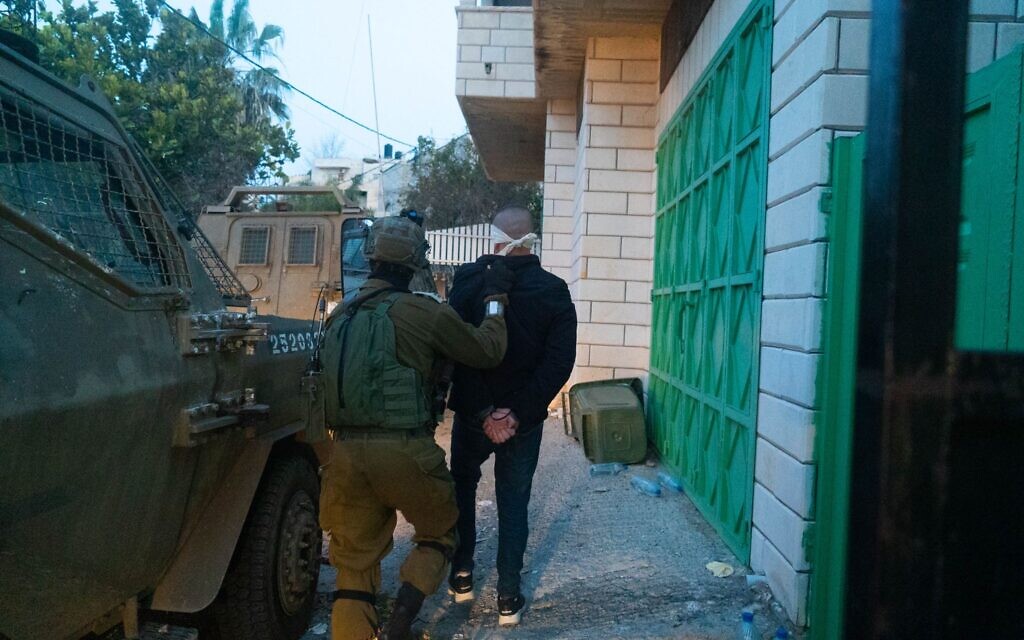 Former IDF chief of staff Gadi Eisenkot, whose tenure saw a massive wave of Palestinian violence in late 2015 and early 2016, largely pioneered this strategy, often facing major blowback from right-wing Israelis for it.

The past week’s attacks came just ahead of the Muslim holy month of Ramadan, which regularly sees periods of increased violence in Israel and the West Bank. In recent weeks, the Israeli government has been planning to roll out a series of measures meant to mitigate these tensions. This includes granting Palestinians greater access to the Temple Mount, allowing for Palestinians in the West Bank to more easily visit their family members inside Israel and increasing the number of people from the Gaza Strip who can work in Israel, among other things.

Though the fate of these goodwill measures remains unclear, Gantz told Palestinian Authority President Mahmoud Abbas that they were contingent upon him issuing a condemnation of Tuesday night’s attack. Abbas indeed denounced the attack in a statement carried by the PA’s official mouthpiece, Wafa.

The coming days will be critical for Israeli forces as they attempt to break up the cycle of attacks and restore both security and Israelis’ sense of it.